Area netters come up short at 3A tournament

Three area teams that competed in the Arizona 3A volleyball state playoffs were ousted on Saturday.

And although they came up short, they put up a big fight as Monument Valley, Tuba City and Winslow ended their season in the Round of 16. 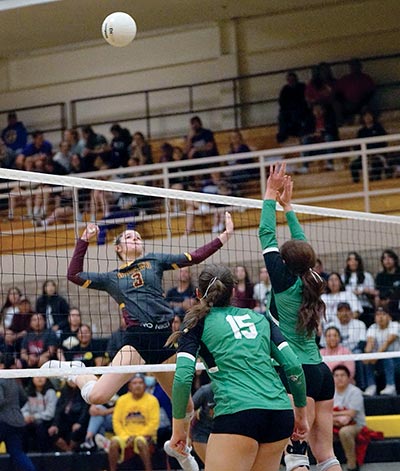 MV and Tuba went the distance as they lost in five sets while the Winslow Lady Bulldogs took No. 4 seed Thatcher to four sets.

“Looking at the scores, this doesn’t look like a No. 4 and No. 13 match,” longtime Winslow coach Julie Thomas said. “I’m not sure if they came in thinking that it would be 3-0 and us being out.

“They had to play well to beat us,” she added. “They had to dig deep because they didn’t walk over us. It was a battle all the way through and they kept in their starters, so that tells me they respected us.”

The Lady Bulldogs opened up a 9-3 cushion and despite a few surges by Thatcher, Winslow eked out a 26-24 win in the first set.

In the next set, the margin stayed within three points until Thatcher used a 10-3 run to open up a close game, winning 25-16.

The two teams continued to battle in the third set as Thatcher erased a three-point deficit and led 22-18 behind seven service points from Marley Motes.

Winslow tied the match at 23-all, but the Eagles scored the game’s final two points.

With the momentum, Thatcher closed out the fourth set by knocking down a dozen kills for a 25-19 win.

“They’re (Thatcher) is a good serving team, so we struggled a little bit with serve-receive,” Thomas said.

The Bulldogs will be losing six seniors and some of those players were part of the one-win season their freshmen year. 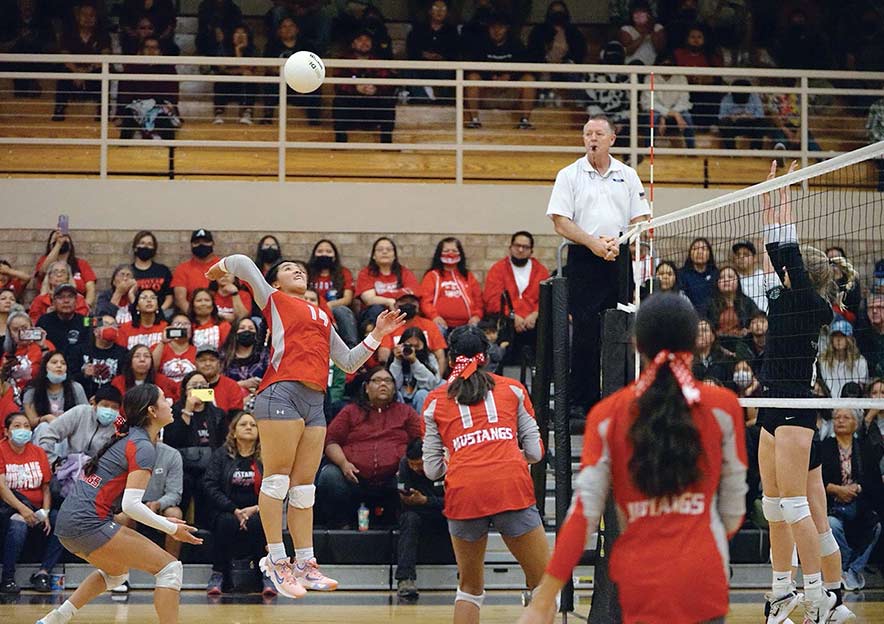 In a tough outing, the ninth-seeded MV Lady Mustangs saw a 2-0 advantage slip away as the Gilbert Christian Lady Knights rallied back in a five-set thriller.

“Knowing that we had two sets, I reminded the girls that it was not over and we had to keep fighting for points,” MV coach Rennell Gilmore said. “And, you know, every set that went by, we struggled and struggled.”

In the final set, Gilbert Christian opened up a 3-0 lead and extended that into a 6-2 cushion.

“Once they got the early lead it was hard to recover from that,” Gilmore said.

MV will be losing only one senior with setter Shantel Denetsosie is set to graduate next May.

“I feel like this season was a lot about maturity,” Gilmore said. “Obviously, they got a better understanding of how things are recorded in the state rankings. You know, every game counts whether it’s a win or a loss.

“They got a better grasp of how it works for the next few seasons,” she added. “Some of them are juniors and sophomores so we have a pretty young squad.”

As for Denetsosie, Gilmore said her pupil was tasked to take the leadership role, being that she was the only senior of the squad.

“She expressed that it was challenging, but we did remind her that is how life goes sometimes,” the MV coach said. 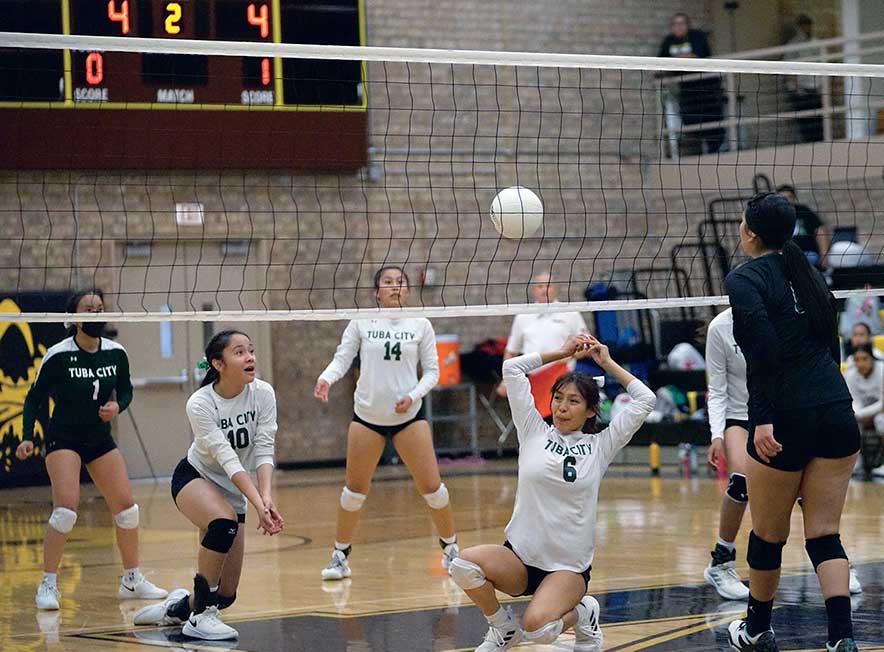 As the highest seeded team from the area, No. 6 seed Tuba City played No. 11 Tucson Tanque Verde down to the wire.

“The momentum of the game was vivid, everything about it was electrifying,” Tuba City coach Brittney Laughter said. “There were moments when we had a large point deficit, but knew we had time to come back and make it interesting.

“Not once did I see my athletes shut down and give up,” she added. “They worked hard for everything; they knew it was going to take everything they had. I knew prior to the game they were ready; their confidence was different, they wanted this win more than anything, that’s what kept them alive every set.”

In the final set, the Warriors battled back from an 11-8 deficit and led 13-12, but Tanque Verde scored the last three points to cap the five-set marathon.

“Momentum comes and goes,” Laughter said while adding that Tanque Verde’s last string of points were a result of her team being in the wrong place at the wrong time.

“I always speak to my girls about capitalizing and executing certain plays,” she said. “Those last few points we just didn’t do that.”

With 10 seniors set to graduate, Laughter is anticipating a rebuilding year next season.

“That doesn’t mean we won’t be fighting for that high ranking,” the Tuba City coach said.

Laughter said the season was taxing, but she’s happy with where her they finished.

“I’m very thankful for this season’s team,” she said. “The coaches and athletes sacrificed their time, putting in work … always pushing themselves both on the court and classroom.”