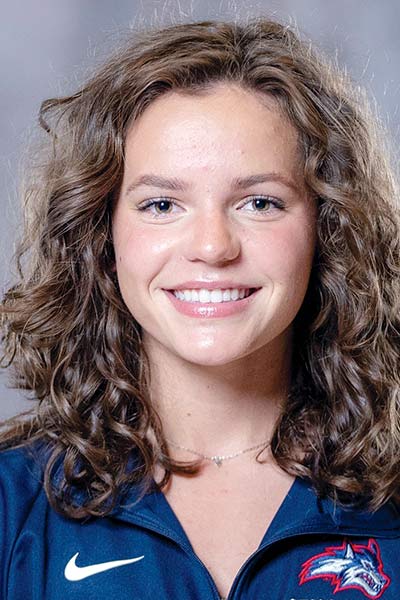 The Farmington High School graduate won the 200-yard breaststroke and 200 individual medley for Stony Brook University (N.Y.) in its opener.

The freshman swimmer also was part of the winning 200 medley relay team as Stony Brook won the meet.

“The competition was good. They did go out fast. I had confidence I would get ahead of them,” she said. “I really didn’t think I was going to do that well.”

Women’s head swimming coach Mark Anderson said Talcott’s drive and her willingness to push herself” are her strengths.

“She’s very determined. She’s confident in herself,” he said.

All the colleges that showed the most interest in her out of high school were far from home, Talcott said.

She reached out to Stony Brook and said she and the coaches exchanged emails. She said she visited the campus during last year’s Thanksgiving break and made her choice.

To prepare for the season, she did double practices during the summer, when she trained three days a week. “I take my summer season very seriously,” she said.

Anderson hadn’t seen her swim in person until she reported to school. “I knew she had what it would take to make her a really good breaststroker,” he said.

She used the preseason to correct her technique. For the breaststroke, her favorite event, she improved her pull and kick.

“Pull wider with my arms,” she said. “I was kicking too wide, so kicking narrower and keeping my knees closer together.”

Talcott worked on having a faster arm speed and learning a crossover turn from the backstroke to the breaststroke in the individual medley race. The crossover turn is a faster technique and “definitely more complex,” she said.

At 5-foot-3, she said her start “is not the best” because “everyone’s way taller than me.”

Opponents have the length advantage to begin races, yet she has trained to have the advantage in the final lap. “I worked on my endurance to be able to continue my speed at the end,” she said.

In Sunday’s meet, a loss to Central Connecticut State, she scored for the team by finishing fourth in the 200 breaststroke and in the 200 freestyle. She was part of the 400 medley relay that scored by placing third.