‘Eyes and ears on court’: Diné libero signs with U of A with coach’s blessing 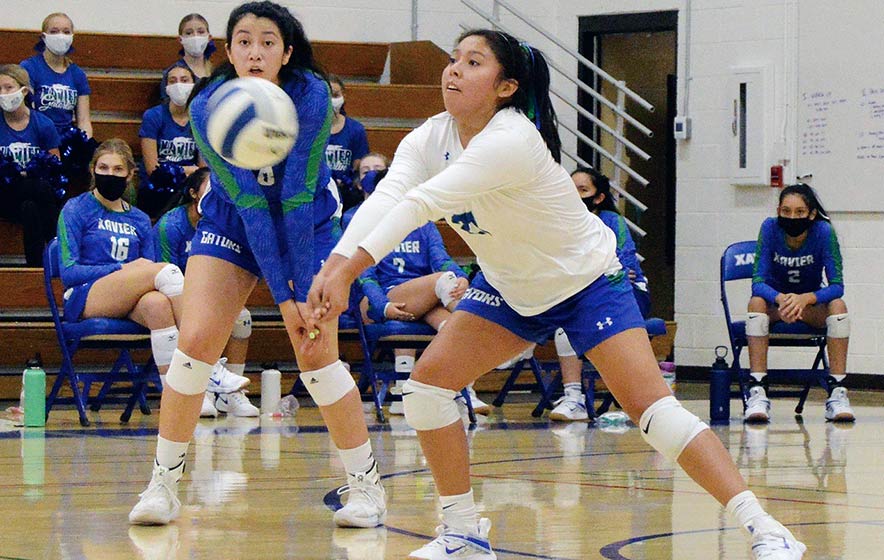 Special to the Times | Candace Begody
Kaori Robertson, libero and defensive specialist for the Xavier Preparatory, positions herself for a pass during a 6A matchup against Hamilton High on Oct. 1 in Downtown Phoenix.

By this time next year, Kaori Robertson will be sporting a Wildcat jersey as she has verbally committed to join the University of Arizona’s volleyball team come 2021 as a libero and defensive specialist.

Robertson, a senior at Xavier Preparatory School near Downtown Phoenix and the only Diné on the team, is among an impressive group of 6A volleyball players across the state who have already committed to play for Division I programs.

“A lot of the girls I play with and against have already committed to schools that play against U of A,” Robertson said.

From rival schools within Xavier Prep’s conference like Hamilton High, some have been recruited to the University of Southern California, Grand Canyon University, and Alabama. From Perry High, others will sign with Brigham Young University and Fresno State.

Asked what it will be like playing against her friends at the collegiate level, Robertson jokingly said, “We will probably hug each other but then tell each other, ‘You’re doing down.’”

That is still months away and for now Robertson is setting her sights on enjoying the last season of her high school career. She will continue her season as team captain, libero and defensive specialist.

“The goal is always to win a state championship, but really it’s just to have fun,” she said of goals for the season. “It is my last year and I just want to continue to work hard.”

Amidst the COVID-19 pandemic, Robertson said students and athletes did not know whether there would even be a season at the beginning of August.

The team was allowed to have open gym with facilities being limited to 10 people at a time. However, when they received the go-ahead from school officials, all returning varsity players were allowed to begin practice.

During a recent game against Hamilton High, players were cleaning balls between points, keeping track of those that had been disinfected, and constantly sanitizing everyone’s hands.

As for fans, each player was allowed to bring two fans, bleachers were disinfected, touchless hand sanitizing stations were provided, and all were required to social distance from each other and the players.

Of being recruited by UA, Xavier Prep’s head coach LaMar-Renee Bryant said, “I am beyond happy for her as her coach but more as a mentor. I tell my girls that volleyball is a very small window in your life, and you have to put yourself in the best situation to start a career.”

Robertson has expressed an interest in becoming a nurse.

“I am glad that volleyball is going to give her the opportunity to pursue an excellent career,” Bryant said. “Being a nurse and libero are very similar – they are always there to support others and provide assistance to others, but it is also a thankless job. But she is OK with that – that is just who she is.”

Bryant recalled the first year she saw Robertson on the court.

“In her first year, she made her presence known,” Bryant said. “It is an important role because she is in charge of the first contact. She has the commitment to be great, she pays attention to details, and she always wants to get better, and that is a coach’s dream.”

Asked how Robertson would fare at the Division I level, Bryant said time at Xavier will serve Robertson well.

“We play against the best that 6A offers and they are the toughest teams in the area,” Bryant said. “To be the best, you have to beat the best, and she has been playing and has seen volleyball at the highest level so she will be ready.”

Xavier Prep plays many of the largest schools in the state competing in the 6A Premier conference, which features teams like Perry, Hamilton, Chandler and Basha. So far, the team is 4-2.

Robertson has excelled in her position as a defensive specialist.

“As a defender in volleyball … most plays start with her,” Bryant said. “She provides the path for us to start our offense. She has to see the play before it happens, she’s the eyes and ears on court … and she is the one always digging and running across the court.”

Added Bryant, “To be a libero, you have to be fearless and the role is a thankless job. You have to take pride in your work, and when a hitter gets big swing, you have to be OK with not having a bright light on you, but you also have to know that you were the one who started it all.”

Robertson will follow her parent’s footsteps to Tucson, both of whom have earned their bachelor’s degrees from the UA. Her father Jonathan Robertson, originally from Window Rock, and Jolene Robertson, from Hard Rock, Arizona, earned their architecture and engineering degrees, respectively. Both are also 1990 graduates of Window Rock High.

“Kaori has been a pretty competitive person from the get-go,” said Jonathan Robertson. “She’s been driven to play with the best and to be the best. She gets up at 5 a.m. to go to her workouts with the trainers and she has put herself into the mix of elite volleyball players.

“She will do great,” added Jonathan. “She’s got all the skills necessary and I think she’ll only get better and better. She can take over a game if it comes down to that. Part of her nature is that as the game gets closer and more competitive, she rises to the occasion.”

The young Robertson credits Terry Spann, head coach for the club volleyball team Arizona Storm, not only for her development but also for her recruitment to UA.

“Kaori came to our organization because she wanted to play at a higher level and wanted to be put in a more competitive environment,” said Spann. “When she came over, she was surrounded by some of the best liberos. She was up to the challenge, she was committed to hard work, and dedicated to the tough practices and to the grueling side of volleyball that people don’t know exists.”

Spann said talking up Robertson to UA coaches was not hard at all.

“I knew it was a dream of hers to go to U of A,” she said. “Any kid that comes from our program is very coachable and U of A coaches know that. If you ask her to do something, she will do it.”

Spann said many players struggle to transition to the D1 level, but she does not anticipate that will be the case for Robertson.

“Arizona knows that when they get our kids, they get the transition, they respect the process, they know it’s not going to be easy and they understand that once they’ve committed, it only gets tougher,” she said. “And this is a kid that has dreamed about going to U of A. It is in her DNA and I know she will only continue to get better.”

Students at Xavier Prep are required to serve the community and Robertson chose to serve her beloved Navajo Nation during the pandemic by delivering and installing touchless water stations throughout Navajo.

After her parents made a stop at a Navajo grocery store, Robertson was saddened to find that touchless hand-washing stations were a luxury that Navajo communities do not have.

Robertson started a Go Fund Me page, had two drives, and received enough support to buy over 20 touchless hand-washing stations that were donated to businesses across Navajo.

Added Spann, “She has volunteered long hours to help the Navajo people and is just a selfless kid. This is the kind of kid you root for.

“She is involved in her community and I told U of A coaches, ‘You will gain so many fans by bringing this kid on to your team and you will get positive representation in your program,’” she said. “Not only does she deserve this but she has earned it.’”