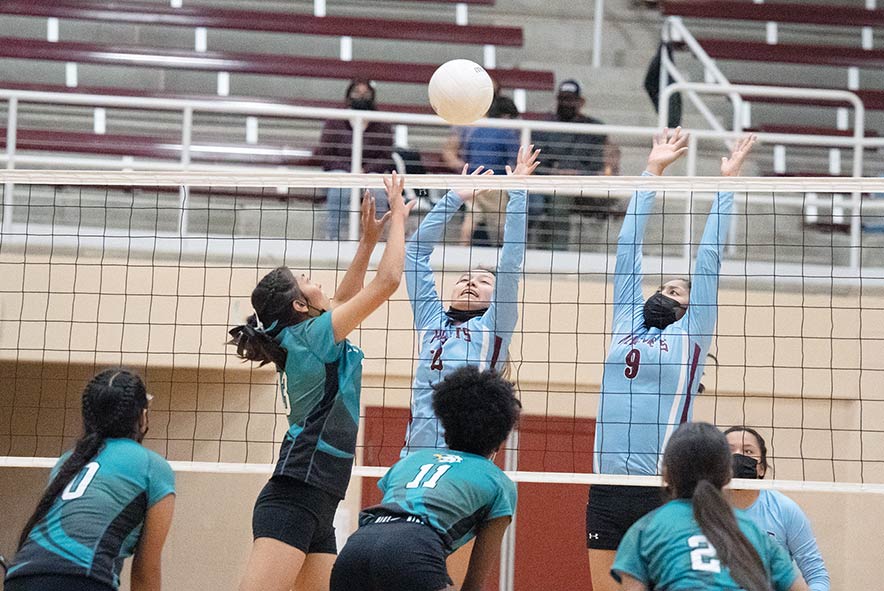 File photo | Donovan Quintero
Ganado Lady Hornet players Lauren Burns (2) and Kiyarra Curtis (9) go up for a block against the Piñon Lady Eagles during last year’s 2A North Region tournament. Ganado enters the 2022 season with a new head coach with Alyssa Dalgai being promoted to the post.

Following the departure of longtime volleyball coach Jerome Burns, the Ganado Unified School District hired within by promoting Alyssa Dalgai to the post.

Dalgai spent six seasons as an assistant to coach Burns and feels that continuity will bode well with her players.

“I know the girls,” she said. “I’ve coached the senior group since they were in middle school. I started with them since they were sixth graders and I moved up along the way.”

With Burns resigning his position, Dalgai felt the need to step up and take over the program.

Last season, Ganado played as a 2A school and following the two-year realignment block instituted by the Arizona Interscholastic Association they moved up a class, competing in the 3A North.

“We saw a lot of competition at the 2A level,” Dalgai said. “It’s kind of the same as 3A. You know, down in the Valley the private schools had some very tough teams with some really good players.”

As one of the top 2A teams in the area, the Hornets made the playoffs and went 1-1, losing to Chandler Prep.

And with six returnees, Dalgai said they have no intention of slowing down.

Dalgai said she has an experienced group and they are looking to hold their own in the tough 3A North.

“I feel like we’re going to do well; the girls have worked together for all these years,” she said. “I have a few club players, who play year round. I feel like they know what they’re getting into, and we’re preparing for that.

“We’re just exciting to be going back to 3A,” she added. “We’re looking forward to playing our other rivals like Monument Valley and Tuba City. We didn’t get to play with them last year.”

“I feel like we’re going into this season with a ton of confidence,” Dalgai said. “These girls are working hard and we’ve done a lot of drills to get us ready for what’s coming.”

The Ganado coach said her seniors are versatile players and she’s expecting them to lead the team.

In addition to those aforementioned players, Dalgai was also excited with the progress of sophomore middle hitter Jaylen Hildreth.

“She’s done a lot of growth and she’s continuing to work on her fundamentals,” she said.

The Hornets will take part in three tournaments this year starting with the Longhorn Invitational next week in Payson. They will also take part of the 2nd Annual Window Rock Volleyball Tournament Sept. 9 to 10, and the Epic Tourneys Volleyball Invite, which is hosted by Chandler Prep Academy, Sept. 23-24.