Gold bracket winners: Laguna-Acoma’s size too much for Reserve 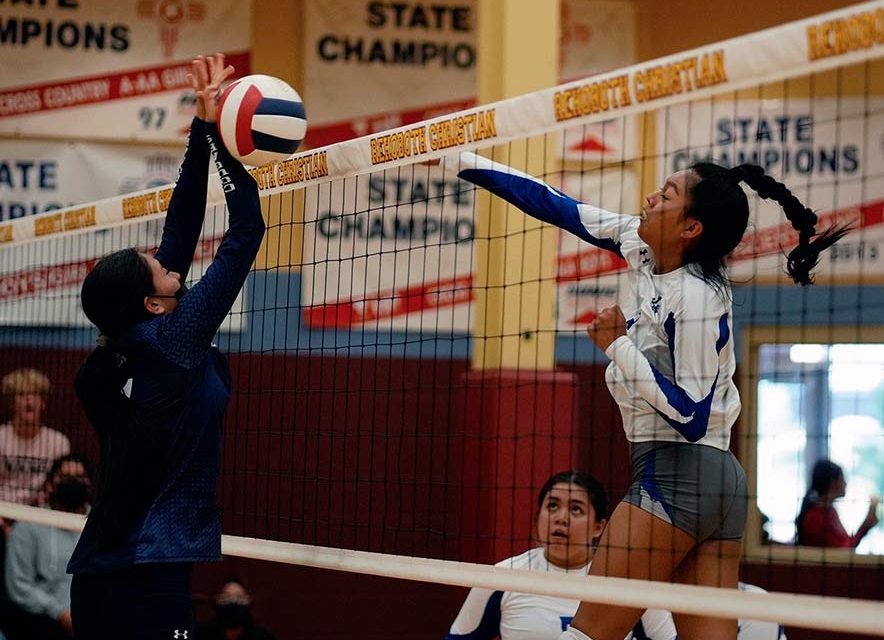 The height advantage that Laguna-Acoma possesses led to a dominating finish at the Rehoboth Christian volleyball tournament.

The Lady Hawks boast five players over 5-feet, 9-inch and their superior size overwhelmed the Reserve Mountaineers in the title game of the gold bracket on Saturday.

“They were working very well together,” Laguna-Acoma coach Esther Lorenzo said of her club. “Everyone was passing, and the setting and hitting was there. They were all in tune with each other and that’s all I can ask of them.”

The Hawks finished the contest with a 33-to-7 edge in kills. The Lorenzo-coached team added 14 aces and two blocks for the easy three-set victory.

“I honestly didn’t think I was gonna get MVP,” Gedmen said. “I thought I could do better and I knew that I could have done better. I’m thankful for everyone who believed in me and I’m thankful that we made it this far.”

Reserve coach Micheon Shellhorn said this was the first time her club has ever played in a championship game, and she believes the spotlight may have got to them.

“We have a really young team and we’ve been building for the last few years,” she said. “We came in really excited, but we had a little bit of fear and we tried really hard to work through it.

“We were just thankful to be here,” she added. “We’re happy. We’re excited and we love the game so we’re looking forward for more success to come after tonight’s loss.”

Shellhorn said playing the defending 2A state champs in the title game was a great opportunity for her club to experience.

“I told the girls that we won’t see a brick wall like Laguna does, so it was great for us to play them,” she said.

The title on Saturday was LA’s second of the season as they captured the Santa Fe Indian School crown earlier this month.

They now have their eyes set on winning the District 1-2A crown and then the state playoffs.

“We’re looking forward to the state, but that still quite a way,” Gedmen said. “We’re taking it one game at a time; staying humble is the most important thing to us. We don’t want to get too big-headed because that can bring us down.”

Senior setter Bethany Mariano, who also made the all-tournament team, said there is pressure on them to repeat as state champs.

“They’re looking at us to win state again,” she said of the community.

“Honestly, it would mean everything,” Gedmen chimed in. “Last year was the first state title in LA’s history for volleyball. Being back-to-backs state champs would probably mean more to us because back-to-back doesn’t happen all the time.”

And although their size can be intimidating, the thing that sets them apart is the balance attack they have.

“I feel like they’re just as strong as last year if not stronger,” Lorenzo said, while adding that her club likes to play fast.

“The girls really enjoy that adrenaline of going fast,” she said. “When we play in some of these slow games it kind of gets them out of their groove. But I’ve told them that we have to play at our speed and continue to do what we do.”

“It’s kind of hard playing teams that play slower,” Gedmen added. “It throws us off on offense, so sometimes our passes aren’t there and we get a little hectic. That is when teams start to score off of our mistakes.”

Day, who returned to the lineup after being sidelined with an injury, is still assessing her game.

“Personally, I feel like I can do better,” the 6-1 middle hitter said. “I’m coming back from an injury, so I’m slowly easing back into the game.”

Senior outside hitter Hailey Kelsey is also coming back from an injury and in the title game she finished with eight kills and four aces.

For the most part, the LA squad played at an elite level during the three-day, 16-team Rehoboth tournament but when they did struggle Kelsey said they made the adjustments.

“When there’s something wrong we’ll fix it,” she said, while adding that the team’s energy and attitude plays a role in how they play.

“We like to play at a certain level,” she said, “so that’s important because when that comes down it can bring the team down.”

More than anything, Kelsey said they would like to bring home another state title for their community as they are gaining followers.

And like any defending state champs, Lorenzo said they’re going to get everyone’s best shot.

“I think any state champions will have that target on their backs,” she said. “The girls are aware of it, but they know what they need to do to push themselves to go that far again.”