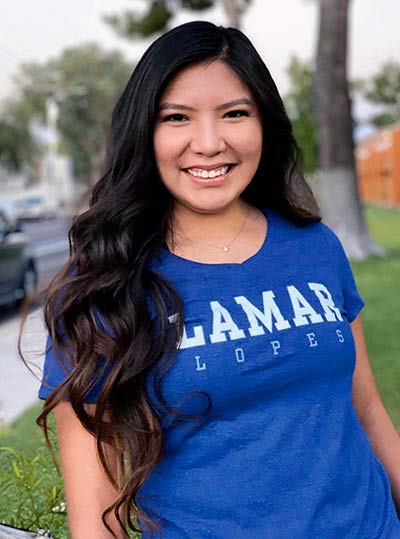 She had signed with the Lamar Community College women’s volleyball program and had planned on attending the two-year college in Colorado later this fall.

But after consulting with the LCC coach, White-David realized that she had enough credits to earn her high school diploma in December 2019.

With that she got an early jump to collegiate life by enrolling at the school and this past spring she participated in spring practice before the pandemic sent everyone home.

“I basically graduated high school in December so the coach offered me to come in early so that I can get ahead,” said White-David, who plans to earn an AA degree in science and psychology as she aspires to work in the medical field and perhaps enter medical school.

White-David grew up in Nenahnezad, New Mexico, and is the daughter of Gabriel David and Thelma White-David.

And while she had other offers, signing with LCC was an easy choice for White-David as the other programs weren’t as promising.

“They offered me more than what the other schools were offering,” the 5-11 outside hitter said of the partial scholarship she earned, which is almost a full-ride offer.

“They coaches were very welcoming too,” she added. “They knew what I want to do after I finish community college and the credits that I will earn will transfer easily to a four-year college of my choice.”

Signing with a college was a dream come true for White-David but to get an early start to her college endeavors, Thelma said her daughter had to work super hard to graduate high school early.

“This is all her doing and she had to work hard for it,” her mom said. “We just supported her on her decision to graduate early and for this to happen, I just don’t have the words for that.”

With her daughter set on graduating high school early, Thelma said Gabrianna made a lot of sacrifices so that she can concentrate on her studies.

“She really didn’t hang out with friends,” she said. “She was always busy with her school work and when this was happening she didn’t let anyone know that she was pursuing this.

“She was real humble about it, not wanting to brag about it,” she added. “She kept it to herself and she worked quietly on what she needed to do. She’s really dedicated and when she wants something she’ll work hard for it.”

And while she got a taste of college life, Gabrianna was heartbroken when she was sent home in the middle of spring break because of COVID-19.

“We had spring practice and that’s why I graduated so early so that I could be a part of that but the whole situation with the pandemic popped up,” she said. “I had to come home early so it didn’t really take off that well for me.”

White-David said spring practice started at the beginning of March so she put in three weeks of practice with the team.

“The coach was telling me that if I practice hard enough I could get a starting spot this coming fall,” she said.

As the first in her family to earn a collegiate athletic scholarship, Gabrianna said she sought out the undertaking at an early age.

“It’s something that I’ve been looking forward to since elementary school,” she said. “It was always my dream to play at the college level so it was a big deal for me when I signed.”

To help foster her dreams, her parents took Gabrianna to summer camps to better her skills.

“Every year she picked up something new,” Thelma said.

“During high school she was very dedicated to her volleyball,” her dad, Gabriel, said. “We put her through a lot of volleyball camps and the hard work she put in made her who she is. She deserves all the things that she is getting right now with the scholarship and going off to college.”

Both parents credited KC volleyball coach Nadia Begay-Watson for steering their daughter in the right direction.

“She helped her not just physically but mentally and spiritually,” Thelma said of the KC coach. “She helped find things on what she could improve on to get better.”

While at KC, Gabrianna played five seasons on the varsity as the Lady Broncos earned a state bid in two of those years.

And while the team missed the playoffs last season, Thelma said the biggest accomplishment her daughter received was earning the District 1-4A Player of the Year award.

“We weren’t expecting that but like my husband said she deserves what she’s earned,” she said.