Signing to play on the women’s volleyball team at Oak Hills Christian College was a lifelong dream for Ariana Lee.

The former Kirtland Central player inked her name earlier this month. Not only was she offered a scholarship in her favorite sport, Lee was also asked to join the basketball team.

“We didn’t expect that,” her mom, Carletta Lee, said of her daughter playing two sports collegiately. “We were real surprised by that.”

Ariana said she signed with the four-year college in Bemidji, Minnesota, based on its professor-to-student ratio.

“It’s a small college and, yes, it’s far away from home but I would like to go out and learn about life on my own,” she said. “Growing up I had seen myself starting out at a small college and I think that would really help me academically so that I can stay focused.” 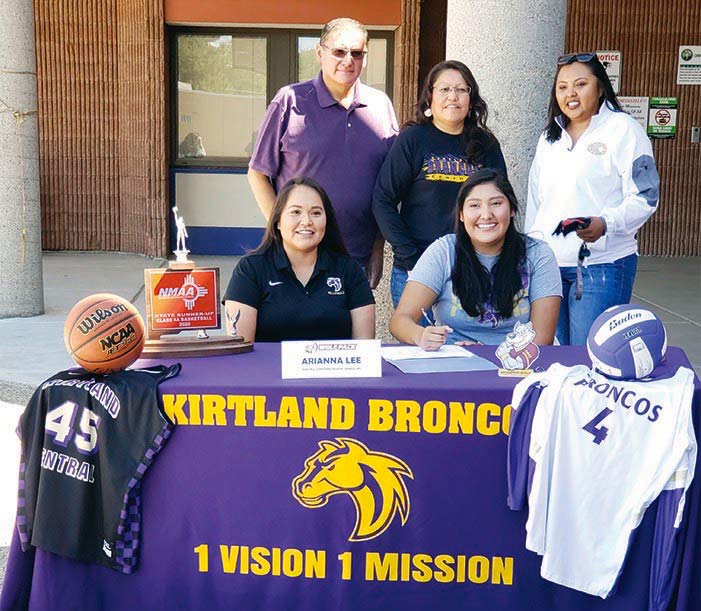 Besides Oak Hills Christian, Ariana said 11 different colleges offered her a scholarship, varying from the community college level to the Division II and III levels.

“It was mostly pretty much the whole United States,” she said, noting that her other college choice was Austin College in Sherman, Texas.

And although the private nondenominational college is a four-year school, Ariana said they were willing to help her out if she decides to transfer out.

“Even if I play only two years they’d help me branch off to another school,” the 6-1 middle hitter said.

The KC grad admitted that she had to put in the work on-and-off the court to earn those scholarships.

“Nothing came easy,” she said. “I had to work very hard to get where I’m at. I’ve been playing volleyball for eight years now and honestly, it’s all about the mindset.

“You have to encourage yourself and once you have your dreams in place you have to want it and go pursue it,” she added. “At the same time you have to have a good support system behind you. My mom, my dad and my whole family has played a big role in that.”

Ariana has three other siblings and her parents are Michael and Carletta Lee.

In addition to her family, Arianna credited her high school coaches for being very supportive in her development.

“My coaches, Nadia Begay-Watson and Darla Woody, were my volleyball coaches and Devon Manning was my basketball coach and they helped out a lot,” she said.

As the matriarch of the family, Carletta said having her daughter going off to college and playing volleyball is “very heartfelt and touching.”

“We’re excited that she’s going and we’re just here to support and encourage her,” she said. “We’re trying to help her follow her dreams.

“I’m just happy for her,” she added. “I can’t wait to see what she does with this, especially coming from a small community here in Shiprock.”

Carletta said very few people get this opportunity and now that her daughter is off to college to play volleyball and basketball she has to accept the part of being a role model.

“I told her people are going to look up to her,” she said. “She needs to do her best and show that anyone can do this.”

Admittedly, Carletta said she’s going to be sad when her daughter leaves the nest but she knows it’s necessary.

“It’s going to be hard to let her go but we know this will be a learning experience for her,” she said. “She’s going to gain some perspective on life with her going to college.”

Carletta said her daughter has always talked about wanting to play collegiately and as a parent she helped nurture that dream.

“All we can do is love them, encourage them and just believe in them,” she said. “We’re Christians and we believe that everything is in God’s hands, our Creator.”

Carletta said it was hard for her daughter to make her final decision as her grandparents wanted her to stay close to come.

“They really wanted her to stay locally but her heart was telling her to go out of state,” she said. “Even though she’s going to be 2,000 miles away she knows we’re going to be a phone call away.”