The Page volleyball team is in a good place right now. 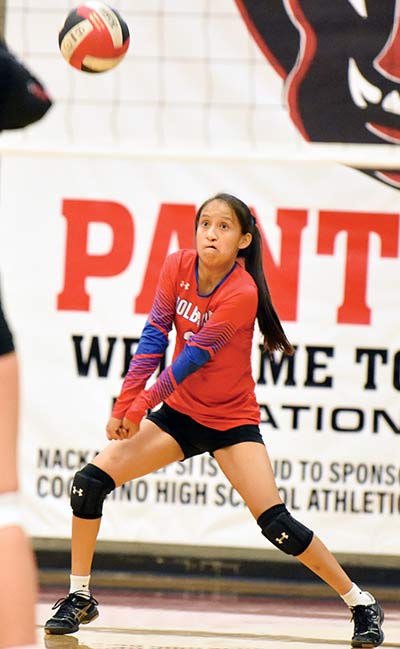 Holbrook Lady Roadrunner Korri Lee sets up to bump the ball to her teammates on Friday during the Coconino Invitational.

Page finished the bracket portion of the tournament with 3-0 record. In the opening round they bested Apache Junction before closing out the two-day tournament by beating Holbrook twice in the double elimination tournament.

“I think we did really well,” Page co-head coach Danielle Chee said. “We worked on our communication and everything kind of fell into place as we got closer to the end of the tournament.”

“We already knew that our girls were able to hang with some of these 4A teams at the tournament,” said Chee, who shares the head coach duties with Misty Smith. “But when we played Flag High our girls were surprised. I think it opened their eyes knowing that they can do this. I think playing them that close was real encouraging and that helped throughout the tournament in the silver.”

Based on what they did, Chee said the sky’s the limit for this year’s team that returns nine players off last year’s state-bound team.

The Sand Devils finished last season with a 13-16 record, which included an appearance in the title game of the 3A North Region tournament.

With a core of returning players, Chee said the team chemistry has already been established but as the season progresses they need to work out some kinks.

“We still need work with our communication,” she said. “Right now we’re kind of struggling with that.”

“We didn’t play as well as we would have liked but in the last two sets we were communicating,” Chee said of their match with the gold bracket champions. “We were talking and the girls were feeding off each other. We just got into a rhythm.”

Chee said they have multiple hitters on the team and they are quite versatile.