Navajo flutist plays in town where treaty turned up 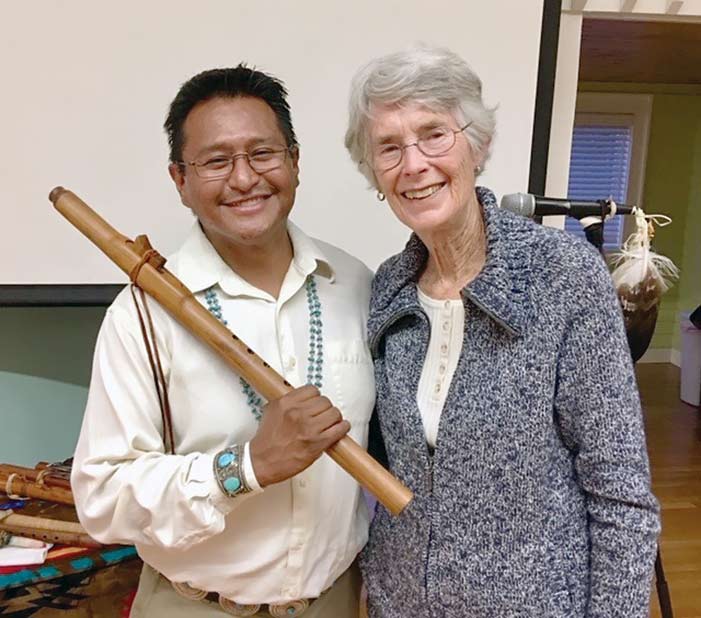 Courtesy photo
Navajo flutist Jonah Littlesunday met Kitty Weaver, who recently donated her original copy of the Treaty of 1868 to the Navajo Nation Museum, last month while playing a concert in Manchester-by-the-Sea, Mass.

Native flutist Jonah Littlesunday, originally from Grey Mountain, Arizona, played a concert in Manchester last month, organized by local businesswoman Karen Pischke, who had heard him perform in Arizona. Pischke said she was unaware of Manchester’s Navajo connection, she just liked Littlesunday’s music and wanted to get him more exposure by setting up a national tour.

But among the Manchester residents who saw an advertisement for the concert was Kitty Weaver, the great-grandniece of one of the treaty’s drafters, Col. Samuel F. Tappan, and the woman who donated Tappan’s original copy of the treaty to the Navajo Nation Museum this summer. Excited to meet a Navajo in her hometown, Weaver contacted Pischke, who set up a meeting between the two before Littlesunday’s concert on Aug. 15. Littlesunday “offered a special song and blessing in her honor,” said Pischke.

In turn, Weaver invited him to her home, the old Tappan house, where the treaty had resided for 151 years before being donated to the museum. “It was serendipity for the first Navajo to visit the area … to happen to play in my Manchester, the town where the Navajo treaty was hiding for 150 years,” Weaver wrote in an email, adding that Littlesunday brought his two young sons, who had never seen the ocean.

“My wife, Pauline and I were very excited and our hearts were warmed in meeting Kitty,” Littlesunday wrote in an email to the Times. “She is very kind, insightful and a beautiful soul. I immediately understood why she donated her copy of the treaty to our people. It is in her nature.” Littlesunday added he is very grateful to Pischke, “the woman who brought me up to New England, made all the connections and made everything possible.”

Littlesunday was in Florida this week visiting his son. He left Wednesday for Texas, where his next concert is scheduled.