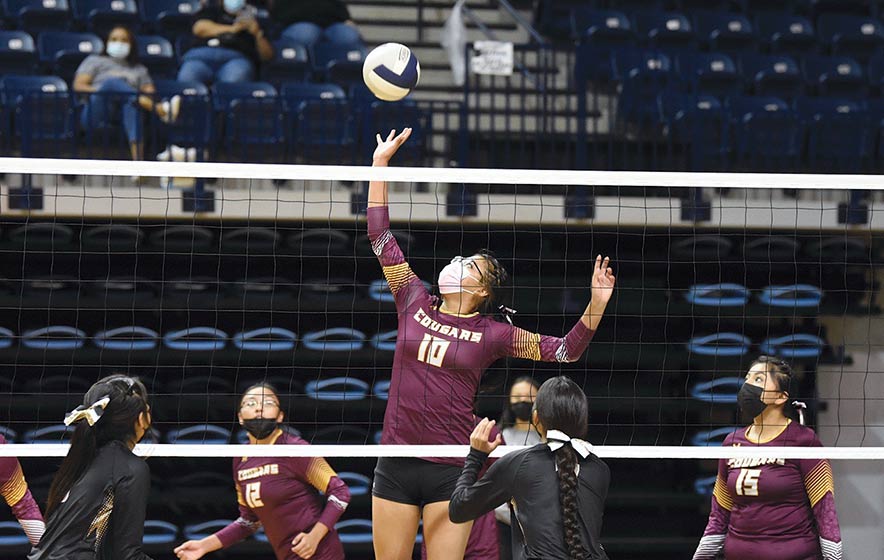 Special to the Times | Ravonelle Yazzie
Rock Point’s Arianne Begay (10) goes up to get the ball over the net to the Chinle Lady Wildcats at the 2nd Annual Window Rock Lady Scouts Volleyball tournament in Fort Defiance.

Rock Point volleyball coach Kyle Arthur isn’t making any promises about his thriving program, but there is some wishful thinking going around.

After all, the Lady Cougars captured the school’s first state title in the sport during last season’s 31-1 campaign.

“I’m excited for the girls that are returning,” Arthur said. “We’re going to do the best we can with what we have, but this is a brand-new season.”

The Cougars graduated five seniors off last year’s squad and they return four starters, so Arthur is being cautious about what’s to come this season.

And while he would like to add to the school’s trophy case, Arthur said they’re going to take the season one game at a time.

“We met with the parents and the community to let them know that we’re a new team and this is a new season,” he said. “But the expectations are sky high right now.

“The community support is through the roof,” he said, “so they expect us to win another state title.”

The second-year Rock Point coach wants his team to shy away from that rationale and concentrate on what they need to do to get better.

“I’ve told the girls that we have to trust the process,” he said. “We have veterans on the team and they know what a state championship feels like, and they know the atmosphere, so they understood those roles during that game.

“This season they have new roles, so now they have to get comfortable with those new roles,” he added. “But they’re getting used to those new roles with every game that we play. If we trust the process, we’re going to be ready at the end of the season.”

All those aforementioned players played different roles last season with Begay and Woody moving from outside to middle hitters while Yazzie, the team’s setter, and outside hitter Chee were defensive specialists last season.

“We lost a lot of seniors, so I feel like we’re starting from the bottom again,” Begay said. “There is some high expectations on us, and some of it is coming from our community and parents.

They want us to win it again, but we’re a different team.

“We’re slowly building that chemistry and we’re getting to know each other,” she added. “We’re gaining more experience and we’re learning how to play together.

“It’s going to take a lot of communication, and working together as a team to win another one,” Woody chimed in. “We need to find that combination like we did last year.”

Of all the team members, Begay said Yazzie has accepted the huge task of trying to lead the team as the setter. The Rock Point MH said her teammate’s ball handling skills are getting better.

“She took a huge step for us,” Begay said of Yazzie. “It’s not an easy job, and she’s learning.”

With it being her senior season, Begay said it would be a huge accomplishment to defend their state crown.

“I want to try and win it for me and my coach,” she said. “We both moved up to Rock Point (High) the same time. He’s been my coach every since I came to Rock Point.

“It would be fun to win state again with him as a coach for my last year,” she said.

At the recent Window Rock Lady Scout tournament, the Cougars took home the third-place trophy with a 25-22 and 25-20 win over Chinle.

In the semifinals, the Arthur-coached team dropped a 25-24 and 25-18 decision to the host team.

“When we saw the bracket we knew Window Rock was going to be our biggest contender and we tried to mentally prepare for that game,” Arthur said. “It was a close match in that first set and Window Rock found their momentum and they kept it throughout the second set.”

Rock Point then beat Ganado in straight sets in the double-elimination bracket for the right to take on Chinle.

“Chinle played a great game with Winslow,” Arthur said. “I think Chinle really built that energy and they carried over that momentum over to our game.

“The second time around Chinle was playing a lot tougher than they did when we played them at their home game,” he added.