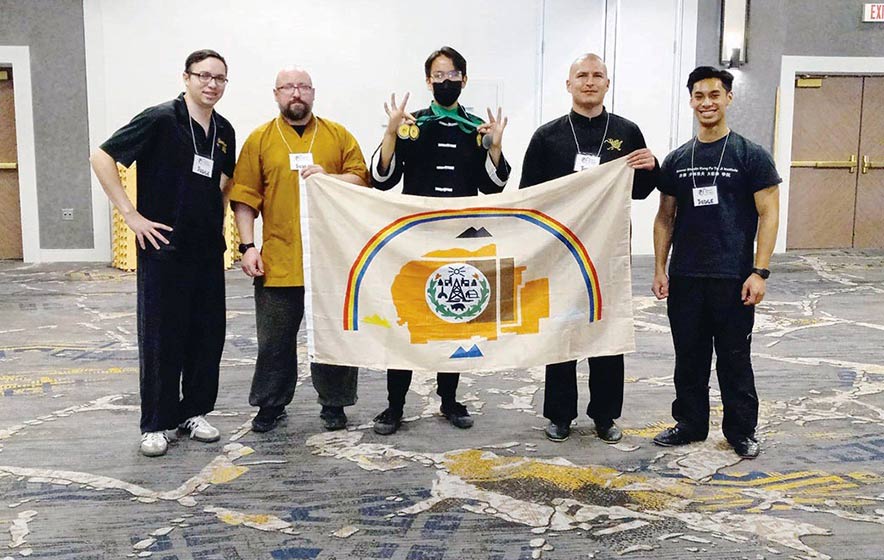 Courtesy Photo | Ronzo Chee
Rolonzo Chee celebrates after winning gold at his first international Kung Fu tournament. He stands alongside the judges who have never seen the Navajo Nation flag before.

In mid-July, the international Chinese Martial Arts Championships took place in Orlando, Florida, and Kung Fu students from around the world came to compete.

Among this year’s champions is Rolonzo Chee, originally from Rock Point, Arizona.

Chee started his journey in martial arts about two years ago and since then has competed in tournaments in Denver, Las Vegas, Albuquerque and now Orlando.

“I felt really proud of myself,” Chee said. “It was really cool to see all the types of people from around the world, and competing against people from California or from overseas. People who would come to that type of competition are the best of the best.”

Being 17 years old, Chee competed in the teen category, contending in the hands, swords and sparing events, all under the traditional section.

He came first in all three events, earning him the gold for his age.

Chee was intimidated, being in a tournament among hundreds of other challengers from different nations and cultures. As far as he knew, he was the only Navajo participant.

He met contenders from Asia, young martial artists who’ve been training since they were children while he only had a few years under his belt. But he’s gotten used to being the underdog.

“Usually when I go to tournaments, there’s like, no Natives at all,” Chee said.

“There are whites, Blacks,” he said. “Mostly Chinese and some Mexicans, then I’ll be the only Native.

It was a tough competition competing against the best in the world, but with the support of his family, Chee pulled through.

“Every competition my dad would talk to me and help motivate me,” Chee said. “Then before I go to perform my forms or do sparring, I’ll tell myself, ‘I’ve no reason to be scared, I know what I’m doing. I can do it.’”

Chee has been practicing in Kung Fu and Japanese karate. It was challenging at first learning two different martial arts, but he became familiar with the two different systems and learned much.

Chee first got into martial arts as a kid when his dad, Ronzo Chee, showed him some boxing techniques and a little martial arts.

Ronzo left the rez in 1988 and went to college in Salt Lake City. It was there he got into boxing as a coping method to help him adapt to the world outside the Navajo Nation.

He won the Golden Gloves in ’89-’90 for the 132-weight division before moving on and finding a martial arts judo not far from the boxing gym.

He took a few lessons there, but he had started a family in Grand Junction, Colorado, and became too preoccupied to continue taking lessons.

However, the common interest between father and son helped Rolonzo make his decision to try martial arts.

Ronzo gave his son tips he had learned when he trained to be a boxing champion.

Chee didn’t start taking Kung Fu lessons until his freshman year in high school. His interests had grown since then.

He said it is interesting how the different martials arts work, how they’re different in style and techniques and how they each teach you a new aspect of life.

One of his favorite things about competing is that after the tournament he gets to talk to the judges, who are masters, and they’ll talk about his performance and give him advice.

Martial arts also came in handy helping Chee to defend himself. He’s even planning to start a martial arts club at his school, Central High, and teach his fellow students basic self-defense.

Chee keeps himself busy, going to the gym each evening, training some more at night and then traveling over the weekend to tournaments.

In between, he also plays basketball, throws the discus, all the while keeping up a positive fun attitude.

Ronzo is proud of how far his son has come and all that martial arts had taught him.

“He learned a lot in a positive way,” Ronzo said. “He’s been doing pretty good with everything and he’s always been a no-trouble kid. He just always positive and a strong kid and I’m so proud of him.”

He was very happy for his son, crying tears of joy when Rolonzo was named a world champion and being surprised to hear other people – strangers – cheering for him as well.

Rolonzo is preparing for his first Japanese Karate tournament in Denver in a few weeks. He plans to continue competing all the way up until he graduates next year.

He plans to go to college for engineering, but is already making plans to help his Kung Fu instructor train new students and hopefully he’ll get the chance to teach a Native kid one day.

“There’s one thing I want to say to the Native kids out there,” Chee said. “Stay positive and always stand up for yourself, and no matter what it is, always achieve on whatever you want and work harder to get the dream you want.”