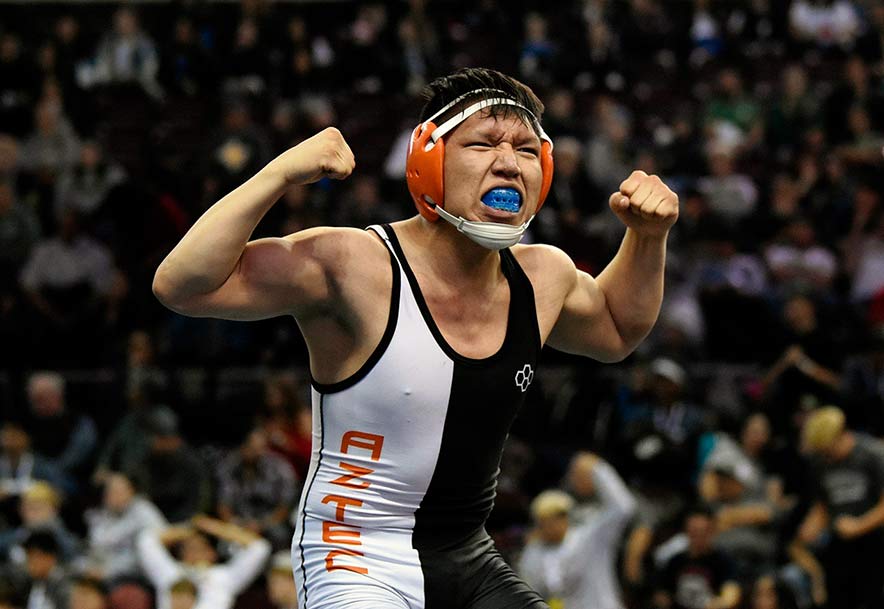 File photo
Aztec junior Malcolm Altisi captured gold in the 160-pound weight class at the New Mexico Class 4A state wrestling meet on Feb. 22. Altisi was one of 15 area grapplers to be named the Times’ Wrestler of the Year.

The 2019-20 wrestling season proved to a phenomenal year for our area grapplers.

Between the three states in our coverage area, 22 state titles were won including 19 individual boys’ and girls’ crowns.

With those numbers the Navajo Times had to take some time to consider our wrestlers of the year for light-, middle- and heavy-weight divisions. 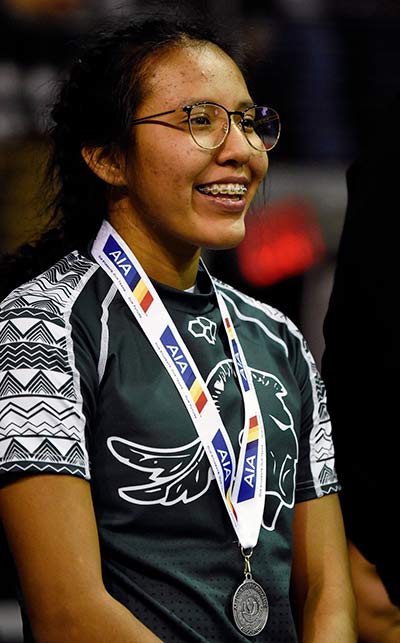 Tuba City wrestler Brooke Williams placed fourth at the Arizona girls state wrestling meet in the 125-pound weight class, which earned her the Times’ Wrestler of the Year award in the lightweight division.

At the New Mexico Class 4A state wrestling tournament, Valdez capped an impressive year as he finished the season at 39-0 after capturing the 106 state title, which included a fall in the championship match against Española Valley wrestler Deven Atencio.

Kinlicheenie also captured gold in the 106 class at the Arizona Division IV state-wrestling meet as he finished the year with a 42-3 overall record.

In his finale, the Joseph City sophomore recovered from a four-point deficit and forced sudden death overtime against Morenci’s Soloman Lucero.

In the extra session, the Diné wrestler came up with a takedown to score a 12-10 come-from-behind win.

“He doesn’t have the motor that I have,” Kinlicheenie said of his opponent at the conclusion of his state title run. “I knew that he was getting tired and I knew that he didn’t want to go to sudden death because I was about to get him pinned. He was going to give up before I did.”

In the middleweight division, Aztec’s Malcolm Altisi, Farmington’s Cirrail Allison and Monument Valley’s Tanner Tsinigine were recognized as wrestlers of the year.

Tsinigine, who captured the Utah 1A-2A 160-pound state title, said he was honored to be recognized for the second straight year.

“I’m really grateful that the hard work and everything that I put into this sport is paying off,” said Tsinigine, who finished the season at 33-1 overall. “I’m just happy that I got it again so this is a real good feeling.”

Altisi claimed the New Mexico Class 4A state title at 160 as the No. 3 seed in the 16-man bracket. After posting a pair of pins at the start of the state finals, the Aztec junior knocked second seed Jonathan Naef of Grants and fourth seed Sebastian Martin of Albuquerque Academy in the finals by a 3-2 margin.

“I told myself that I’m going to win this match and keep at my pace, I’m not going at my opponent’s pace,” Altisi said to the Navajo Times. “It feels really good to win.”

In the Class 5A 170-pound bracket, Allison completed the season with a lofty 44-0 record. In the state finale, the Farmington senior posted a 4-2 decision over Rio Rancho’s Xavier Salazar.

Begay posted a 53-3 record this past season, which includes a second-place finish at this year’s Arizona Division I state wrestling tournament at 195 pounds. In addition to the state tournament, the Mesa Mountain View senior placed fourth at a highly competitive wrestling tournament in Huntington Beach, California.

Like Tsinigine, this was Begay’s second time he was recognized as wrestler of the year, having won the award last season while at Page High.

At the New Mexico state wrestling tournament, Small earned a pin over Carlsbad’s Trystan Rogers to claim the 5A 182-pound title. With the win, the Farmington junior finished a 50-0 record.

At the Utah 3A state championships, Kaibatony also won gold at 182 as he pinned South Sevier senior Taylor Hunt with 38 seconds left in the third period.

“It’s amazing,” said Kaibatony, who started wrestling competitively one year ago after taking at least a 14-year hiatus from the sport. 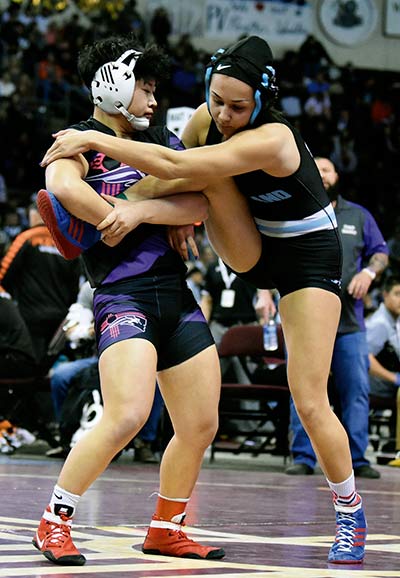 Miyamura’s Yele Aycock captured the 132-pound state title at the New Mexico girls state wrestling tournament. Aycock was picked as the wrestler of the year.

After losing her first-round match, Alcott won three consecutive matches and reached the third place match in her bracket, losing her final match to Yessemoa Martinez of Cesar Chavez High School by a 6-1 decision.

The MV sophomore said making the podium will serve as a stepping stone for the next two seasons.

“I want to try and place higher,” the MV wrestler said as she finished the season with a 19-6 overall record.

Like Alcott, Williams lost her third-place match as she came up short to Basha sophomore Trinity Howard by a fall.

“It was hard but it was all worth it at the end,” Williams said. “I was able to place fourth, which is actually pretty good.”

“My drive is a strength and a weakness. Sometimes I get nervous; it gets into my head about things, big matches, stuff like that. I think my drive is due to good staff as well, good wrestling partners, things like that,” Aycock told the Navajo Times.

At 160, Altisi managed to topple Miyamura’s Nancy Rodriguez for the state title after falling short to the Patriot senior the previous two seasons when girls’ wrestling was recognized as an exhibition at state.

Martinez was also a first-time state champion after the Grants sophomore took the 182 title. Martinez, who picked up wrestling two years ago, credited the extra time she spent in the training room to get better.

“This season I was actually pretty motivated to do a lot more better,” she said. “I wanted to become a better wrestler, a coachable wrestler, listen to my coach, taking in every advice they gave me.”

As a first-time wrestler, Page’s Monique Parrish surprised herself in her debut at the Arizona girls state-wrestling tournament with a third-place finish at 185.

“I didn’t expect this at all because everybody on the team has a sibling that wrestled and no one in my family has wrestled before,” said Parrish, who finished the season with a 24-4 record. “I’m just real happy and my goal this year was just to have fun.”

“It feels amazing, like all my hard work and determination paid off,” Dodge said of her state title win.

With that, KC coach John Sandoval said Dodge made history by being the first female wrestler at the school to win state.

“She was a basketball player and she ended up getting cut from the basketball team. She came out to wrestling and now she’s a state champ,” he said.

With a team score of 246 points the Aztec wrestling team won its third consecutive state title under the tutelage of Monte Maxwell. With that, Maxwell was named coached of the year along with Monument Valley’s Clyde McBride and Miyamura’s girls coach Nate Seller. 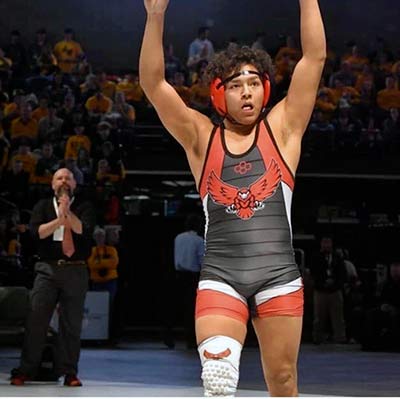 In the heavyweight category North Sanpete’s Jaden Kaibatony was named the Times’ Wrestler of the Year for the 2019-20 season. In mid-February Kaibatony won the Utah 3A state title at 182 pounds.

“Our season itself is pretty much the same every year. We always try to wrestle out of state, try to find competition to beat us, to make us better wrestlers,” Maxwell said. “Coaches I have on staff, they work, they care, they push; we just expect the best out of the kids.”

On the girls’ side, the Lady Patriots won the state title with 88 points. Sellers said it was a historic moment for the program to bring home the state title.

“It’s surreal. We’ve been saying we’ve had very successful girls in this area for a long time and it’s finally sanctioned, and they’re able to get recognition,” he said. “It’s icing on the cake, because the representative of our school, Hiroshi Miyamura, is a statue in U.S. history, in his accomplishments in the military. To bring home the school’s very first state title and the girls’ first sanctioned title is amazing.”

Thanks to a top finish at the sectional tournament, the Mustangs qualified 13 wrestlers for the Arizona Division IV state wrestling meet this past season with McBride at the helm. At state, MV finished with a team score of 54.5 points, which was the highest among the area schools.

For a list of all-stars in wrestling pick up the Navajo Times.