There’s a distance of 120 miles between Yah-ta-hey and To’hajiilee. The closest telecom companies to To’hajiilee are in Albuquerque, 30 miles to the east. But their business models apparently didn’t include serving a rural community of around 3,000 people and 500 homes.

“Without (Sacred Wind), we were being left behind, even though Albuquerque is just over the hill,” said To’hajiilee Chapter President Mark Begay. Sacred Wind connected the school, health clinic, chapter house and hundreds of homes using a mix of fiberoptic cables, copper cables and a microwave system. But there were challenges. 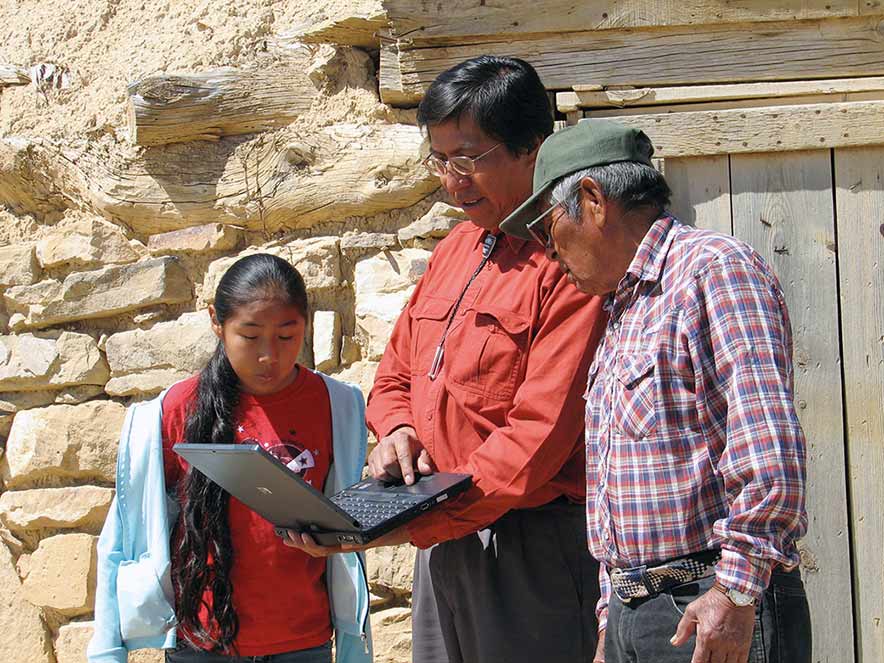 Special to the Times | Colleen Keane
During his term as New Mexico state senator, in 2006 Leonard Tsosie tells a To’hajiilee student and an elder about the resources available over the internet.

John Badal, Sacred Wind’s chief executive, explained that the microwave connection limited the internet capacity. “Right now it is at a slow speed (in some places),” said Jordan Etcitty, chapter secretary/treasurer. “It’s really hard to get information to all of the community, especially those living in the north canyons,” said Chapter Vice President Jacqueline Platero.

The low speed and need for connectivity in more remote areas spurred Sacred Wind to look for solutions, which they found in 2015. That’s when Sacred Wind received a loan of $13.8 million from the U.S. Department of Agriculture to upgrade To’hajiilee’s internet system with fiberoptics.

“We’ve been working for more than five years to get our fiberoptic line extended,” said Badal. ‘Once we finish our network to (To’hajiilee), there will be direct fiber-to-fiber without the microwave slowing it down.” “We went over mountains (to make it happen),” he explained.

The dedicated fiber route starts at Sacred Winds’ headquarters in Yah-Ta-Hey, then moves to towers at Gibson Peak, Mount Powell (east of Pinedale), Haystack (at Baca-Prewitt) and Mt. Taylor and ends up at towers east and west of To’hajiilee. Along the way, the company secured several rights-of-way through federal lands.

“Now, the work is about three-quarters of the way done,” said Begay. “We are real, real happy. We will have good things coming.” “We have students who are out of school, they could be utilizing the internet,” said community member Leeannie Willie.

Added Willie, “(Let’s get) adult education for elderly, too. Something for them to look at all day long. That will be nice.”

U.S. Sen. Tom Udall, D-N.M., stated that “closing the digital divide in Indian country has never been more important than now during the COVID-19 (coronavirus) pandemic.”

In an email response to the Times two weeks ago, he stated that high-speed internet was crucial because every daily activity – work, school, tele-health, accessing social services, shopping for basic needs – is being done electronically instead of in person.

Educational and cultural organizations are rolling out resources as well. For example, “Indigenous Wisdom,” a downloadable K-12 curriculum created by the Indian Pueblo Cultural Center Museum, is available at indianpueblo.org. Albuquerque Public Schools begins new distance learning classes in April at aps.org and the Museum of Indian Arts and Culture hosts audio talks by Native artists at indianartsandculture.org, to name a few.

“The increased level of federal funding from the United States Department of Agriculture and the Federal Communications Commission is a welcome blessing,” said Badal. “The (grants and loans) should be pursued by the Navajo Nation and the telecom carriers that serve the Nation,” he said.

“Sacred Wind is working on applications under several of these programs and is eager to work in partnership with the (Navajo) Nation’s leadership,” he added.

“My husband and I would like to have the internet,” said Willie. “I have a sister who lives up on the hill and I’m pretty sure she would love it, too.” Community member Helen Tafoya said the internet is especially important for students but elders, like her mom and aunt who raised her, need basic services – phones.

The company helps customers apply for a federal discount program called Lifeline Support. Sacred Wind Communications was one of many organizations who supported former New Mexico state Sen. Leonard Tsosie’s vision many years ago to make the internet available to every citizen of the Navajo Nation.

“I’m going to call Senator Tsosie, I still call him senator, and let him know his dream is being realized (referring to Sacred Wind’s service area,)” said Badal. Badal said the high-speed system at To’hajiilee is scheduled to be up and running in the fall of this year.

Chapter President Begay added that Sacred Wind steps up to help the community in other ways. Recently, the company donated nearly $1,000 to purchase flour and beans for elders and high-risk community members who can’t leave their homes during the COVID-19 health crisis. “Whenever we hear about a specific need of the people, we want to be there for them,” said Badal. “Sacred Wind has been a friend to us,” said Begay. “A big shout out to John Badal and his staff!”