After 14-year break, wrestler goes for pin to win state

The North Sanpete High School senior beat out a pair of seasoned grapplers during the Utah 3A state-wrestling tournament last month in the 182-pound weight class. 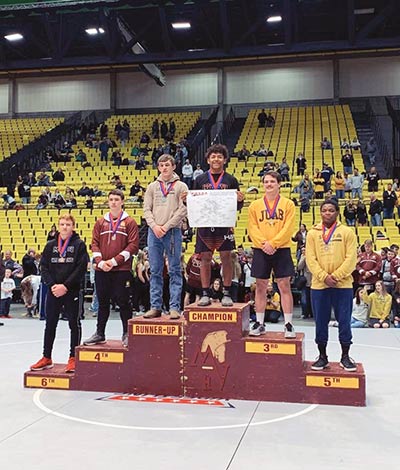 “It’s amazing,” said Kaibatony, who started wrestling competitively one year ago after taking at least a 14-year hiatus from the sport.

In the 16-individual state bracket, Kaibatony earned a first round bye and in the second he defeated Grantsvillie junior Cruz Baldovinez by a 9-2 decision.

In the semifinals, he earned a fall over Juab High senior Charles Watts, last year’s state runner-up, in the second stanza for a berth to the finals.

And while he led by a three-point margin in the finals, Kaibatony pinned South Sevier senior Taylor Hunt for the title with 38 ticks left in the third.

“It was a competitive match but in my head I wanted to go for a pin,” said Kaibatony, who finished the season at 51-6 overall.

With his state title, the Pleasant, Utah, wrestler bettered his season record by 20 more wins as Kaibatony compiled a 31-18 record last season while wrestling at 195.

And while it may have seemed like a long shot, Angie said she was real proud to see her son atop the podium in his weight class as there were so many things conspiring against him.

“When he hit ninth grade he wanted to wrestle again but he didn’t have that many wrestling friends,” she said. “He was more or less harassed that year so he stopped wrestling.”

But as he entered his junior year, Jaden wanted to wrestle again and after a so-so season he knew he had to get better with his technique.

“Last year all he had was strength,” his mom said. “He didn’t have any wrestling moves so Jaden would try to overpower his opponent.”

After his junior season, Jaden joined a wrestling club in Nephi, which is 21 miles away from their hometown.

“Jaden worked with his coach and he taught him a lot of moves,” Angie said of Tanner Cowan, who happens to be the head wrestling coach at Juab High School, a 3A rival school of North Sanpete High.

“He worked with him a lot during the summer. He continued to work with him during the football season,” she said. “He went to camps too so he had to work 110 percent to get to where he’s at right now.”

According to his mom, Jaden was adopted when he was a few hours old from a San Carlos Apache mother and a Diné father.

“He was born at the Gallup Indian hospital,” she said. “He’s actually a fourth generation descendant of Geronimo so he’s got some good lineage.”

Angie said Jaden got his initial start in wrestling when his father, Gary, entered him in a wrestling tournament when he was three years old.

At that wrestling tournament, Jaden wrestled a kid his size and during the match he accidentally broke that little kid’s finger.

“Jaden was real upset that he hurt that kid,” his mother said. “When that happened he went under the bleachers and he cried. He told us that he was done, and he’s not going to wrestle again.’”

With wrestling put on the backburner, Jaden picked up other interests and as he got older football was the only sport he participated in.

This past season he helped the North Sanpete to an 11-2 record by playing guard on the offensive line.

“I really didn’t do anything but play football,” he said.

And while he vowed to never wrestle again, Jaden said he had gnawing feeling to get back on the mat.

“I like that it’s a demanding sport both physically and mentally,” he said, while adding that he’s hoping wrestle at the next level.

“I want to wrestle in college,” he said.

And if he doesn’t have any suitors, Jaden said he’s going to enroll at a tech school and pursue a field in welding.