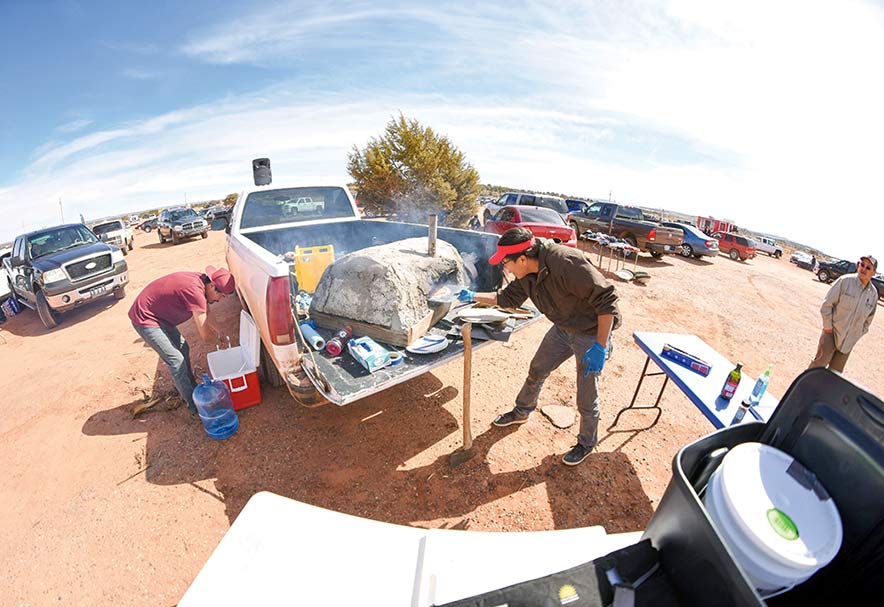 Kalvin Phillip Manheimer was playing video games one day – two years ago – when his friend Christian Tuni pulled into the driveway of his home and asked him if he would like to sell pizza.

“I asked him, ‘How are we going to sell some pizza, man? Are we going to home deliver them?’” Manheimer said. “He said, ‘No, I got a pizza oven and then he showed me (a portable wood-fired pizza oven). I said, ‘Wow, this is really amazing.’”

Tuni, 23, showed his childhood friend how to make pizza, from making the dough to finishing it off with toppings. “He trained me (there and then),” said Manheimer, 24, “and I got into it. So, we’ve been doing it on weekends. “When he goes off to school,” he said, “I always tell him, ‘Everyone’s asking for a pizza.’ I don’t know why, but I’ll be at the store and people will ask, ‘Hey, do you guys do delivery?’ I say to them, ‘No, my boss is at school right now.’”

Christian and Kalvin have been selling personal-size pizza nearly every weekend for about two years at the Crossroads Flea Market in their home community of Ts’ahbiikin. They travel in a Chevrolet Silverado long-bed truck – a mini kitchen on wheels – with everything they need to create the perfect pizzas, cook them and sell them.

“We started off around two years go … at a (Christian) music festival, (where) we started selling for just $5,” Tuni explained. “That’s when people said, ‘Hey, your pizza is good. You should sell them.’ I’m like, ‘Yeah, we should.’”

Tuni, at the time, had just learned to make pizza from the culinary arts program at Southwestern Indian Polytechnic Institute in Albuquerque, and took part in cooking functions while going to school. “That’s the one thing that stuck with me, is making pizza,” Tuni said. “Like, dang, this is fun.”

When Tuni’s cousin told him one day he’s making pizza in a wood-fired pizza oven, he interjected and said he, too, knows how to make pizza that he learned from SIPI’s chef, Leonard Bailey. “My cousin, he’s a real handyman. He makes knives and whatnot. Right now, he’s going to school in Scottsdale,” Tuni said, adding that he asked his cousin if he could borrow his oven for business.

“Technically it was his and then he stopped using it and I asked, ‘Mind if I borrow it? We’ll use it and make pizza,’” Tuni said. The oven he borrowed has crumbled since then and he and Manheimer had to build a new one, which they made from half a steel barrel, stucco and chicken wire on a wood foundation.

Manheimer and Tuni said their new oven can reach very high temperatures, distributing the heat evenly so that pizza cooks perfectly within 10 minutes between 500 to 800 degrees Fahrenheit with a golden bottom and little charring on the top. “It gets really hot just from that little opening,” Tuni said. “This oven can handle only a personal size.”

When a pizza comes out of the oven with leopard spotting, a subset of charring, that means it’s been perfectly cooked and has character. “The leopard spots, those are the tasty spots,” Tuni added.

Tuni and Manheimer want to convert their small pizza business into a restaurant, but the biggest challenge for these aspiring entrepreneurs is getting off the starting line. “We’re trying to start from the bottom and then slowly working our way up,” explained Tuni, who is Manheimer’s boss and business partner. “We could ask for support from our parents, but we don’t want to do that. We want to do this on our own. That’s what we’re doing. Everything we got is from selling pizza.”

“I really like the idea of working from the bottom up,” said Manheimer, who didn’t go to culinary school, but has worked in restaurants before. Tuni said all of their ingredients are from either Crossroads Store, Inscription House Trading Post, or from the nearby Bashas’ grocers. “We have two stores here that pretty much sell all the ingredients to make pizza,” Tuni said. “We usually make a test pizza just before we start selling, but since the demand is so high, we didn’t get to make a test pizza (on Saturday afternoon).”

Of course, thousands of people all over the world make pizza, but Tuni’s and Manheimer’s recipe is uniquely Navajo. They said they use only blue corn meal and Blue Bird flour to make the dough. “Everyone has yellow corn meal, so we decided to use blue corn meal, which works. But blue corn meal tastes better,” Tuni said.

Tuni said all of their equipment is from home: rolling pins, pizza cutters, and pans. And everything they use is always sanitized and clean before they arrive at the flea market on weekends when they sell. The fun part, though, is the skin burns from manning the oven, Tuni said. But pizza is not all the young men sell.

“One day we sold shrimp fried rice – fried rice because we had to do repairs on this oven,” Manheimer said. “Now, I got a skillset on making pizza. “I always ask people, ‘How’s our pizza?’ They’ll say, ‘Oh, it’s better than Pizza Edge.’ I’ll say, ‘No way! Shucks!’ And then laugh like Goofy,” he said.

“But we try to make ourselves unique,” he said. “Food truck vendors have their big trucks, but sometimes we’ll put on a sword and dress up like characters. “People will ask, ‘Why do you have a sword?’” he said. “We’ll say, ‘Just in case if anyone wants to fight for a free pizza. If you win, you get a free pizza.’” Manheimer added, “I’m doing this with my friend and one day we want to open up our own restaurant – see where this goes.”

Tuni and Manheimer sell pepperoni pizza for now, until their budget is a little higher for different ingredients. They sell a personal-size pizza for $5. The Crossroads Flea Market is located at the intersection of Arizona Route 98 and Indian Route 16 in Ts’ahbiikin-Crossroads, Arizona.