Aztec sibs encourage each other to wrestling titles 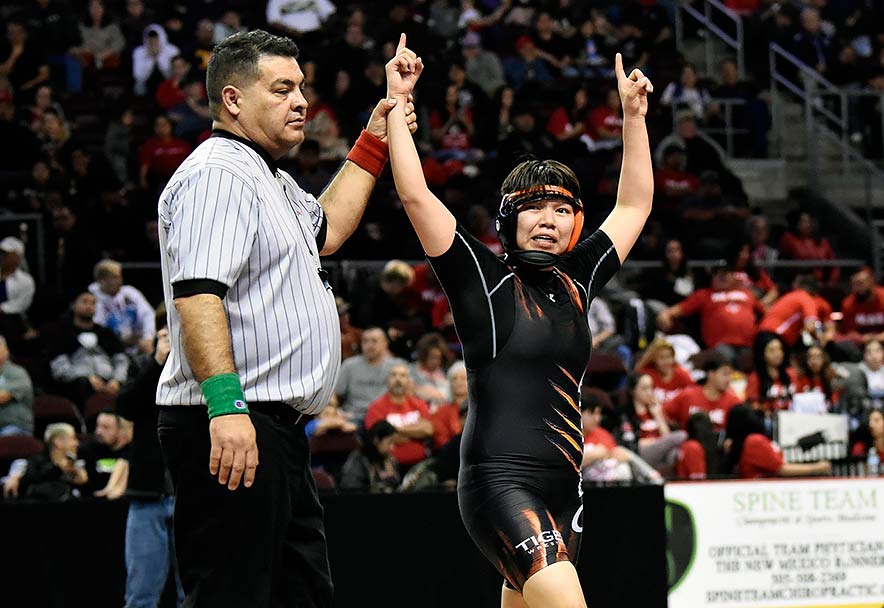 Princess Altisi and Malcolm Altisi knew it was their year.

At the start of the wrestling season, the Navajo siblings and wrestlers for Aztec High School vowed to each other that it was finally time to walk away victorious from the New Mexico Activities Association State Wrestling Championships.

Last week, they did just that. Princess, a sophomore, placed first at 160 pounds in the officially sanctioned girl’s wrestling state championships and Malcolm, a junior, placed first in the same weight class in the boys’ competition.

Princess Altisi said it was a goal fulfilled.

The siblings, who have roots in Shiprock, started wrestling at a young age and adopted a deep affection for the sport. They both dreamed of being state champions, but were never quite sure when it would happen.

The two fell short in previous state competitions, but there was something different about this year. Both put in the work, but most importantly, both were hungrier than they had ever been.

Princess fell short to her archrival, Miyamura High School’s Nancy Rodriguez, in the championship round the last two seasons. This year, Altisi knew Rodriguez was a senior and that if there was a year to get a win against her this was it.

“Honestly, at the beginning of the season I wanted to go (to a different weight class) but I really thought hard about it and decided to stay at 160 because I wanted to wrestle Nancy again, and give it one last year,” Princess Altisi said. “The past two years didn’t really count. This year was the actual first (sanctioned) girls’ state championships, and this is when I told myself this is when it really counts.”

Princess said it was no secret that Rodriguez stood in her way, which is why she used all resources and made changes for a different outcome this season.

She said sought help from her brother and got her mind right.

“At the beginning of the season I was mainly working on mindset, then as it kept going along I started working on my technique, stamina, and speed,” Princess Altisi said. “My mindset this year is a lot better than last year and the years before. At the beginning of the season I told myself I’m going to be a state champion this year. I kept telling myself before very match, and in the end, I got the title.”

Princess entered the tournament with a 24-2 overall record and seeded No. 1 in her weight class. She defeated her first two opponents by pin and met Rodriguez in the finals where she won by a 5-2 decision.

Her determination crossed over to her brother Malcolm.

As a freshman, Malcolm did not qualify for state competition. As a sophomore he qualified but did not place, and last season, he finished in fifth place. 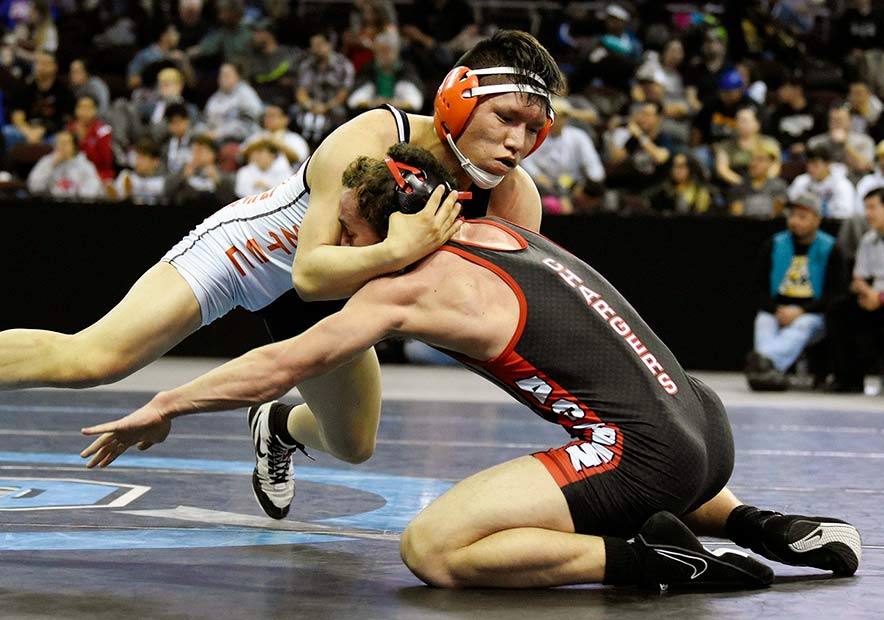 Having fallen short in previous seasons, he was determined to make this his year.

“Going into the season, me and my teammate … we told each other that we’re going to be state champions,” he said. “That was the goal I set. I worked way more harder than the last two seasons. I lifted harder and conditioned harder, just strengthening my mindset even more.”

Malcolm said much of his success was the result of taking a long, hard look at his past performances. He said falling short in previous years pushed him to do better.

He said he wasn’t going to let the season pass without earning a state title.

“It was way more important because it was the only goal I had coming into high school as a freshman,” Malcolm said. “I didn’t get it the last two years and I told myself this is the year I’m going to do that. I was able to bounce back and learn from it. It made me a better wrestler.”

His previous and current season boiled down to his performance at the state tournament over the weekend. There, he entered 34-6 overall. He defeated his first opponent by a pin. Moving on to the semifinals, Altisi defeated Grants’ Johnathan Naef by a 4-3 decision, securing his spot in the championship round.

In the finals, he met Academy’s Sebastian Martin in a match he felt most prepared for and defeated him by a 3-2 decision.

“The first day went fairly smooth and the second day was a lot tougher. My semis and finals were about the same,” he said. “I told myself that I’m going to win this match and keep at my pace, I’m not going at my opponent’s pace. It feels really good to win. I still have a hard time believing it.”

What wasn’t difficult to believe was that his sister, Princess, was also a state champion.

“I already knew she was going to be a state champion,” Malcolm said. “I told her at the beginning of the season … the only person she has to worry about is Nancy.”

Princess said she had her fair share of challenges this season, but fortunately for her Malcolm was there to encourage her.

She said she defeated Rodriguez twice in the regular season, which also boosted her confidence, but it was her brother who motivated her most.

“I had ups and downs here and there but I didn’t let that try to affect my wrestling,” Princess Altisi said. “During practice we would partner up and he would ask me if I’m ready or if I know what to do if I’m in a bad situation. He could push me to where I wouldn’t want to do any more, but him pushing me to where I don’t want to go anymore just makes me realize I can do whatever if he just pushed me like that.”