Growing up in Dubuque, Iowa, AJ Goldman heard the same narrative about Christopher Columbus that was being taught in countless classrooms around the country.

“He was an explorer,” recalled Goldman, 42, whose roots are in Tolani Lake, Arizona. “He was a hero. He discovered America.”

It didn’t occur to Goldman at that age, and his teacher certainly never brought it up, that the errant Italian had started the wave of European colonization that would eventually send his own Navajo tribe on the Long Walk, and lead to similar atrocities all over the Americas.

Across the Atlantic in Italy, a slightly younger schoolgirl named Lucia Palmero was hearing a similar narrative, only in her case, Columbus was not only a national but a local hero. She grew up in Genova, Columbus’s hometown. 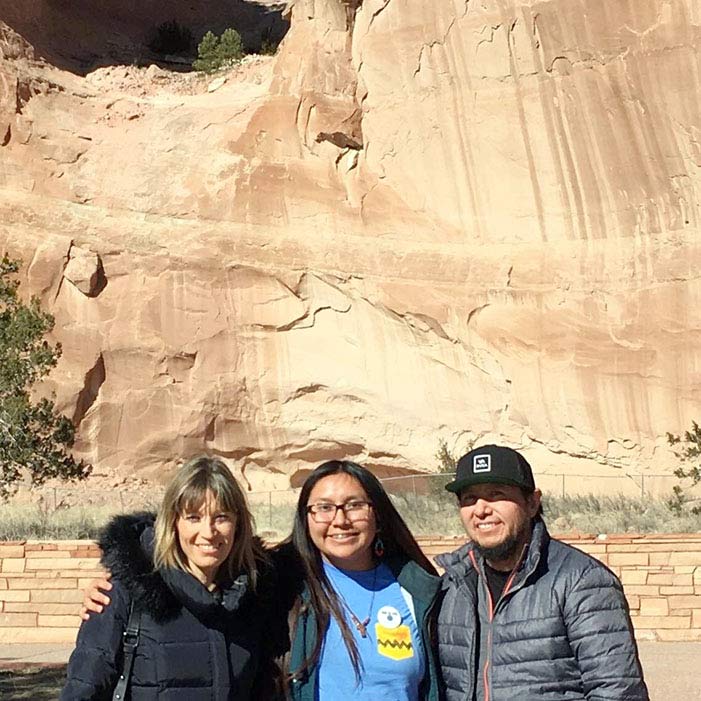 “There are statues of him all over the city,” said Palmero in an interview at the Times office last week. “The city is very proud to be the birthplace of Columbus.”

The two grade school students from the New World and the Old both grew up to be artists.

Palmero uses visual and performance art to explore issues like borders and barriers, and recently the impact of agricultural chemicals on her native Liguria.

Like most people who pay attention to stuff, Goldman and Palmero eventually learned the truth about Columbus: that he was a brutal colonizer whose own diaries reveal his plans to enslave the population who basically saved his life while he was lost at sea.

Palmero was probably more shocked than Goldman, who, as a Native American, was used to being invisible when it came to U.S. history.

“I felt pretty much cheated by the education system,” Palmero said. “You go to school and you think you have the good information, and you’ve actually been lied to. It’s upsetting.”

About three years ago, each of the two was working independently on ways to turn their art toward the movement to replace Columbus Day with Indigenous People’s Day when a mutual friend introduced them. The Italian and the Native American decided to collaborate.

“Our primary goal was a dialog between the two cultures,” explained Goldman. “We’ve both been cheated and lied to.”

Goldman started making videos of Natives, including several Navajos, talking about what Columbus means to them.

At the same time, many of the interviewees wanted the Italians to know that they didn’t blame them for what happened 500 years ago.

“I’m not attacking anybody,” Benallie says in her video. “We can stand up to the education system together and tell them to stop lying to us.”

“When you don’t have a common memory, you cannot create community,” argues Diné historian and U.S. Presidential candidate Marc Charles in a speech in Washington, D.C. that Goldman and Palmero recorded.

Goldman and Palmero called their project “Uncovering of the Americas.”

On Oct. 12, 2018, they showed the videos at Genova’s Castello d’Albertis, a palatial family home of the merchant era that has been converted to a Museum of World Cultures.

The response was overwhelmingly positive. “We had teachers, people with master’s degrees, coming up to us, saying, ‘I didn’t know,’” recalled Palmero. “We had high school students saying, ‘I’m going to celebrate Indigenous People’s Day next year!’”

Of the hundreds who saw the exhibit, Goldman recalls only three or four who responded negatively.

Last year, they did the exhibit again, adding a livestream of elders from the Taïno community of Higuayagua, one of the first villages to meet Columbus and his crew. A Taïno medicine man did a blessing for the gathering.

“It was powerful,” recalled Goldman.

Although their famous ancestor had “discovered” America, Goldman was the first indigenous American most of the Genovese had met.

“I felt honored to make that connection, to build that bridge between the two cultures,” Goldman said.

What’s next for “Uncovering”?

“Now that we’ve made the connection, it deserves care,” said Palmero. The artists would like to expand their library of videos, and Piero Gobetti High School in Genova is asking for a personal dialog with Native American students their own age, which the Santa-Fe-based Goldman is in the process of facilitating, probably with Window Rock. He would like to develop relationships with other Native schools to encourage more trans-Atlantic connections.

Palmero would like to enlist Marc Charles as a collaborator to tap his expertise as a historian and educator. “AJ and I are artists, not teachers,” she explained. “We’re just the ones holding the microphone.”

Expanding the project is going to take time and money. So far the pair has been self-funding it and doing all the work, from filming the videos to translating them into Italian, themselves.

“We need money for travel and we’d like to maybe hire a cameraman and a translator,” Goldman said.

There are large corporate grants available for this type of work, but in the spirit of decolonizing, Goldman wants to keep the project “raw and independent.”

“If we get any funding, I want it to be grassroots,” he declared.

Palmero feels that now that “Uncovering of the Americas” has exposed the truth, the next step is “healing.” Ultimately, she wants her city to stop celebrating Columbus and start celebrating the amazing cultures he encountered and, despite his best attempts, failed to destroy.