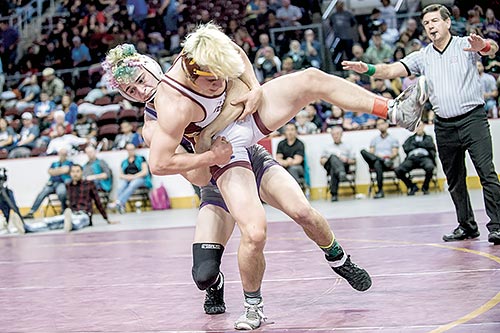 For the last 13 years of his wrestling career, Miyamura High senior Alias “AJ” Starkovich took his place on the center of the mat as his father took his corner.

His final high school match last weekend was like any other match. His father and coach Kenneth Starkovich encouraged him and reminded him to do the little things. And when Alias found himself nearing trouble, he would look to his corner.

That led him to a 2016 New Mexico state wrestling title in Rio Rancho, N.M.

Alias defeated Belen High’s Lano Luno for the 5A state title in the 152-pound weight class becoming the Patriots’ second ever state wrestling champion. He finished the season with an overall record of 47-1.

“It’s amazing being a state champ, it’s just something I’ve dreamed about the for the past 13 years, ever since I started wrestling, that’s really the ultimate goal in high school,” he said.

“We knew that he was a talented kid,” he said. “He actually left the sport for a couple of years. When I was coaching he would still come to practice and wanted to wrestler.”

Alias returned to the mat when he was in seventh grade. He eventually wrestled for Gallup High before transferring to Miyamura where his father also became the head coach for the team.

By that time, Kenneth said his son had already suffered a broken leg and concussion but had an undefeated season.

As a freshman, Alias qualified for the state tournament but missed placing by one round. From that point on, everything Alias did was about progress.

“Wrestling is a very different and interesting sport; everything is a process. Very few people can walk into the wrestling room and be good,” he said. “The more you wrestle, the better you get. The mat time over the years kept me progressing.”