The current girls’ wrestling season is on pace to be one of Winslow High’s best yet.

The Lady Bulldogs have six girls in the program and they all have an equal chance of earning medals at next week’s Arizona Interscholastic Association girls state wrestling tournament. 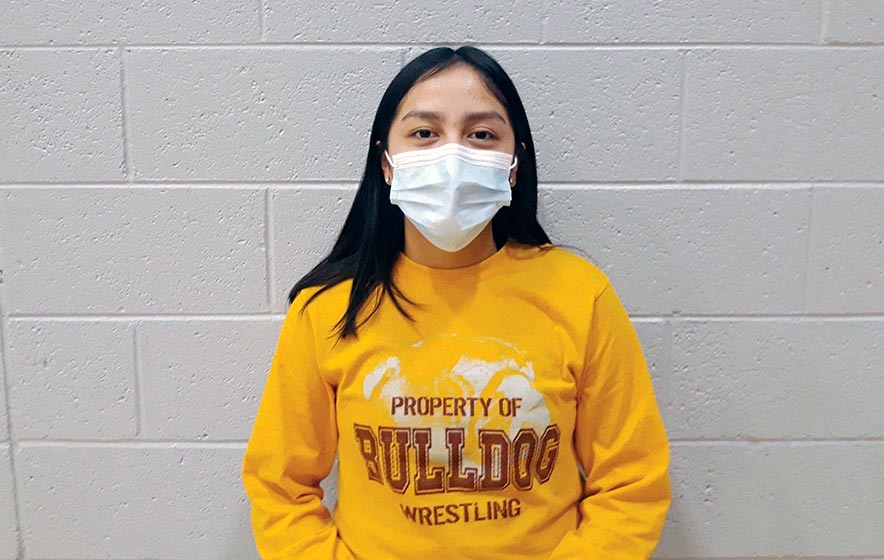 Navajo Times | Quentin Jodie
Winslow wrestler Riley Davila improved her overall record to 5-0 at the Barry Goldwater Dual on Saturday. The 120-pounder is looking to earn a medal at state.

“I expect to have at least one state champion,” Winslow coach Scott Larsen said. “I can’t tell you which one will win state but several of them are doing well this year.”

Of the six wrestlers, four are making a return trip to state with Ragnoli being the only state placer. At last year’s tournament, the Winslow junior placed sixth in the 185-pound weight class.

For the upcoming state tournament, Ragnoli is going to compete in the 170-pound weight class.

“I just hope that I can place higher than I did last year,” she said.

Going into yesterday’s dual with Mesa High, Ragnoli is sporting a 4-1 record, having lost her only match to a Westwood opponent.

“I have not seen many girls in my weight class this year,” she said. “Right now, I’m just working hard because the wrestlers at state are pretty difficult. They’re all aggressive.”

At 106 pounds, Cordova is looking to have better results at state, as last year’s tournament was a complete wash for the then-junior. 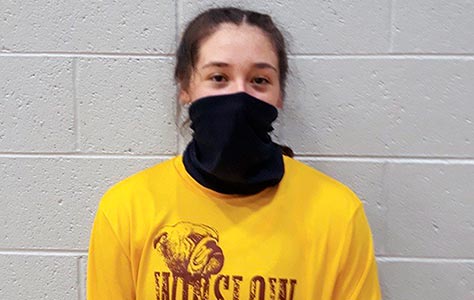 “I experienced some heartbreaks,” Cordova said. “I sprained my ankle in my first match so I didn’t get to compete at my best.”

Despite nursing a nagging ankle, Cordova said she finished off the match.

“I didn’t let her pin me,” she said of her opponent. “Once I lost I couldn’t go far after that.”

With it being her senior year, Cordova said she would like to go out with a bang and medal this year. She draws inspiration from the fact that her grandfather, Richard Cordova, was Winslow’s first individual state champion.

“I’ve always been interested in the sport but they never had a girls’ team until three years ago,” she said. “Once we formed a team I jumped on that at because I wanted to wrestle.”

And while she has high aspirations for state, Cordova said she lacks mat-time experience. Going into yesterday’s dual, she’s only had four matches all season long.

“It’s frustrating but you gotta go out there and do what you have to do,” she said. “All I can do is work a lot harder in the room because it’s hard to find people in my weight class.”

Davila, who is Diné, is another wrestler that would like to make better memories at state as she got as far as the state quarterfinals last season. She competed in the 118-pound weight class, missing the podium by one match.

“Last year, my goal was to make it to state since I didn’t qualify my freshman year,” she said. “This year I want to try and place, even if it’s fifth or sixth.”

As a third-year grappler, Davila said she was initially drawn to be a cheerleader but once she got a taste of wrestling she quickly fell in love with it. 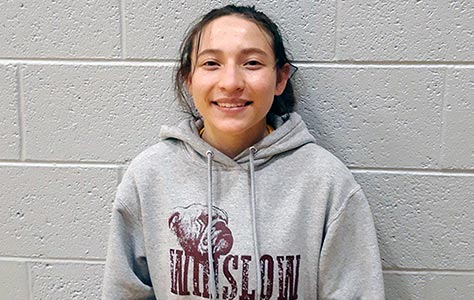 Navajo Times | Quentin Jodie
Winslow’s Alyssa Cordova is looking to have better results at next month’s state wrestling tournament. Last season, Cordova sprained her ankle in her first match at state, limiting her ability to compete.

“I had an uncle that wrestled and he was like ‘You’re going to wrestle,’ but I always wanted to cheer,” she said. “And when he passed away I wanted to try wrestling and ever since then I liked it.”

Davila said she carries a picture of her late uncle, Edmund Benally, and that photograph inspires her to do her best.

Heading into their final dual of the season with Mesa yesterday, Davila remains undefeated with a 5-0 record at 120 pounds. She improved her chances for a state seeding after beating her Liberty High opponent by a 7-3 count in a dual hosted by Barry Goldwater High on Saturday.

Larsen said the dual on Saturday was very challenging, something his team needed as they prepare for state.

“They’re both top programs,” the Winslow coach said of the Liberty and Barry Goldwater teams. “We didn’t have any type of matches like that at the beginning of the year but when you wrestle good programs it’s going to get you better.”

Larsen said the competition on Saturday gave them a better understanding of where they measure up against some of the state’s best.

“We faced some tough competition but overall I thought we did pretty good,” he said. “I liked the effort we gave.”

In addition to Riley, Benecke won her match on Saturday as she pinned her Liberty opponent with 12 seconds remaining in the first period while Ragnoli won her match by a forfeit.

“We had some good matches,” Larsen said.

At last year’s state tournament, Benecke lost her first match by a fall but Larsen is expecting big things from his junior grappler.

“She’s gonna come out and compete every time she’s on the mat,” he said.

Larsen said Lopez is another wrestler who is expected to medal at state early next month. She missed qualifying for state last year as she placed third at the sectional meet. The Arizona Interscholastic Association took only the first- and second-place finishers at sectionals to state.

“I was pretty close at making state,” Lopez said. “I wrestled four matches that day and I lost my second match.”

With the state tournament on the horizon, Lopez feels that the entire squad in primed for great things.

“We’re definitely excited about state,” she said. “Our team has been working really hard. We’ve been working since the summer, you know, with weight lifting and I think our coaches have really done a lot for us. They’re just so awesome; they pushed us enough to where we can accomplish a lot of things this year.”

And while he can take some credit for that, Larsen said the accolades his girls will receive this year will be based on their own merits.

“I’m just so proud of them; they’re doing a great job,” he said. “They’ve worked so hard this season and everything they earn this year is well-deserved.”