One of the most compelling subplots entering the delayed New Mexico prep basketball season is the recent announcement of Shannon Dale being nominated to the 2021 McDonald’s All-American basketball team. 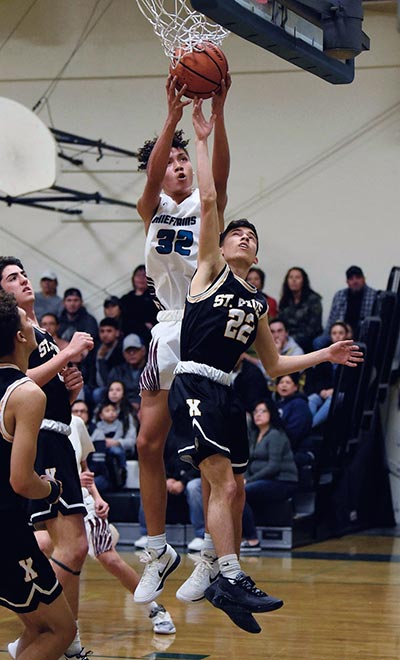 The 6-5 forward got word of this prestigious recognition last week from a family group chat.

“I didn’t even know,” Shannon said. “I’m kind of freaked out that I actually got nominated.”

The Shiprock High athlete is from Naschitti, New Mexico and his parents are Alfred Dale and Shar Jeff. In addition to basketball, Shannon is also a cross country runner for the defending district champs and a member of the track team.

“I’m glad that he was being recognized for an award like this,” his dad said. “His coach texted me and I was real surprised. This recognition exceeds what I did in high school by a lot.”

“I’m very proud of my son,” Jeff chimed in. “He’s very humble and he doesn’t boast or brag about himself. He keeps to himself but to have this honor is something really special.

“We’re all surprised about this but I believe what we teach our kids is real important,” she said. “As parents we expect a lot out of them and I feel that we’re very fortunate.”

Shannon was among 700 boys and girls nominated as the McDonald’s All-American team was announced on Tuesday. Due to the ongoing pandemic, the game itself will not take place this year.

When asked about what it meant to even be considered, Shannon said all the sacrifices he’s made over the years are bearing fruit.

With this recognition, Shannon acknowledged that he has some responsibilities to take on.

“To be recognized among some of the best high school players in the nation is great but I feel like I need to be a role model for others,” he said. “I’d like to thank my coaches, teammates and parents for pushing me. I wouldn’t have gotten to where I’m at without them.”

“That kid works hard and I have to credit his upbringing,” Atcitty said. “His parents did a extraordinary job. They took him out there and exposed him to different levels of competition throughout the state. When he was able to travel, Shannon got to see a lot what’s out there and he was able to step up his game and play hard.”

Atcitty said Shannon’s rise as an impact player has been dramatic and he attributes that to his growth spurt. According to his mom, Shannon has grown 10 inches since his freshman year.

“I would say his growth spurt helped him a lot,” he said. “I think it really complements his game. He just has the ability to excel, even when the going gets tough.”

Atcitty said Shannon has an inside-outside game that makes him a target for opposing teams.

“He definitely can shoot the ball,” Atcitty said. “He’s added that arsenal to his game. He can attack the hoop and be just aggressive.”

Atcitty said Shannon is an excellent rebounder too.

“Sometimes he gets overlooked on that part,” he said. “He led the team last year but I think overall he tries to get his teammates incorporated into the game. He finds his teammates very well and he does a good job distributing the ball.”

And although he put up gaudy numbers last season, Shar said it took some time for her son to grow into his frame.

“He’s a late bloomer in regards to playing basketball,” she said. “He really didn’t start playing until junior high and when he got to high school he was still shorter than me and I’m 5-8.”

By the time he reached his sophomore season, Shannon started his growth spurt and he had some difficulty adapting to his size.

“Because he was tall they were expecting a lot from him but I think he was adjusting to his height, and his own length of his arms,” she said. “It was hard for him to get that all coordinated together.”

The following season he carried the team, helping Shiprock to a fifth place finish in the district standings.

“I think what separates him from others is his length,” his dad said. “With his size, it makes it hard to defend him. He can shoot over every one.”

Having a quick step, Alfred said, is another advantage his son has. In addition, he’s noticed that Shannon has improved his dribbling skills.

“For somebody that tall he can handle the ball pretty well,” he said. “He’s just an all-around player because he can drive, he can shoot and he can rebound.”

With the ongoing pandemic cancelling all tournaments and camps around the country last summer, Alfred said his son spent a lot of time in the weight room toning his body.

“He put on some weight with muscle mass,” he said. “I think that’s going to make a big difference this year.”

The delayed basketball season is slated to start on March 22 and according to Atcitty they have 10 games scheduled.

“What we have on our schedule is district games and I’m not sure if we’re going to add any more games,” the Shiprock coach said. “Even if we only play those games we’re excited about the season. We’re going to have some fun and Shannon will be fun to watch, along with his teammates.”