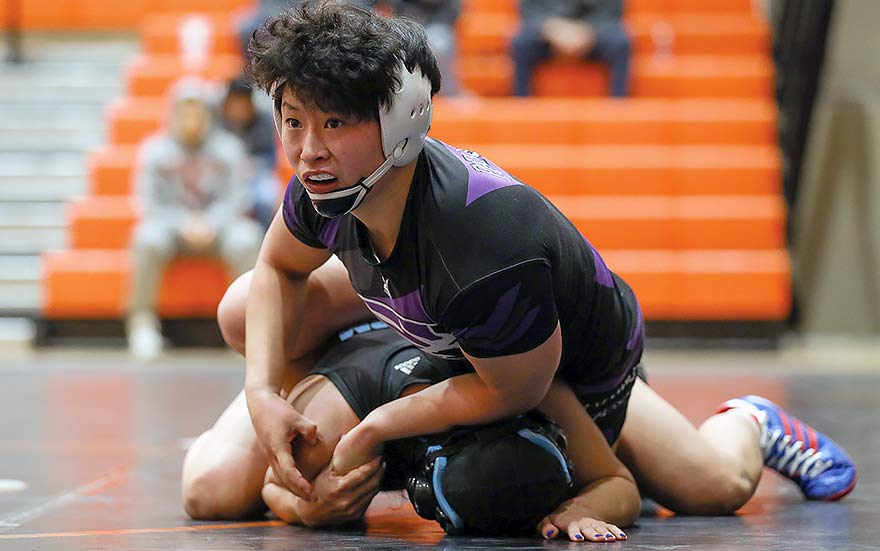 Special to the Times | Curtis Ray Benally
Miyamura’s Yele Aycock attempts to turn over Cleveland’s Samantha Tuttle in the second round during the 131 lbs. match on Friday, Jan. 25, at the 1st Annual Girls Wrestling Tournament at Aztec High School.

The Lady Patriots made history last season when they brought home the team’s first state title in the sport after winning big in the first-ever New Mexico high school girls’ wrestling championship tournament.

Miyamura head coach Ozzy Guerrero said the team is as hungry as ever for a second-straight title.

“It’s definitely driven them,” he said. “It seems like they’re actually pushing themselves more in the wrestling room, and they know they do have a target on their backs. So far it’s looking pretty good.”

Guerrero said the numbers have increased thanks to the success the girls’ team had last season.

“This year we had seven girls and last year we had four … This year we’re looking to do just as good as we did with four but with more girls,” he said. “The school is actually working on getting us a banner for the girls, which is really exciting … Hopefully that will bring our numbers up.”

So far, the team is doing as well as its coach had anticipated.

At least three returning state competitors have returned to the team, two of whom were named state champions.

The team competed in the inaugural Aztec Girls’ Wrestling Tournament last Friday and won as a team with 67 points. Aztec came in second with 40 points and Belen in third with 23.