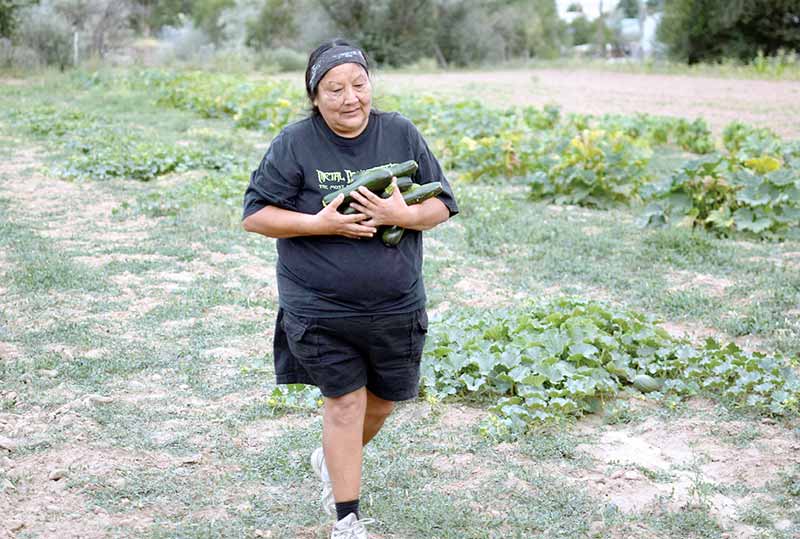 Donovan Quintero Navajo Times Shiprock farmer Cheryle Yazzie carries and handful of saquash that was able to grow despite not being watered for over three weeks on Sunday in Shiprock.

Politics around the Aug. 5 Gold King Mine spill turned toxic this week as farmers along the San Juan River sparred with each other, the Begaye administration and their Council delegate over whether to allow the water, which some believe is still contaminated, into their irrigation system. 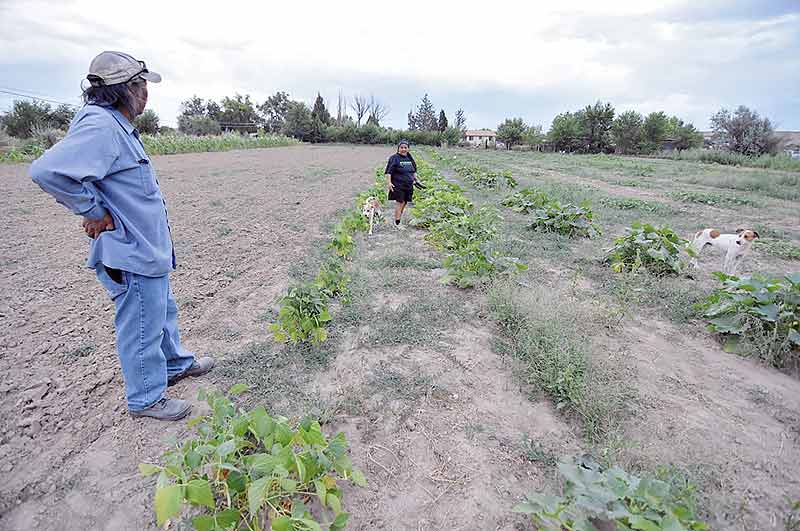 Donovan Quintero Navajo Times
Shiprock farmer Earl Yazzie and his wife Cheryle Yazzie assess their field of dying crops Sunday in Shiprock. More than three weeks have passed since they watered their squash, corn, watermelons and cantaloupe; due to the the August 5 toxic water spill that contaminated the Animas and San Juan Rivers.

Meanwhile, an international clean water advocate who took independent samples received his findings and recommended leaving the water off until more research can be done.

Scott Smith of the organization Water Defense took samples Aug. 11 and 12 and promised to come back to present them to the community along with a toxicology report the week of Sept. 13.

Smith said his results differed from the U.S. EPA’s because he uses a special method collecting a sample over a 30-minute period, “which is more how organisms are exposed to water.”
“We need a lot more work with the Navajo Nation, colleges and communities so they can test their own water and draw their own conclusions,” Smith said.

Both the U.S. EPA and the Navajo Nation EPA have declared the water safe to irrigate with after a 13-million-gallon plume of toxic mine waste made its way down the Animas River, into the San Juan and ended up in Lake Powell.

Communities upstream of the Navajo Nation in New Mexico and Colorado have been using the water since Aug. 15.

Donovan Quintero Navajo Times
Shiprock farmer Cheryle Yazzie carries and handful of saquash that was able to grow despite not being watered for over three weeks on Sunday in Shiprock.

Both agencies have said heavy metals in the water have returned to normal levels, although NNEPA has refused to release its results pending a lawsuit by the tribe against the U.S. EPA. Findings of the U.S. EPA, which accidentally caused the spill while doing an investigation at the Gold King Mine above Silverton, Colo., are available online at epaosc.org/goldkingmine.

Over the past week, Gadii’Ahi/Tokoi Chapter voted 16-4-0 to turn the water on, Tsé Daa Kaan voted 19-16 to keep it off and Shiprock voted 71-1-3 to leave it off (affirming a previous vote) and to call a meeting of all the affected chapters with President Russell Begaye to formulate a unified response.

At the moment, the waters are troubled. Farmers in Upper Fruitland, Nenahnezad and San Juan Chapters have been using their canal system since Sunday after Begaye approved a resolution from Dist. 13 leaders asking him to open the headgates, but irrigation systems downstream from Tsé Daa Kaan to Aneth, Utah, remain closed.

The canal system from the San Juan River irrigates about 1,000 farms in the Navajo Nation.

The Navajo Nation Council’s Resource and Development Committee passed a resolution last week lifting Begaye’s Aug. 8 state of emergency declaration so the water can be used, after the Navajo Nation EPA decided it posed no threat to crops (restrictions have not yet been lifted for watering livestock).

Begaye countered Tuesday with a request to the Federal Emergency Management Agency for a federal disaster recovery coordinator to help the Nation deal with the effects of the spill.