50 Years Ago: Bowman, Times editor find themselves at odds 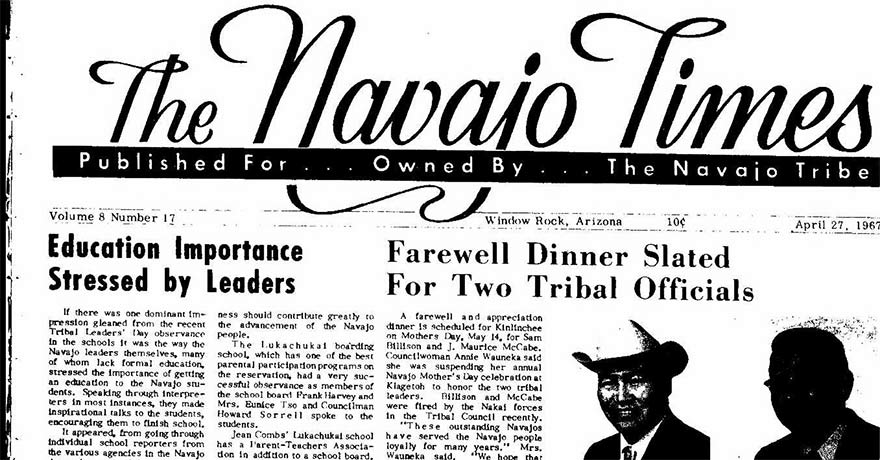 J. Tonney Bowman was one of those persons who could be counted on to appear in the Navajo Times on a regular basis.

In later years he would run for tribal chairman and lose, sue the Navajo Times for $10 million and lose, and then find himself appointed a tribal judge.

During his unsuccessful run as tribal chairman in 1978, Bowman paid for a full-page ad in the Times in which he listed all the bad things Peter MacDonald did during his seven years in office.

The ad had this statement on the bottom: “People have been shot for this. Veterans take note.”

I was head of the Times at the time and I thought some people might look on that statement as a request for a veteran to take a shot at MacDonald, so I refused to allow him to put that statement in the ad.

As I remember what happened next, we argued about it for a while but I was supported by the tribe’s general counsel, George Vlassis.

I told Bowman he could replace it with something else and he decided to put in a statement that his ad was censored by the Times.

Later, a few months after he lost in the primary, he filed suit against the Times and MacDonald, saying that had he been allowed to put that statement in, he would have probably have come in first in the primary. I was told later by Vlassis that the lawsuit had been dismissed, possibly because of sovereign immunity.

We still maintained a friendship after that and the Times would, on occasion, publish articles about what was going on in Bowman’s life.

But going back to 1969, then-editor Dick Hardwick wrote what may have been the first mention of Bowman in the tribal newspaper.

In his weekly column, Hardwick said Bowman is “an interesting study.”

“I’ve never met him but have talked to him on the telephone and he is an interesting person to talk to,” he said.

One of the things Hardwick liked about him, he said, is that Bowman says what he thinks.

Hardwick said back in January, Bowman sent him a list of New Year wishes and one of them was his “fervent hope that the present editor of the Navajo Times be replaced some time during the year.”

Hardwick had no problem with that, given the fact that he was on loan to the tribe from the BIA and he had been pushing to go back to back to his previous position, but the then-chairman of the tribe, Raymond Nakai, felt that it would be better to have a non-Indian run the paper during the election season to keep the paper honest.

In other news, the Times reported that Pete Riggs, a member of the Navajo Tribal Council and head of the Council’s Navajo-Hopi Negotiating Committee, had just returned from Washington, D.C., where he tried to get Congressional leaders interested in doing something about what he called the Tuba City-Moencopi problem.

The two communities, one populated almost solely by Navajos and the other almost solely by Hopis, were, in Riggs’ viewpoint, Ground Zero in the long-standing land dispute between the two tribes.

This had been in place since 1966 and Riggs wanted members of Congress to know how this was creating problems for both Navajo and Hopi families, who were having children and needed space to build more rooms to make up for the extra population.

“It’s not as if the families could move to a bigger house. That’s not the way things work out here,” he said when he returned.

He said he tried to make government officials understand that these were their ancestral homes and Navajos do not hop from one home to another like people do off the reservation.

Riggs was trying to convince Congressional leaders to relax the ban on development to allow families to add on to their homes if they wanted to but he said no one seemed to be anxious to hear about it.

“I think people are hoping that the land dispute just goes away,” he said.

The problem didn’t go away however, and the Times would eventually start writing articles about Navajo families that had grown from one to eight children and were still living in a two-bedroom house because of these restrictions.

And finally, Daylight Savings Time had begun the previous week and once again, Tuba City was facing the problem of operating on two time zones, one for the reservation and one for Arizona.

The Times reported that Henry’s Corner, a restaurant in Tuba City, was back to having two lunch periods, one at noon for tribal employees and the other at 1 p.m. for those in state offices.