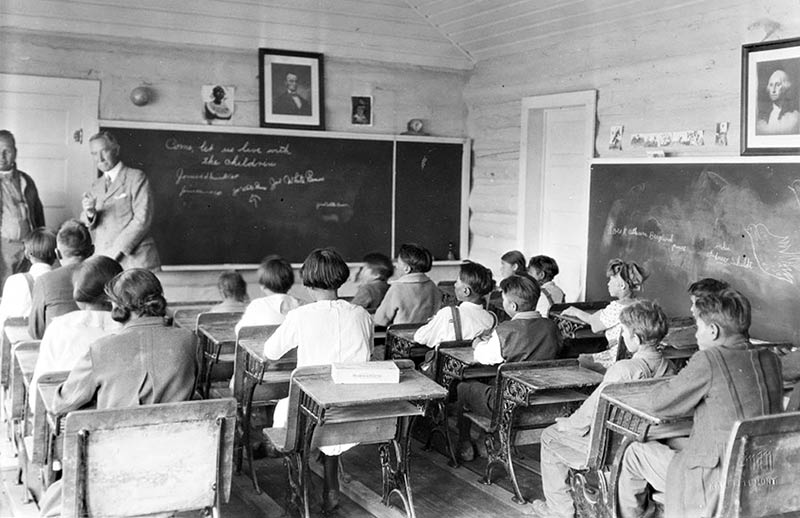 Submitted Starting in the 1880s, the U.S. Government routinely took Native American children from their parents and educated them in boarding schools, sometimes far from their homes.

The association said it was evident from the number of Navajo students having problems making it through their first year of college that the U.S. Bureau of Indian Affairs and public schools were not giving Navajo students a proper education. In 1970 this was obvious to anyone who looked at the stats. In the 1960s, less than 3% of Navajo students who went to college made it through to graduation and 60% didn’t even make it beyond the first year.

Nakai knew this and there had been times when he was a radio announcer and then chairman that he would go after the federal and state governments for their failure to provide students with a decent education. But this, he figured, was not the time or place to bring it up.

The reason was simple. One of his opponents in that year’s race for chairman was Sam Billison, who had been running for chairman for the past 12 years on the need for the tribe to take over education on the reservation. By placing the story on page 1 and then having an editorial supporting the idea, the paper appeared to be supporting Billison and trying to shame Nakai for not doing more on the subject.

But Billison felt that the tribe should use its power to require schools to provide more instruction in Navajo culture. Setting standards, in Billison’s opinion, was a no-brainer. Establish a task force of Navajo educators and experts on education and come up with a plan to gradually change the focus of schools on the reservation.

BIA schools had made major changes in the past 25 years. No boarding school was punishing students for speaking their native language, something that was a common practice in the 1930s and 1940s. But Billison wanted a tribal mandate that would require schools to teach Navajos who did not know their language to become fluent by the time they graduated.

He would often point to one public school that had a goal of having all first graders be able to count to 10 in Navajo by the end of the school year and know the Navajo words for the days of the week by the time they became third graders. That was not, he said, working to make them fluent in the language by the time they graduated.

Dick Hardwick, the editor of the Times, would later say this was just another example of Nakai trying to find a reason to criticize him and the paper as well as claim the tribal newspaper was biased against him.

In other news that week, there were reports that Nakai was telling police to clamp down on bootleggers and make a few arrests which they had no problem doing since every community on the reservation had at least one bootlegger and many had two or more. It wasn’t even a matter of trying to keep your bootlegging a secret from police since people arrested with liquor could be counted on to say where they got it. There was even one case where one of the biggest bootleggers on the reservation supposedly lived across from the police station.

At the request of Nakai, police made a few arrests for a couple of weeks and Nakai reportedly made a point of bringing this up at his rallies.

All of this, of course, came second-hand to the Times since police never released any reports to the press.

In fact, by April of 1970, Hardwick was hearing that Nakai could be counted on at every chapter meeting or rally to criticize the paper or tell his supporters they couldn’t trust anything they read in the Times. He accused the paper of putting in phony letters to the editor that were critical of him. He said he would often check with the chapter where the letter writer said he was from and find no one there had ever heard of him.

Hardwick would address this complaint occasionally in his column saying the paper did everything it could to make sure the writer actually existed but it was difficult when most reservation residents did not have a phone. It was easy to recognize some names, such as Ima Indian, as being fake but if someone really wanted to put a letter in the paper under a fake name, there were ways it could be done.

The paper also had to be careful, he said, of people calling in fake news by claiming they heard this or that candidate say something they couldn’t believe he said. The paper would then have to call the candidate or someone in his campaign, only to have the candidate deny saying it.