Warning: Invalid argument supplied for foreach() in /homepages/16/d210685788/htdocs/wp-content/plugins/leaky-paywall/include/class-restrictions.php on line 650
 50 Years Ago: Gorman underlines need to save culture for the future - Navajo Times

50 Years Ago: Gorman underlines need to save culture for the future

Carl Gorman, father of one of the best-known artists in the country, visited the Navajo Times and talked about his project to save the tribe’s cultural history to benefit future generations.

Gorman, one of the 29 original Navajo Code Talkers, had been living for the past couple of years in Davis, California, where he was a lecturer for the University of California. He said he made a pretty good living giving lectures on Native American culture but this only took him about nine hours a week so he had plenty of time to work on his project to preserve one aspect of Navajo culture – preserving Navajo legends.

He told Dick Hardwick, general editor of the Times, that his project has hit hard times due to a shortage of funding. He had received a $20,000 grant from the federal government and he hired a couple of assistants to help him interview Navajo medicine men and write down the legends that had passed down orally from their ancestors. 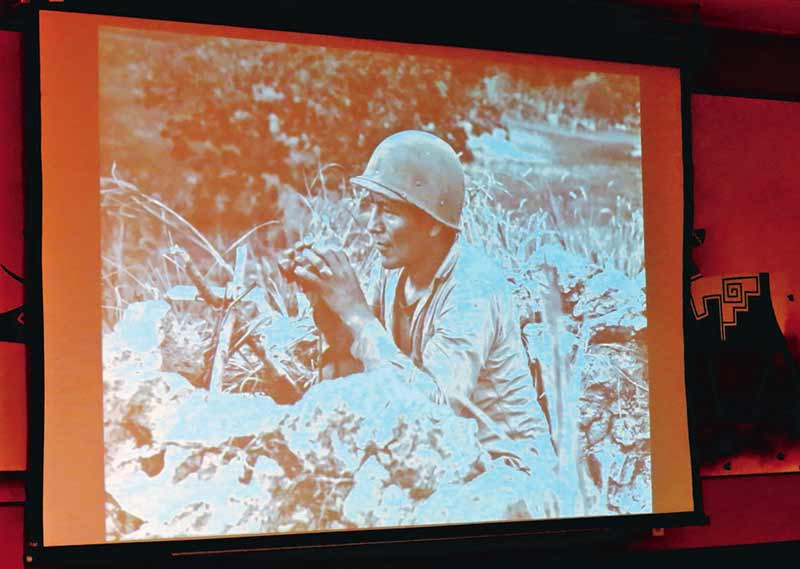 This archival photograph of Navajo Code Talker Carl Gorman is one of many Zonnie Gorman displayed during her Vet Day talk. (Special to the Times – Colleen Keane)

Gorman recognized the changes that were occurring on the reservation. Very few young Navajos were signing up to learn how to be medicine men, opting instead to get a regular job and a steady source of income. He told Hardwick that this may be the tribe’s last chance of saving the legends as many medicine men were dying without passing on their knowledge.

“We had just scratched the surface,” he said, pointing out that it had taken his group several months to win over the confidence of medicine men on the reservation.

Then, after only a few months of interviews, they found themselves running out of funds to conduct any more. He said in just those few months, he and his associates had discovered a treasure load of legends that had been passed on from one generation to another for hundreds of years. Stories that went to the heart of what made the Navajo people what they are today.

The hard part, he said, was translating the stories that were told in Navajo into the English language without losing the meaning. This was made even harder once Gorman realized the medicine men were not divulging everything they knew about the story.

Another problem encountered by Gorman was that medicine men, like their medical counterparts, tended to be specialists so that one branch would tell the legend a little differently than another medicine man. So Gorman had to go through the renditions and come up with a recounting that was the most accurate.

Oftentimes, he said, this required consulting other medicine men to make sure the version that was written down was an accurate recounting. But the problems didn’t end there. Once everyone agreed that the account was as accurate as they could accomplish, the debate began what to do with it. Gorman had been working for years on getting the tribe to fund the cost of building a cultural center either in Window Rock or Chinle.

He said there was some talk about turning over the manuscripts to the Navajo Tribal Museum to preserve but traditionalists opposed this because they did not want their legends “stored with the dead bones” in the museum. So for the present, he said, the manuscripts were placed on one of his desk drawers at his university office.

Another thing Gorman brought up during his talk with Hardwick was the fact that when he talked to tribal leaders about his problems, none of them seem to understand the need to interview the medicine men as soon as possible. He said this is also pointed out by the fact that while he does a lot of lectures on Native culture, the people who seem to be the most interested are non-Indians.

“We have a lot of tribes around Davis but very few members sign up to attend the lectures,” he said. One thing he also brought up was that a young man from the Hoopa Tribe near Davis attended one of his lectures during which he spoke briefly in Navajo.

The student came up to him and began speaking to him in his native language and Gorman said it as so similar to Navajo that he had no problem understanding him.

In a strong editorial in the Times, Hardwick pleaded with tribal officials not to ignore what Gorman was saying for it won’t be too long before these stories will be lost forever.

To bring this story up to date, for many years tribal officials ignored what Gorman was saying but in the 1980s, with the fact that medicine men were dying with no one replacing them, a general awakening occurred and tribal cultural officials as well as officials at Diné College started worrying that a lot of this knowledge would be lost forever.

Efforts began to save what was still available and a lot of elders and medicine men were interviewed and their stories were put on tape. Not too long thereafter, a similar project was begun to interview Navajo Code Talkers and get their accounts on tape as well.