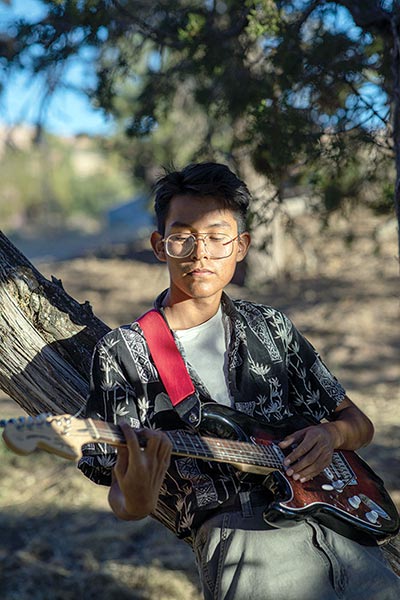 Hataałiinez Wheeler, 17, in his senior year at Navajo Preparatory School, is continuing the way his junior year ended: stuck at home because of the coronavirus.

But during this time he was able to write and record his second album, “Painting Portraits.”

The album has 12 songs and is a mix of instrumental and vocal tracks, where Wheeler sings in both Navajo and English. Wheeler also plays all the instruments on the record.

“I made the second record right when COVID hit,” said Wheeler. “I was thinking a number of different thoughts. For the most part it was ‘I miss my friends.’ But they were just random songs I came up with. Most of them weren’t that complicated to make.”

COVID-19 has altered and impacted everyone’s daily life, including Wheeler and his family.

Wheeler’s mom, Jennifer Jackson-Wheeler, said at the beginning of the pandemic her son and husband worked on building a hogan. She said after her son was done for the day he worked on his album.

“He’s always had a strong interest in music,” said Jackson-Wheeler. “To have him home in this pandemic situation it gave him that flexibility and additional time to focus on it.”

Within “Painting Portraits” instruments such as guitar, bass guitar, drums, and keyboard are all prominent, all of which Wheeler plays. He said his multi-instrumental abilities started when he learned the bass when he was middle school, and from then on he continued to learn other instruments but admits that he is a bit rusty on drums.

In some of his songs, like “Shima,” Wheeler sings in Navajo. Although not fluent, he said his mom helped out with that portion of his singing.

Initially he didn’t think he would incorporate Navajo into the album but at the time he was listening to Bossa Nova music and that inspired him.

“I was listening to a lot of Bossa Nova music and I thought that was pretty cool,” said Wheeler. “So I thought I would do that but with Navajo, and see how that turned out. It turned out pretty cool.”

The young musician said he has been listening to a lot of Pink Floyd lately but when he first started making music he was into Mac DeMarco. He also listed U2 as a band he’s always liked.

But it was his older brother that influenced him to learn how to play the guitar.

“I started playing instruments because my brother was really good on the guitar,” said Wheeler, of his older brother who now serves in the Army.

“It was pretty cool seeing him play the guitar and I wanted to do that,” he said. “I’m still learning guitar to this day.”

Based in Taos, New Mexico, a label called Psychic Sink heard “Painting Portraits” and was “blown away” by Wheeler’s compositions, voice and style and asked to help put out the album in vinyl.

“We were immediately impressed by Hataalii’s musical talents and merging of various genres, while maintaining his own spirit and energy throughout his songs,” said Lauren Green and Marissa Macias of Psychic Sink.

“It felt particularly special learning that he is only 17 years old and from the Navajo Nation,” they said. “We were especially interested in this album because it’s almost like a time capsule that reveals this major shift we have all been experiencing, through the landscape of this young musician’s perspective.”

They said the response to Wheeler’s music has been incredible and he is the first artist they are representing. Green and Macias have been curating art, performances and installations since August 2017 in Taos.

They also have a publication issue entitled “Elements,” which they design, write and print yearly.

“We often feature artists who maintain a level of mystery or obscurity, though that’s not always for long,” said Green and Macias. “We have had musicians perform with projections, collected images of altar spaces, and followed a rock collector as she gathered her found fossils and rocks – this is just a few examples of what we’re interested in, the tactile and sonic.”

Wheeler, who has never been to Taos, is excited for his album to come out on vinyl and his mom said they are looking to get the grandparents a record player so they can hear their grandson’s album.

“When I sit down and make a song I think, ‘Man, people aren’t going to like this song’ and I delete it. But that beats the whole purpose of doing it,” said Wheeler. “Now when I make a song, I think, ‘If people don’t like it, that’s OK.’”

Wheeler recorded the entire album on his own at his home and he also wanted to put on the record that his favorite breakfast is scrambled eggs with Hatch green chili on it along with hash browns and tortilla.