50 Years Ago: John Billy becomes face of the Navajo

For a brief period in 1970, John Billy of Steamboat became the face of the Navajo people to the American public.

Billy was chosen by General Dynamics, which was operating an electronic assembly plant in Fort Defiance, to represent the Navajo people in an advertisement the company created to show what the company was doing on the Navajo Reservation.

The ad, which ran in six national publications in early 1970, showed a head shot of Billy with this text underneath: The last thing he wants is a handout. 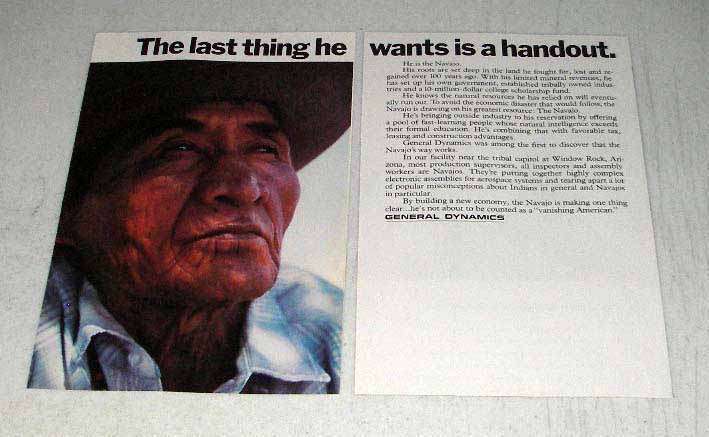 John Billy poses for a General Dynamics ad that appeared in 1970. (Image courtesy of bonanza.com)

The company hired a well-known French photographer to take the photo. He spent an entire day with Billy who was posed under a tree near the Steamboat Trading Post. Billy received the standard modeling fee of $75 an hour for his time.

In smaller lettering, the ad stated:

“He is the Navajo. His roots are set deep in the land he fought for, lost and then regained more than 100 years ago.

“With his limited mineral revenue, he has set up his own government, established tribally owned industries and a $10 million college education fund.

“He knows that the natural resources he relies on will eventually run out. To avoid the economic disaster that would follow, the Navajo is drawing on his greatest resource: the Navajo.

“He’s bringing outside industry to his reservation by offering a pool of fast-learning people whose natural intelligence exceeds their formal education. He’s combining that with favorable tax, leasing and construction advantages.

“General Dynamics was among the first to discover that the Navajo way works.

“In our facility near the tribe’s capitol in Window Rock, Ariz., most production supervisors, all inspectors and assembly workers are Navajo. They’re putting together highly complex electronic assemblies for aerospace systems and tearing apart a lot of popular misconceptions about Indians in general and Navajos in particular.

“By building a new economy, the Navajo is making one thing clear: he’s not to be counted as a ‘vanishing American.’”

The ad was probably seen by hundreds of thousands of people and was probably the best publicity the tribe had received in years. It came at a time when the tribe was spending a lot of money trying to get companies to set up business on the reservation.

Tribal officials had no knowledge of the company’s plans until the ads were in print and the overall response from tribal leaders was very positive. There were reports that Navajo Tribal Chairman Raymond Nakai was upset he wasn’t chosen to be the face of the Navajo but even he had to admit that Billy was a great deal more photogenic than he was.

But while the ad was a boost to the tribe, there is no indication that it resulted in more businesses coming to the reservation although it probably got some companies to consider the possibility.

The big news that week in the tribal government was the two-day visit by C.D. Ward to the reservation.

Ward was an administrative assistant to U.S. Vice President Spiro Agnew who had been convinced by officials for the National Congress of American Indians that he had to take a look at what was happening in Indian Country.

Since Agnew did not have the time himself to make the visit, he sent one of his most trusted advisers who was directed to make an assessment on how far Indian governments had gotten in their ability to govern themselves.

For Nakai, the visit was an opportunity to rant on his most public grievance against the federal government: that government officials created all of these programs to help the Navajo people without any input from the tribal government itself.

This gave him an opportunity to speak out against the creation of the Office of Navajo Economic Opportunity and its director, Peter MacDonald.

Nakai was upset that MacDonald had more power than he did in getting funding for services to low-income Navajos and the fact that he was getting more credit in the eyes of the general Navajo population for bringing this about.

He told Ward that this was creating a duplication of services with programs that existed at the time in the tribal government and as a result, federal dollars were being wasted.

But what Nakai actually wanted was the ability to control DNA, the federal legal aid program that the tribal government had been trying to shut down for years without any success.

When he left the reservation, Ward issued a press release saying he was impressed with the “fortitude and general sincerity” of the Navajo people, adding, “I can see why they are proud to live in their fantastically beautiful land.”

There is no record of what Ward told Agnew but whatever it was did not lead to the tribe getting any authority over ONEO at that time.

Four years later, however, President Richard Nixon did establish a program where tribal governments could take over most of the federal programs on their reservation.