Back in 1982, as Peter MacDonald was running for a fourth term as tribal chairman, he agreed to sit down with me and discuss some political issues. I think he must have been in a good mood since he didn’t put any restrictions on the questions, something he had been doing for the previous couple of years, probably at the suggestion of his wife, Wanda, who often said she didn’t like some of the articles I wrote about him.

“There’s a good Donovan and a bad Donovan,” she would say. “Which one is doing the interview today?” 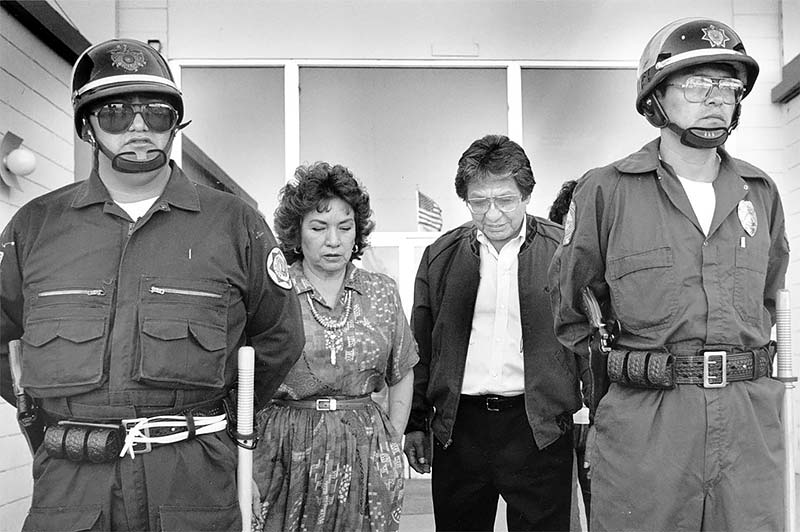 Navajo Times/Paul Natonabah
Navajo Nation President Peter MacDonald (1970-1989) walks away from one of his hearings with his wife, Wanda, guarded by Navajo Nation police.

As I remember this particular interview, MacDonald had come to the Window Rock Motor Inn for a meeting in one of the banquet rooms and they were still preparing the room so he was sitting at a table and suggested I sit down. Wanda was nowhere in sight so he was taking a big chance but he appeared to be in a good mood.

There had been reports that his administration was under investigation for something or other so this is what I wanted to talk about and he didn’t seem to be upset at the questioning, saying that this wouldn’t surprise him since he felt as if he had been under investigation for one thing or another from the day he became chairman. “And they have never found anything in all that time,” he said.

While it was true he had never been convicted of anything, he had been charged by a federal grand jury a few years before for allegedly taking bribes from a utility company seeking to get a permit from the tribe to build a transmission line across the reservation.

He actually went to trial on this in Phoenix and was represented by F. Lee Bailey, one of the most prominent defense attorneys of his day. When the jury failed to come to a decision, the judge dismissed the case, saying the prosecution had failed to prove that the money was not a campaign contribution.

But this brings us to what was going on 50 years ago and according to the Navajo Times, MacDonald was under investigation by a federal grand jury for the first time in his position as director of the Office of Navajo Economic Opportunity.

The investigation began a couple of years after MacDonald was named director of that agency and centered around allegations that MacDonald used agency funds and trainees to build a new home for his mother, Lucy Ute Bileen, in Teec Nos Pos, Arizona.

MacDonald denied any wrongdoing, telling the Times that the $10,000 used to build the house came from a life insurance policy held by his stepfather, Daniel Bileen, who had died about a year earlier. He said construction of the three-bedroom house was done by Martin Wener, who was director of the agency’s training program.

MacDonald said it was his understanding that Wener sublet the actual construction and that the materials used came from outside vendors. He stressed that when he approached Wener with the project, he made him guarantee that no agency funds or trainees be used.

Wener later told him that everything connected with the construction of the house was above board. Wener was the first of many wealthy men over the years who became good friends with MacDonald and went out of their way to help him with tribal projects. The two had met some years before and when Wener decided to retire, MacDonald convinced him to come and use his expertise by heading the agency’s training program.

A short time later, federal officials said the investigation had been concluded with no charges being filed. Also at the top of the news this week was a decision by a federal judge in a case filed by DNA against the Gallup Detention Center, citing inhumane treatment of detainees there by center staff.

When informed about what was going on, the U.S. District Court ordered that the center could not accept more than 60 detainees at any one time, which caused a problem since the center at the time of the ruling had an inmate population of 113.

However, instead of releasing 53 prisoners, the center decided to release everyone, which caused some concern since the temperatures at the time of the release — 5 p.m. — were already approaching 40 degrees and were expected to be below freezing that evening.

Gallup City officials gave a lot of dire warnings because of the closure but the Times reported everything turned out well. Several different groups, some with the tribe and some local, agreed to provide food and shelter to any who needed it and the Times reported that all of the people who were let out said they were treated a lot better than they would have been in the center. However, the Times said, there was no telling how long these organizations would be able to provide food and shelter so it was in everyone’s interest to get the situation cleared up as soon as possible.

The Times also said that organizers of the various groups that stepped up made an effort to get the city’s liquor dealers involved by asking for funds to buy food since they were a central reason why the situation occurred. To no one’s surprise, they declined to donate or get involved in any way.