Melissa Hill was just looking for a way to deal with the trauma she had witnessed and endured after participating in direct action protests all across the country and even more so after visiting Palestine. 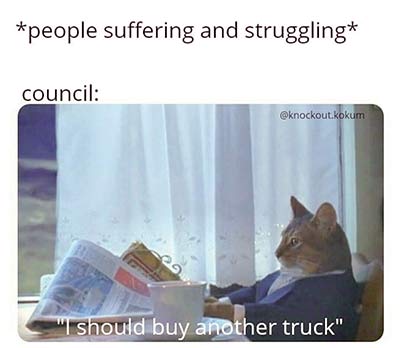 Courtesy photo
This meme critiques Native American governments and their elected officials who in the past have embezzled money from the people they’re supposed to be protecting.

A year ago, Melissa Hill participated in an Indigenous delegation that spent some time in Palestine, a country in the Middle East that has been battling occupation by Israel since Palestinians were displaced in 1946 to create the Jewish State.

The area has since become hyper-militarized with the Israeli military enforcing several checkpoints.

According to the Human Rights Watch, the “Israeli government continued to enforce severe and discriminatory restrictions on Palestinians’ human rights; restrict the movement of people and goods into and out of the Gaza Strip; and facilitate the unlawful transfer of Israeli citizens to settlements in the occupied West Bank.”

Hill saw firsthand the violence and trauma Palestinians face on a daily basis.

So like a lot of folks these days, she started sharing memes on her Instagram story that related to how she was feeling.

Memes are “a humorous image, video, piece of text, etc., that is copied (often with slight variations) and spread rapidly by Internet users,” according to Google Dictionary.

The humorous aspect being the defining characteristic of memes.

Memes exploded into a trend in 2012 according to Google Trends. Now, there exist meme pages on all social media platforms. One of those meme pages is @knockout.kokum, which Hill created.

Native humor has always been an outlet for Indian Country to create connection through shared trauma that was inflicted by western governments on Native people.

Vine Deloria Jr. in his book “Custer Died for Your Sins: An Indian Manifesto” stated, “Humor has come to occupy such a prominent place in national Indian affairs that any kind of movement is impossible without it. Tribes are being brought together by sharing humor of the past.

“Columbus jokes gain great sympathy among all tribes, yet there are no tribes extant who had anything to do with Columbus. But the fact of white invasion from which all tribes have suffered has created a common bond in relation to Columbus jokes that gives a solid feeling of unity and purpose to the tribes,” Deloria wrote.

Creating unity, or “bridges,” as Hill likes to say, is one of the reasons she created her meme page. Hill is from three different nations, Kumeyaay, Seneca, and Diné.

It’s important for her page to not only bridge communities here in the United States but across borders.

“My Seneca side lives on both sides of the border, Canada and United States, and then my Kumeyaay side down here in Southern California, where I grew up, we have a water well that is on the other side in Mexico,” she said.

“We were cut in half by the borders,” she said. “So (I’m) just continuously forcing that education that these borders are colonial constructs.”

Hill’s page is very political with a splash of good ol’ Rez life jokes. Her relatable content has garnered her an audience of nearly 5,000. She is most known for her “Sky Daddy” memes.
All jokes aside, Hill’s meme page and the Indigenous meme community has brought a lot of comfort into her life.

“What it brought to me is just a lot of joy, to be honest,” Hill said. “It’s brought me a new perspective on Indian Country. It’s brought me closer to my already close friends. We’re able to talk about memes and just be like, ‘Man, that one really got me.’”

Memes have also become a space for her to debrief on the experiences she’s gone through as an Indigenous activist.

Hill grew up in Southern California on the Viejas Reservation, a Kumeyaay community. Growing up on her homelands, Hill learned a lot about Bird culture, as the Kumeyaay call their way of life.

The Kumeyaay have a wealth of knowledge in their Bird songs which Hill grew up knowing. Hill even speaks her language and is currently working on language revitalization in her community.

“My teacher is Stanley Rodriguez and he taught me the language,” she said. “(I’ve been) learning it since I was 17, so coming up on eight, seven years.”

Hill would also come to Navajo to visit her family on this side in Tohatchi, New Mexico. Her Kumeyaay and Diné cultures were quite different but she enjoyed learning about both growing up.

She went to college and dropped out twice, once to stay at Standing Rock during the NoDAPL movement. Since then, she’s traveled all across the world doing decolonizing work and creating bridges between Indigenous communities from Indonesia to Palestine.

She sees her memes, her artwork really, as a way to continue doing decolonizing work as she takes a step back from direct actions to focus on her healing.

“I’m still visible on the frontline through my art,” she said.

Though she still has a difficult time thinking of herself as an artist.

“I’m finding it hard to swallow myself that I’m an artist but that’s just my own trauma,” Hill said.

Hill isn’t the only Indigneous memer, there’s @rezzyproletariatmemes, @emo_ndngirl666 and @diyinmemeniliinii, just to name a few.

Indigenous memers are growing in number and many share at least one political meme.

Hill has also been playing with the idea of creating T-shirts but is trying to figure out how she can make them without adding to the pollution of Mother Earth.

“My friend and I are thinking about buying thrifted clothes and hand painting on them and selling that or something like that,” she said. “Trying to get away from this capitalist everything, it’s driving me crazy. It’s riding that fine line of what’s right in your heart and what’s right for Mother Earth.”

Hill is intentional in everything she does and this can be seen in all areas of her life including her meme page.