Mine, plant workers plea for jobs at PRC hearing 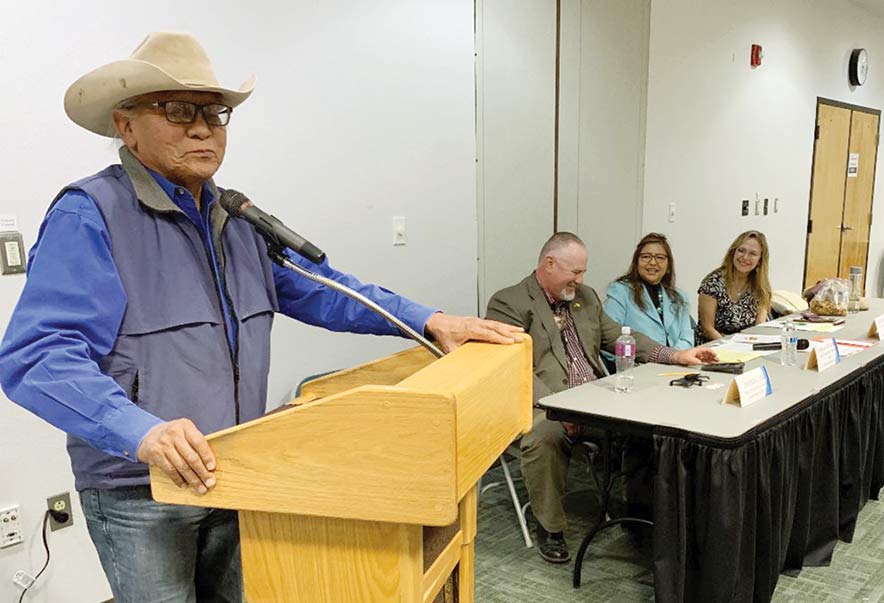 Navajo Times | Cindy Yurth
Navajo Nation Council Delegate Daniel Tso gets a rare laugh from the Public Regulation Commission as he testifies at a meeting on the San Juan Generating Station Monday in Farmington.

At its closest hearing yet to the San Juan Generating Station, the New Mexico Public Regulation Commission on Monday got an earful from nearly three dozen employees of the threatened plant and its accompanying coal mine, who pleaded with the PRC to keep it open.

Equally passionate pleas came from a smaller contingent of young Diné environmentalists to allow majority owner PNM to abandon the coal-fired plant, but hold the company responsible for its cleanup. Only two people — both local Navajo chapter presidents — spoke in favor of the recently passed Energy Transition Act, which would help PNM divest from the plant and earmark funds for displaced workers and impacted communities.

But Norman Begaye, president of Nenahnezad Chapter, said he would support keeping the plant open as a “backup plan.” The mine and plant workers who spoke at the hearing, which was held in Farmington at the suggestion of PRC Chairwoman Theresa Becenti-Aguilar, universally supported a proposal by Enchant Energy Corp. to take over the plant and fit it with carbon capture technology.

The retrofit would remove the carbon dioxide from the emissions and sell it as a separate commodity. CO2 can be used in oil and gas production and also in greenhouse plant production.

Opponents, including PNM and the Sierra Club, argue that large-scale carbon capture is still in the experimental stages and the retrofit would be so horrendously expensive that consumers would see their electric bills skyrocket for decades to come.

Enchant has said it can cut costs by repurposing components of the plant and its plan is technologically and economically feasible.

PNM wants to close the plant — which was built in the 1970s and was designed to last until 2053 — in 2022 and replace it with natural gas and renewable energy.

Arbin Trujillo, CEO of Four Corners Economic Development, told the commission closing the plant and mine would take away about 1,500 well paying jobs including those in supporting industries. “It would be the equivalent (impact) of losing Intel on Rio Rancho,” he said. “(The plant) built a middle class where there was no middle class before.”

While the ETA would require PNM to put some funds toward retraining both plant and mine personnel, many of the miners said they enjoy their work and don’t want to do something else. “We’re 40, 50, 60 years old,” said miner Safford Denet. “It’s going to be hard to train for another job.”

“Yeah, we’ll be able to find another job,” added miner Jerry Benally, “but it’s going to be seven to 10 dollars an hour. I’m making three times that.”

Miners and their family members also said they didn’t want to uproot their families or leave them to look for work elsewhere.

Perhaps the most impacted entity if PNM pulls out would be the Central Consolidated School District, which relies on the mine and the plant for about 80 percent of its property tax revenue, according to acting superintendent Dave Goldtooth. Most of the school district lies on the Navajo Nation, where people don’t own land or pay property tax, a mainstay of public education. Goldtooth said the district currently has $37 million in outstanding bonds secured by property tax revenue.

The only way to replace the loss of the taxes paid by the mine and plant would be a huge mill levy increase on the people of Kirtland, the only incorporated municipality in the district — and with the miners moving out and possibly allowing the banks to foreclose on their homes, that will diminish the number of taxpayers supporting the district even more, Goldtooth pointed out.

The student population will also decrease significantly as the displaced miners relocate their families, he noted, and since many of the district’s teachers are married to miners, the district could face a teacher shortage as well. “CCSD is encouraged by the Enchant proposal,” Goldtooth told the commission, adding, “It is up to people such as us” to determine the future.

The ETA does require PNM to try to locate its new development within CCSD’s boundaries, but Goldtooth said he wasn’t counting on that.

Eugene Schmidt, superintendent of Farmington Municipal Schools, echoed some of Goldtooth’s concerns, although his district will not be as severely impacted as CCSD. Schmidt also noted that a parent’s job loss has a huge psychological impact on children and they don’t always come to school prepared to learn.

Several speakers said they weren’t bothered by the fact the carbon capture technology proposed by Enchant is unproven on a large scale and found it “exciting” that New Mexico could be on the cutting edge. While America is turning away from coal, that’s not the case with the rest of the world, noted one Farmington resident.

“If we don’t show them another, cleaner way to burn coal, we’ve done nothing,” he argued.

But a group of young environmentalists from the Shiprock area said they wouldn’t mourn the loss of the SJGS, and would rather deal with the economic fallout than continued environmental degradation from the plant’s smokestacks and ash pits.

Makai Lewis said the group had conducted a survey of people living in communities within a 100-mile radius of the plant and found only 13 percent felt the impact of the generating station was positive. Sixty-one percent said they or someone they know had experienced health issues they believe resulted from living close to the plant.

The group wants the plant shut down, but not according to the provisions of the ETA, which Jeneva Ben described as “a sick version of a Get Out (of Jail) Free card.” Ben noted that while the ETA would require PNM to spend $12.1 million on helping displaced workers, only $1.8 million is earmarked to remediate the water and land.

Several SJGS employees argued there is no evidence ash pits at the plant are leaching into the aquifer.

Navajo Nation Council Delegate Daniel Tso backed up the young environmentalists. “I implore the Public Regulation Commission to require the Environment Department to do an independent assessment” of the plant’s environmental effects, he said. “PNM can’t just walk away and continue to raise the rates.”

Of PNM’s plans to possibly replace the plant with a solar array located on the Navajo Nation, Tso said several of the chapters he represents in Eastern Agency are looking into establishing their own solar arrays and he feared the PNM solar plant would compete with them.

“PNM, I feel like you’ve taken as much of the energy resources as you’re going to take,” he said.

While the commissioners wouldn’t reveal which way they’re leaning at this point, they agreed it was a good thing to hold the meeting at San Juan Community College in Farmington, a place that’s more accessible to the people who will be directly affected by their decision. (The SJGS is in Waterflow, New Mexico. Previous hearings on the issue were held in Santa Fe.)

“The most important thing is you had a chance to walk into your own building and voice your opinion,” Becenti-Aguilar said, noting that all the comments would be transcribed by a court reporter and attached to the record.

Added commission Vice Chairwoman Valerie Espinoza, “I listened with my heart, and it was a tough one.”

The only other member of the five-person commission present at the meeting was Jefferson L. Byrd, who responded to a speaker’s observation that the commissioners appeared to be stone-faced and not reacting to comments. “We do hear you,” he said. “We have no expression because we’re a judge. We are concerned and that’s why we want to hear from you.”

The PRC is accepting written comments on proposed SJGS closure as well.