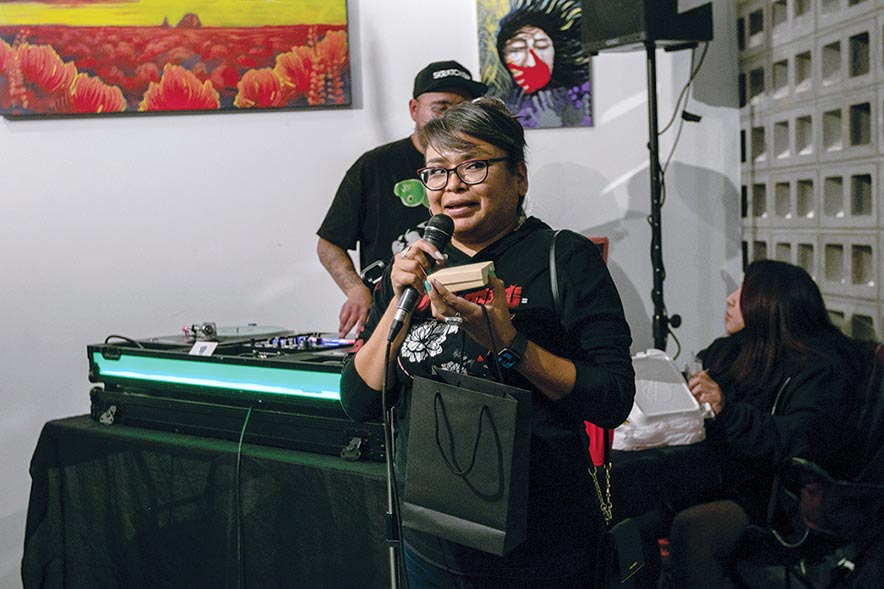 Cahokia touts itself as the first modern Indigenous art and social space owned by women.

Nestled in the heart of downtown Phoenix, it hopes to embody the spirit of a pre-colonial city known for the community, creativity, and the free exchange of ideas.

Co-founders Melody Lewis and Eunique Yazzie were inspired by ancient Cahokia, an Indigenous city of 15,000 in the Mississippi Valley in what is now Illinois.

They want their space to foster “creative placekeeping” for Native American art and culture.

“We called this place Cahokia because we want it to be the modern-day version of that space, where Indigenous communities and people come together to create and innovate,” Lewis said. “And so that’s how it all came to be – through our exchange in knowledge, skills, and abilities when we first started.”

Cahokia is a for-profit social enterprise hub for Indigenous and marginalized creatives and entrepreneurs to host events, sell products, showcase and sell their artwork and collaborate on various projects.

Since the grand opening, Cahokia has brought in more artists and gotten more media coverage than expected, which has been exciting for the founders.

“We have blown up more than we ever thought we would,” Yazzie said. “We’ve had people trying to pitch us projects that are huge in scale because nobody’s ever seen a completely Indigenous creative team operating like how we do and how we throw things together.”

Lewis said the startup’s notoriety could also be attributed to Cahokia being the first of its kind: a community space made for and led by Indigenous people.

“It’s super exciting to be able to have a space to do the work that makes sense to us, that feels like home,” she said. “A space that is not institutionalized, that sees through our lenses, and our worldview just hasn’t existed until now.”

Cahokia has 15 member creatives as well as more than 30 volunteers. To foster a sense of family, all are part of the decision-making process in event planning and meeting community needs.

Adan Madrigal, a motivational speaker and a videographer, who’s not Native American, said he had explored his own cultural identity since joining Cahokia because of the social enterprise’s strong sense of community.

“I come here sometimes and see there’s no one here, so I leave and go back to the office because I’m not coming here for the space,” Madrigal said.

“That’s where optimism is – it’s with the people,” he said. “Cahokia is teaching people how to take ideas and turn them into tangible things through action.”

Lewis said having a dedicated space to be surrounded by other Indigenous people has allowed her to take what she’s learned about her culture and “really feel it.”

“A place has never really existed where we could just be ourselves,” Yazzie said. “And even though you don’t know all of your culture, you’re still Native. You still have stories, and you still have family that ties you to the land.

“So, it’s almost like we needed a place to be able to speak to each other,” she said, “to share these similarities, the hardships, and to share the laughter and the joy.”

Cahokia focuses on gathering more support and investment for the space, with goals of supporting 1,000 creatives and entrepreneurs over the next three years, participating in advocacy for Native people, and eventually buying a property to house Cahokia than renting.

“We want to be able to grow into a sustainable idea and concept so that we can move past just functioning year-to-year to where we have enough funding for us to continue to do programming to cultivate more individuals,” Lewis said. “And on top of that, we want to open more spaces like this in different locations.”

Cahokia is open from 9 a.m. to 4 p.m. Mondays through Fridays.