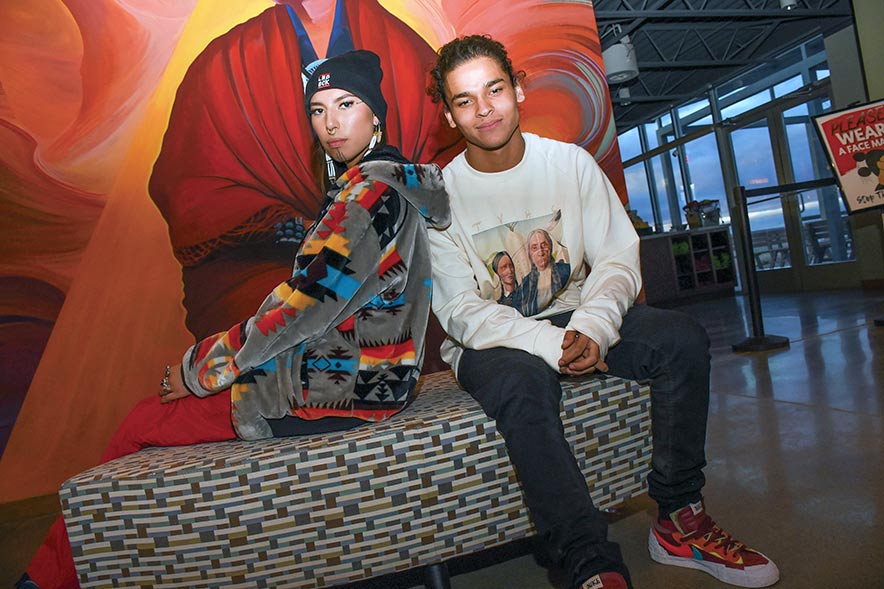 Navajo Times | Krista Allen
Native model Quannah Rose ChasingHorse Potts and actor D’Pharaoh Woon-A-Tai visit Dixie’s Lower Antelope Canyon Tours in LeChee, Ariz., on Dec. 30, 2021. The model and actor, respectively, are representing Indigenous people and lands on the red carpet and on the big screen. ChasingHorse was born in Tuba City on June 6, 2002. She resides in Fairbanks, Alaska, while Woon-A-Tai, known for his role in “Reservation Dogs,” resides in Toronto.

Her daughter, Quannah Rose ChasingHorse Potts, almost made her debut to the world in the front-passenger seat of Sharon Watson’s vehicle.

When Jody Potts-Joseph went into labor with Quannah in early June 2002, her friend, Watson, offered to drive her from Flagstaff to Tuba City Regional Health Care in Tónaneesdizí.

Potts-Joseph and Watson at the time were students at Northern Arizona University.

Potts-Joseph said if she didn’t make it to the hospital, her daughter would have been born on U.S. Route 89 in Na’ní’á Hasání.

“Cameron!” Potts-Joseph exclaimed. “She was almost born in Cameron. It was really close, and I just made it to the hospital and a short time later, had her.

“Sharon was so good! And it was summer because (Quannah) was born June 6,” she said. “So, there were lots of … trucks with boats going up the road, a lot of RVs. It was slow traffic, and she (Watson) is such a champ. She’s like a NASCAR potential driver.”

Watson is Diné. She’s a member of support staff at Page Middle School in Dá’deestł’in Hótsaa.

While they were here, they rode horses and took a slot canyon tour with Dixie’s Lower Antelope Canyon Tours, where Quannah and D’Pharaoh spent time signing autographs and posing for photos with their Western Diné fans.

They also visited the Kayenta and Chinle areas and attended a meet-and-greet at Chinle Chapter House.

Some may not have heard of ChasingHorse and Woon-A-Tai until early fall and late summer, respectively, last year.

The young duo’s – who met in 2021 at New York Fashion Week – rise to stardom seems to have happened overnight, with ChasingHorse’s appearance at the Met Gala and Woon-A-Tai’s role as Bear Smallhill in the FX on Hulu comedy-drama series “Reservation Dogs.”

Woon-A-Tai portrays an Indigenous teenager who longs to flee his homeland in rural Oklahoma searching for bigger and better opportunities.

And ChasingHorse is a rising fashion model redefining beauty.

“I’ve been doing a lot of advocacies, Indigenous sovereignty, MMIW, and climate justice, and so on,” ChasingHorse said. “I kind of grew my platform doing that.

“A lot of people started noticing and a casting agent reached out to me and said she’s casting for Calvin Klein,” she said, “and it was around voting … last year. It was a really big campaign for them.”

ChasingHorse said that campaign worked out perfectly because she was working with Native Vote at the time, and both projects were successful.

“As soon as that (Calvin Klein) campaign came out, I had agencies that reached out to me, and I signed with IMG (Models) shortly after,” she added. “That was really cool.”

Since then, she fronted a special digital issue of Elle and Net-a Porter’s digital title “Porter” magazines.

Woon-A-Tai said the second season of “Reservation Dogs” will start filming in March 2022.

He doesn’t detail on what happens after the show’s character Elora (portrayed by Devery Jacobs) escapes and starts driving west with Jackie (portrayed by Elva Guerra) in Season 1.

For ChasingHorse and Woon-A-Tai, they need to reflect their Indigenous culture.

They are breaking barriers and stereotypes of Natives and speaking with wisdom from their homelands and people. They said several times a day can be draining.

ChasingHorse is Hän Gwich’in and Sičangu/Oglala Lakota. She is of the Raven Clan.

She’s a fighter for her culture and the land her people lived on for thousands of years.

Woon-A-Tai is of the Beaver Clan.

Both ChasingHorse and Woon-A-Tai hope to use their growing platform to show that Indigenous representation deserves to be more than a moment in the public eye.

“Sometimes I feel overwhelmed because I think about all the people that really look up to me,” ChasingHorse said. “I don’t want to disappoint anyone. I don’t want to be a hypocrite.

“Sometimes I can feel disheartened by certain things,” she added. “For me, without my people and my ancestors, my values and the guidance from our culture and traditions, … without that, I wouldn’t be where I’m at.”

ChasingHorse and Woon-A-Tai hope that in the future, up-and-coming Indigenous models, actors and actresses don’t have to break barriers or have exhausting conversations and correct myths and misconceptions. They hope they do not experience moments where they feel lonely in a room full of non-Natives.

“That’s honestly the main reason why I continue to do it,” ChasingHorse added, “remembering what it’s for.

“It’s not just for me,” she said. “It’s for my whole community, my Indigenous community. Representation is so important. And the lack of representation is really taking a toll on our people.”

Woon-A-Tai said, “When we say there hasn’t been no representation, there has – it’s just been really bad. We’ve just been shot off of horses and having our tepees getting burned down, that’s what people see us as.”

ChasingHorse said that’s one of the many stereotypes of Natives in places like New York City.

“They try to fit us in the stereotypical box that we don’t fit in,” she said. “We just don’t!”

Potts-Joseph said traveling with her daughter and watching her and Woon-A-Tai at events in big cities, she noticed the two get a lot of questions about their Native background, including her daughter’s Yidįįłtoo, or face tattoos, hand-poked by her mother.

“Some people say, ‘It’s not that we’ve never worked with a Native American model before, we’ve never actually met one,’” Potts-Joseph explained.

“So, sometimes it makes me wonder if some people think we’re (Natives) kind of extinct,” she said. “And here, these two come, they’re creating greater visibility.”

ChasingHorse added that it is a lot of pressure for her and Woon-A-Tai to correct myths and misconceptions while working.

“What I think ‘Reservation Dogs’ did such an amazing job with is that they (writers) showed Indigenous people doing all forms of jobs, which kind of normalizes us instead of just being … which they make fun of is the spirit (portrayed by Dallas Goldtooth) on the horse,” Woon-A-Tai said.

“That was like poking fun of the film industry,” he said, “and at ourselves a little.”

Even though Quannah and her mother aren’t Diné, they grew up with Diné and have Diné friends, many of whom they call family like former Miss Navajo Nation Jocelyn Billy-Upshaw, who has been in Quannah’s life for nearly 20 years.

Potts-Joseph said Billy-Upshaw is her sister and they met at NAU.

“My kids really look up to her as one of their aunties,” she explained. “My kids feel really close to their Navajo family.”

Billy-Upshaw, before the Met Gala, fashion’s biggest night on Sept. 13, 2021, traveled to New York City to accommodate ChasingHorse with her dootł’izhí and béésh łigaii that she would wear on the red carpet.

The dress’s billowing cape gave the illusion that ChasingHorse had wings.

“The stylist that was working with Quannah for the Met Gala, we were talking Indigenous jewelry with that dress and what would look good,” Potts-Joseph explained. “When (I) was asked if I knew any people who could make turquoise jewelry, I said, ‘Well, I can do better than that. I know the best Miss Navajo Nation ever.’

“Jocelyn’s always been there for us,” she said. “It was just a powerful special moment.”

She added, “It felt really good for Quannah to honor her connection (to the Navajo Nation) even though she’s not Navajo by blood. She’s born on the Navajo Nation. My in-laws from Kayenta-Monument Valley have always treated my kids like their own.”

“It’s good to be back on Navajo Nation,” Potts-Joseph said. “It’s so beautiful, and it’s such a good feeling in my heart.”

Quannah, which means “fragrant” or “sweet-smelling,” was named after Quanah Parker, a Comanche leader and the last chief of the Kwahadi band.