From selling breakfast burritos with his siblings and parents in Shiprock four years ago, to working in front and behind the camera, Kody Dayish, 33, filmmaker and actor from Sanostee, New Mexico, started working on small film projects. In 2016, he created a team with his sister, Kolette Dayish, as production manager, and brother Kolin Dayish, as assistant director and screen writer. 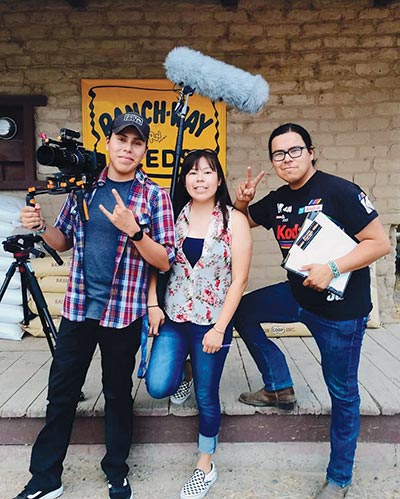 The collaborative trio embarked on a journey to produce short films with the money they saved from selling breakfast burritos.

Their goal was to get Navajo talent recognized through their short films featured on Facebook and Youtube.

“We have seen projects happen through Hollywood that involve Native stories,” Kody Dayish said on July 29, “but they don’t actually cast Native Americans.”

The exposure to filmmaking and participating in auditions came at an early age for the Dayish siblings. They watched their parents for the past 20 years help families experience the spotlight through the Shiprock Fair’s baby pageant.

The first success for the siblings came when a young boy name Xavier Horsechief took a speaking role for one of their short films. He impressed the siblings, so they referred him to the casting call for the movie “Hostiles.”

Horsechief got the role and worked on the film with Wes Studi and Christian Bale.

“Since then we’ve been really trying to help the Navajo people get involved in film,” said Kody.

Recently, a request was sent to the Dayish siblings by Hollywood Production to find Navajo-speaking actors for a huge movie project taking place in New Mexico.

They did not hesitate and will take their first huge step as talent management company.

“We just want more people involved,” Kody said, “because we know a lot of people are looking for jobs — and we just really want to help, and volunteer our time to try to push people to get in there, and give them a chance, to see what it is like, because we like what we experienced a lot.”

KDayish Siblings Navajo Talent Management hosted their first casting call for Hollywood Production on Saturday, July 31, at the Howard Johnson at the Wyndham in Gallup, from 3 p.m. to 6 p.m.

“We are volunteering our time to put on a casting call, to help local Navajo people land speaking roles, and to work with some pretty famous actors.” Said Kody.

Updates on future casting calls can be found on their Kody Dayish Productions Facebook page.