Growing up in the heart of New Mexico has clearly been an important piece of Justin Yazzie’s identity and, by extension, his art. Yazzie grew up in “Burque” near the Rio Grande River and the intersection of I-40 and I-25. The cottonwood trees and sandhill cranes have always been in the background of his life story.

In the shadow of the Sandia Mountains, Yazzie graduated from the University of New Mexico with a degree in architecture. He met his wife in Albuquerque and they created their home there. “If and when I move, I will probably still do New Mexico,” he said. 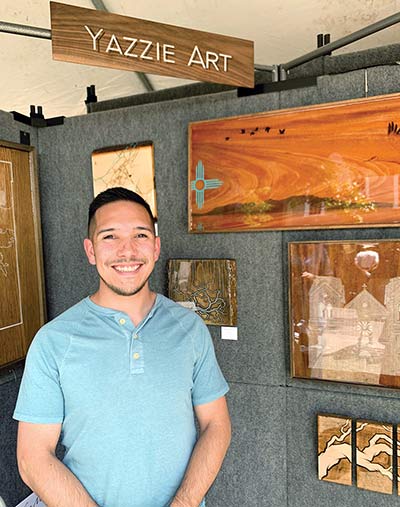 Navajo Times | Pauly Denetclaw
Justin Yazzie uses his art to explore his identity as a New Mexican and a Navajo citizen who grew up in an urban area. He describes his work as New Mexican art.

His work is a mixture of wood burning, resin and iconic New Mexican imagery. One piece is of the street layout of Albuquerque and another is of the state outline of New Mexico. While Yazzie’s art lacks the signature bright colors of New Mexican folk art, as his pieces usually focus on the natural color of the wood and some flecks of gold, his work is clearly influenced by it.

Although Yazzie describes his work as contemporary New Mexican art, he also brings a refreshing new perspective to the world of Native American art. A lot of Native artists are influenced by their indigeneity but Yazzie’s art brings a whole new look to what it means to be Nuevo Mexicano and Indigenous. “I’m just trying to create what home is for me,” Yazzie said. “Creating that sense of identity for myself through my art is interesting because others see it differently.”

He takes inspiration from the built and natural worlds to create his art. Yazzie has been an artist his whole life but over the last few years has taken it more seriously. “Working on wood, I did as a kid,” Yazzie said. “I love working on wood mainly because each piece is different.” His process begins with the search for a piece of wood to use. Then, he takes into consideration the unique aspects of each piece of wood and listens.

“I usually let the wood tell me what it’s going to be,” Yazzie said. “It’s kind of a back and forth process.” Recently Yazzie has been creating a lot of pieces with sandhill cranes to represent his wife who is from Socorro. The small town located in the Rio Grande Valley is home to the annual “Festival of the Cranes.”

“We’re creating our family and her sense of home is a little bit different than mine,” he said. In the past, he focused more on roadrunners, which are New Mexico’s state bird and can be found running all over Albuquerque. Yazzie loves being an artist because “like the wood, it’s different every day.”