Kodee Artis grew up on the rez in Iyanbito, New Mexico, watching films like “Lord of the Rings” and “Conan the Barbarian.”

The films had one thing in common – the forging of swords. As little kids, this is what inspired Artis and his cousins to try forging their own knives and swords. 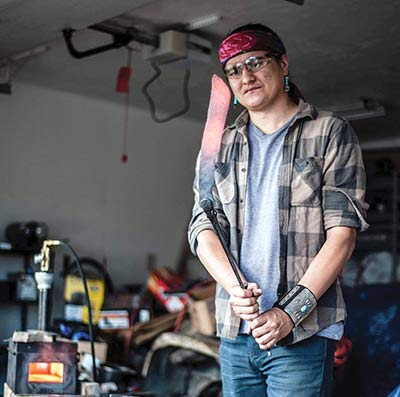 Kodee Artis, 26, is best known for his short comedy skits with Bony War Pony Productions and the memes using his image that are shared across Navajo Facebook. However, Artis does more than make people laugh. He is also a bladesmith and was invited to compete on the History Channel’s “Forged in Fire.”

“I’m also Norwegian, so it’s in my blood,” Artis said with a laugh. This was his only experience until a year and a half ago when he decided to forge a knife for the first time as an adult.

Artis was going through a really tough time and was out in the forest with his father when he realized he could make his own forge out of the materials his father had around the house. That was the beginning of his adventure into the art of forging metal. “I made a rezzy charcoal forge made out of an old barbecue grill and that’s how I started bladesmithing,” said Artis, who is Nihoobáanii born for Bilagaana. His first blade was made out of a horseshoe using a two-dollar hammer, a pair of tongs he bought with his tuition refund during undergrad and an old railroad track as an anvil.

This was the set-up he used for a long time. Dozens of knives later, Artis ended up in a place he never expected. Artis was a competitor on the History Channel’s “Forged in Fire” television show, which aired yesterday. The competition show tests the skills of bladesmiths from across the country to make a blade from scratch in three hours. The second round entails constructing a handle in two hours. The third and final round tasks competitors with recreating a historical weapon in five days. The winner receives $10,000. Artis had been watching the show for some time before he was selected to compete.

So, he flew to Connecticut to compete against bladesmiths that have been doing it for years and years. “Before the show I never forge-welded; it was way out of my skill level,” Artis said. “It was my first time ever touching a power hammer or having a 20-ton press. I think it was kind of overwhelming because I didn’t know how to do any of that. I’ve never seen any of these power tools. Even my anvil was super fancy.” Nonetheless, Artis tried his best and in the process gained some more bladesmithing skills. “The kicker was I had to learn all of this within three hours and at the same time make a blade,” he said. “It was definitely a game-changer and expanded my abilities.”

He left the show with mixed feelings and definitely thought he could have done better. “I understood that I was a beginning bladesmith,” Artis said. “I’m still a toddler basically and it showed me where I can be in five to 10 years and what I can have. I was more inspired but at the same time I was like my performance was disgraceful.”

Artis is the second Navajo citizen to compete on the show. The first was Atsatsa Antonio. “Shout-out to him because he did really well and when I saw him on ‘Forged and Fire’ I was, like, ‘What?! There’s a Navajo on there?’” Artis said. “It urged me to just say, ‘Let’s go and let’s try it.’” Artis is currently a law student at the University of Idaho studying Native American and environmental law. He is most well known for the memes made from his photos and videos he makes with Bony War Pony Production. Artis also takes orders for knives.