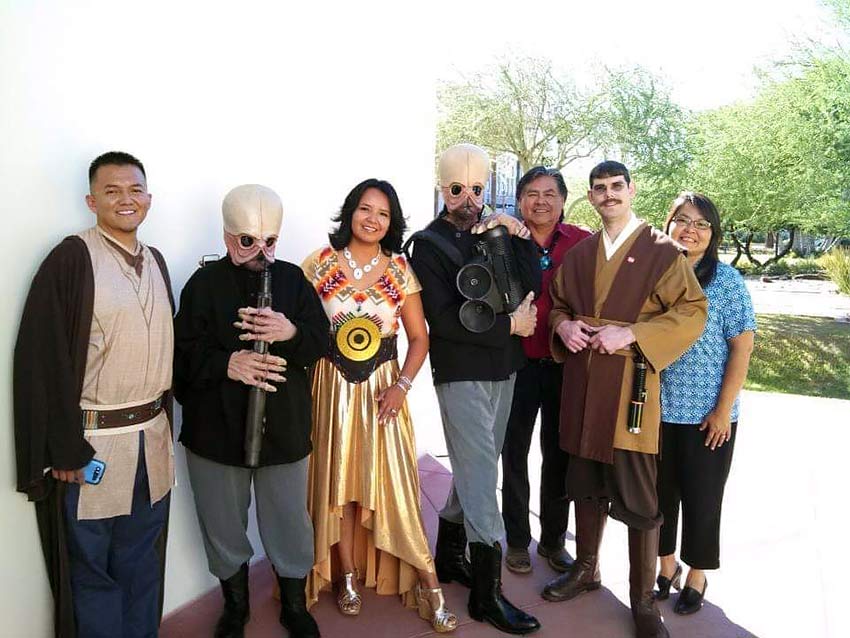 Cast members who dubbed the entire Star Wars movie into Navajo will be honored at the 2018 Indigenous Comic Con on Saturday.

According to an email from ICC organizer, Faith Toledo, Dewback Ridge Garrison, a New Mexico chapter of the 501st Legion, a costume charity group, will honor the seven main Navajo actors who used their Navajo speaking abilities to voice over the original 1977 movie at 2 p.m. after the Navajo dubbed version is shown.

Terry Teller, who played Luke Skywalker, said on Friday he was “proud” to have been part of the project.

“…Anything that will advance our language,” Teller wrote in a Facebook email on Friday. “Being a part of any other related events like Indigenous Comic Con is an added bonus.”
Teller and other Navajo actors who contributed their language, will be inducted as honorary 501st Legion members.

Hongeva said she was also honored to have contributed to preserving the Navajo language, as well as, having been chosen out of hundreds of other actors to be the voice of the iconic character.

“I’m honored to be invited to the 3rd annual indigenous comic con,” Hongeva said. “I’ve attended with my kids the first year, this year it’s more special to be invited to be inducted into 501st Legion in New Mexico chapter. So many people made this film possible.

The Navajo version of the movie first debuted on July 3, 2013, during the Fourth of July Celebration Fair & PRCA Rodeo at the Navajo Nation fairgrounds in Window Rock. A year later a limited supply of the movie was released on DVD, in addition, to the Star Wars Pendleton blanket.

Manuelito Wheeler, Director of the Navajo Nation Museum, said in a 2013 interview, the museum and Navajo Parks and Recreation Department collaborated with Lucasfilm and Fox Studios to make the DVDs available.

The movie was shown throughout the country where it was received well, said Hongeva.

This year’s comic con will be held at the Isleta Casino and Resort, which is south of Albuquerque off of Interstate 25.

The ICC begins today and ends on Saturday. For more about the comic con, go to .