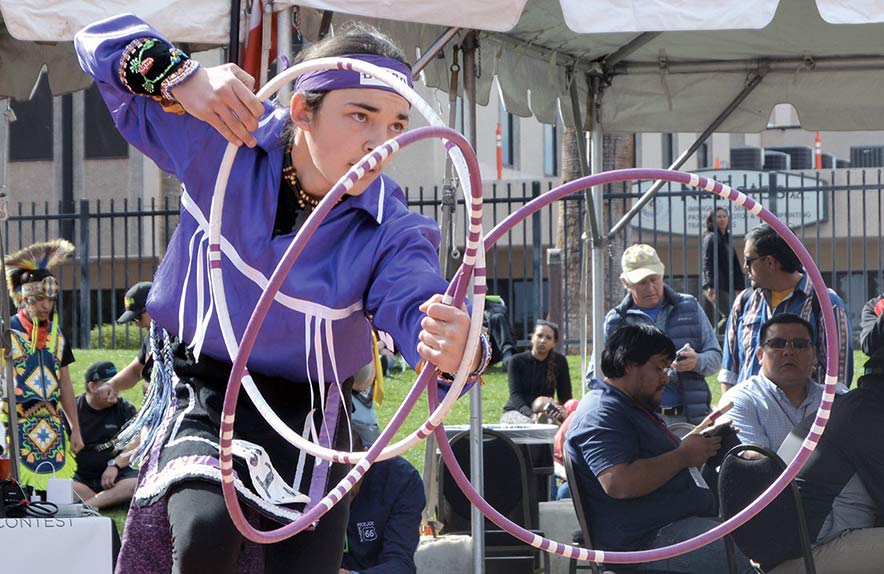 Special to the Times | Candace Begody
Josiah Enrquez, Pueblo of Pojoaque, imitates a bow and arrow during the second round of the teen division at the 30th annual World Championship Hoop Dance Contest on Sunday in Phoenix at the Heard Museum.

Scott Sixkiller-Sinquah, Gila River Pima/Hopi, of Phoenix, earned 230 points out of a possible 250 to win his first adult world title at the 30th Annual World Championship Hoop Dance Contest on Feb. 8 and 9 at the Heard Museum.

Sixkiller earned a spot in the finals after two preliminary rounds of competitions and took home the grand title and $4,000. Sixkiller faced 22 of the best hoop dancers in his division including past champions Dallas Arcand, Cree/Sioux/Metis, Tyrese Jensen, Diné/Pima-Maricopa, and Tony Duncan, San Carlos Apache/Arikara/Hidasta.

For the 30th consecutive year the Heard Museum hosted the World Championship Hoop Dance contest, a competition that grows every year. This year, more than 5,000 people came to support 97 hoop dancers representing more than three dozen tribes from the U.S. and Canada.

The Teen Division was won by Nedallas Hammil, Diné, from Phoenix, who faced 14 contestants.

Eighteen participants were in the Tiny Tots division (age 0 to 6 years), which included a shared cash prize of $500 sponsored by the Lightning Boy Foundation.