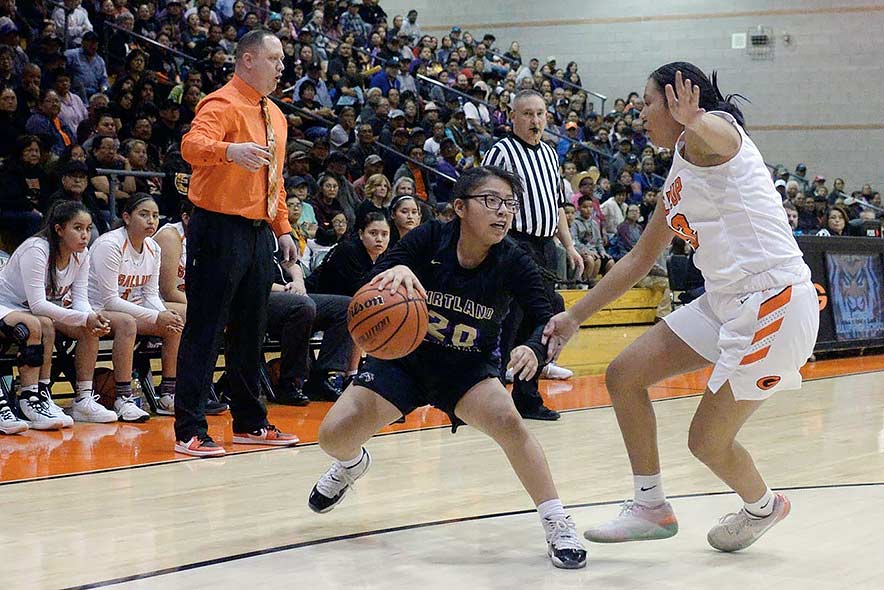 The situation was quite different but it was the same result the Kirtland Central girls’ basketball team served the Gallup Lady Bengals.

For a good part of Saturday night, KC disrupted Gallup’s offense as the Broncos stayed in contention for a league crown in the tough District 1-4A race.

“That is what we try to do every game and usually we’re pretty good,” Lady Broncos coach Devon Manning said of their defense following his team’s 51-37 win at Gallup High.

The last time the two teams played, Manning said their defense wasn’t as good as KC prevailed with a 51-50 win on Jan. 23. He said they gave up almost the same amount of points in the first half as they did the whole game on Saturday night.

“We just grinded it out,” he said. “Everyone contributed and they got on the floor. It was awesome to see. Overall it was a team effort win.”

With the 14-point triumph, the Broncos improved to 16-5 overall and 5-1 in district play as they trail Bloomfield in the league standings.

“We had a little bit setback on Thursday so our room for error got smaller,” Manning said. “We have to take one game at a time. We have a tough rivalry game with Shiprock on Thursday. We have to rest our bodies and be ready to go.”

On Saturday night, the Broncos got 19 points from senior Tatelyn Manheimer as she hit 8-of-9 free throws and three treys. Fellow senior Melanie Yazzie added 10 while Jaymie Smart pitched in eight.

Defensive rebounding was another area the KC team exploited as Gallup came away with three offensive boards.

“I think our defensive rebound was really good,” Manning said. “I don’t remember giving up a whole lot of second-chance opportunities.”

Early in the contest the Broncos conceded two baskets and trailed 4-0 with 6:04 left after Gallup sophomore forward Hailey Long scored a pair of inside buckets.

The Broncos, however, responded in a big way defensively as they held the Bengals to only one basket the rest of period.

“Everybody who played tonight knows the rotations,” she said. “They know where to be so I felt that we really stepped it up.”

Offensively, they had five different players score one basket including treys by sophomore Aisha Ramone, Manheimer and Yazzie for a 13-7 advantage.

The Broncos increased that margin to 23-12 at the break with Manheimer putting in five.

After the break the Broncos held onto that double-digit lead for much of the third until Gallup got some momentum going in the early going of the fourth.

The Bengals scored on five straight possessions and cut the deficit down to 34-28 after a trey by sophomore Michaela McCurtain with 5:01 remaining.

That was as close as Gallup would get as the Broncos finished out the quarter on a 17-9 run for the 14-point win.

The Gallup coach did acknowledge that his team didn’t rebound as well as he would have liked. In the midst of their fourth quarter surge, the Bengals couldn’t corral a long rebound as Manheimer hit a try to give the visiting team a 37-28 advantage with 4:09 left to play.

“We got the stop but we didn’t finish it with a rebound,” he said.

Gallup was led by Long as she finished 11 points while McCurtain added eight.

The Bengals dropped to 14-8 overall and 3-3 in district play as they will travel to its crosstown rivals Miyamura today.