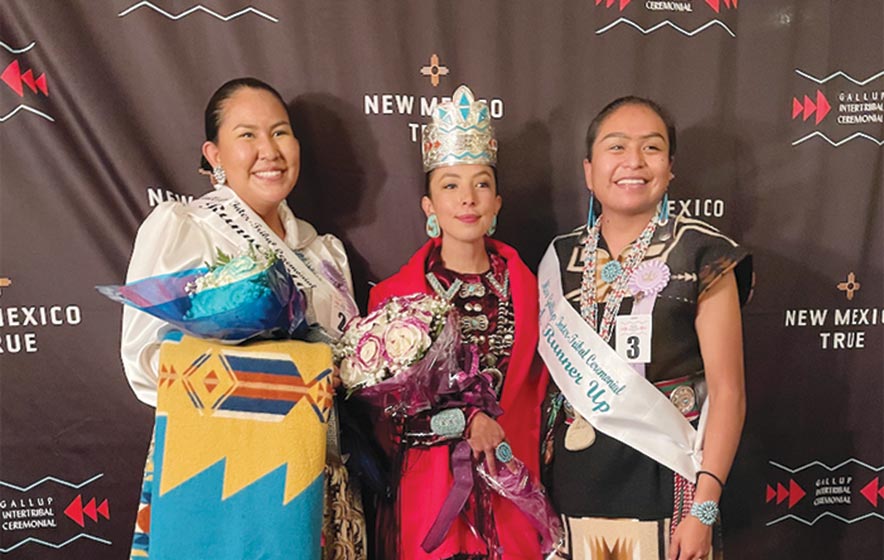 Following in the footsteps of her mother Virginia Ballenger in 1980 and her sister Anna Ballenger in 2006, 26-year-old Amber Shandiin Ballenger on Aug. 21 earned the title of Miss Gallup Inter-Tribal Indian Ceremonial queen 2021.

“My mother and sister cried,” Amber Ballenger said. “I had so much of my extended family in the audience cheering me on. The Gallup Ceremonial is a very prestigious pageant so I was very grateful to be part of this with the five other women.”

The Ceremonial queen pageant originated in the 1930s and is open to Native American women aged 18 to 25.

“It’s really great that we were able to extend Ceremonial to two weeks and let people continue to experience the excitement and cultural richness of the event,” Ballenger said. “I just feel like a lot of us have learned to be flexible in these times and change is also good.”

Ballenger, who was born and raised in Gallup with family roots in Red Rock Chapter, graduated from Rehoboth Christian School and went on to earn bachelor’s degree in family and child studies from the University of New Mexico.

She currently works as an outdoor educator/teacher at the Children’s Museum of Denver and is planning to get her master’s degree in environmental design.

“It was just a great learning experience and a great way to connect culturally,” she said.

She made a Navajo cake – shared during a baby’s first laugh ceremony and Navajo weddings – that was filmed in a five-minute cooking video for the pageant.

For her traditional talent, she performed two Navajo songs: the “Four Sacred Mountain Song” and a song about “Walking in Beauty.”

“I recently took a Navajo singing class to connect with my culture and bond with my mom,” Ballenger said. “It really opened up my eyes to how much can be shared through songs.

“I am just beginning my Navajo singing journey,” she said. “I’m really excited to have discovered this part of me because I never considered myself a singer.”

In the upcoming year, Ballenger will serve as an ambassador for the Gallup Inter-Tribal Ceremonial and Native culture.

“I just hope to spend the year traveling, as much as is possible, and doing virtual appearances to help promote the Ceremonial to the public,” Ballenger said.

She is working closely with the Ceremonial office to plan out an itinerary of appearances throughout the region.

“It’s hard for me to sit still, so I love visiting places,” she said.

In fact, the day after her win, she made her first public appearance as Ceremonial queen at the Santa Fe Indian Market.

“That was fun making my debut there,” she said. “It feels good to be interacting more with others after all of the pandemic restrictions.”

As a highly trained and experienced outdoorsperson with a love for nature and adventure, one of Ballenger’s ambitious personal goals is to climb each of the four sacred mountains.

“This was one way of me showing up for myself, making this challenge,” she said. “As I’m getting older, I want to immerse myself in my culture because I know it’s slipping through a lot of our fingers.”

The first mountain she climbed was Sisnaajiní, or Blanca Peak, near Alamosa, Colorado.

“I did it all alone,” Ballenger said. “My parents were very worried. I said, ‘I got this!’ I absolutely trusted myself and I was safe.”

Ballenger said she took her grandmother’s medicine bag with her and offered her tá’dídíín and sang traditional Navajo songs at the top of the mountain.

“While I was there a hawk came and visited,” she said, which is how she knew her ancestors were with her and protecting her.

Climbing the mountain was an “amazing experience” that she is grateful for, she said.

“There is so much magic up there,” Ballenger said. “There’s so much running water, waterfalls and lakes and you wouldn’t know it from the base.”

Ballenger also hiked Tsoodzil, or Mount Taylor, with her cousin the week before the Ceremonial pageant.

“It was a good bonding experience for us and she helped talk me through the nerves of pre-pageant,” she said.

Ballenger said she just knew it was important for her to get outside in nature before diving headfirst into the pageant.

“We camped for a few days on Mount Taylor and that really helped center me,” she said.

This fall, Ballenger plans to climb Dook’o’oosłííd, the San Francisco Peaks, in Flagstaff.

“I started in the east, and I’m working myself clockwise,” she said.

Even with limited capacity because of COVID-19 restrictions, the El Morro Theatre reported to Inter-Tribal Indian Ceremonial Office Director Melissa Sanchez, who produced the pageant with Richelle Montoya, that 289 people attended the event, which is a record.

“They were really excited because that was the most they ever had for attendance for the pageant,” Sanchez said.

Sanchez said, in working with the pageant committee, the goal was to make sure the Inter-Tribal Indian Ceremonial Office provided a “really empowering” experience for the Ceremonial queen contestants.

“It’s so sweet to be working with these young ladies and getting to know them and going through the process with them,” said Sanchez, who has produced the Miss Indian World talent presentations at the Gathering of Nations for years.

“They’re so polite and so proud of their heritage, their traditional clothing and their language,” she said. “It really is an exciting journey.”

Ballenger wants to encourage others to enter pageants like the Ceremonial queen contest that offer an opportunity to “show up as your best self” amongst a supportive group.

“A lot of times, we don’t do things because of fear,” she said. “We’re worried about getting out there in the public eye. But being a part of something of this magnitude with other indigenous women is a great learning opportunity – to learn their points of view, what their families believe in and their cultural knowledge.

“I highly, highly encourage young women to participate and to learn more about your culture and also yourself,” she said.