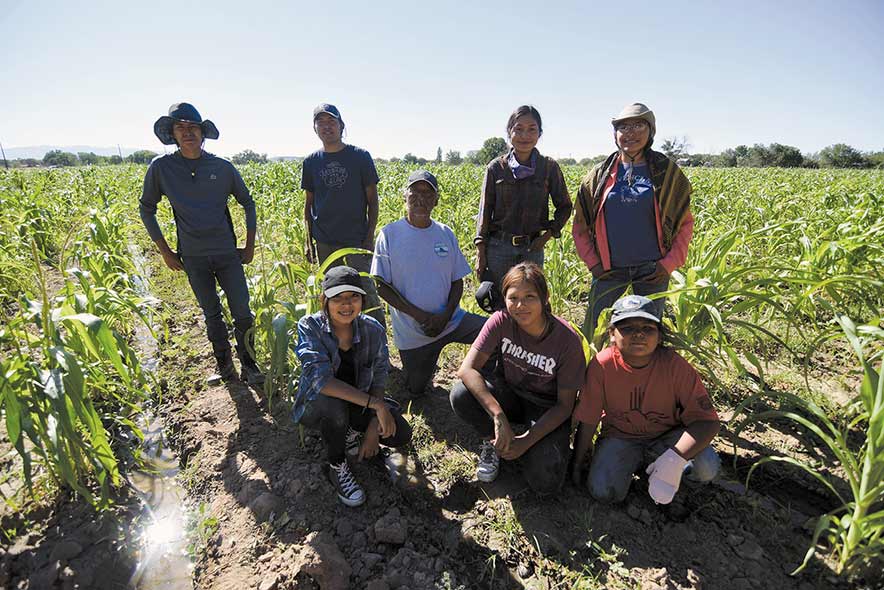 Navajo Times | Ravonelle Yazzie
The Ben family and the summer interns worked hard all season to manage the land and grow three fields of corn.

The temperature at its peak was 100 degrees and the sun was relentless. The morning was already sweltering and there wasn’t a breeze to be felt.

It was around 9 a.m. when Jeneva Ben, 21, jumped out of her Ram 2500 diesel truck that she purchased herself with money she made from her farm. She started directing the handful of workers she supervises. She’s the farm manager for Ben Farms based out of Shiprock. Ben Farms is in the business of neeshjizhii, steamed corn, a tough business with high investment and a high payout. Jeneva is soft-spoken but a natural leader.

It’s easy to see as she takes control of the workday and starts to organize everyone. The plan that August day was to pick three truckloads of corn to steam overnight. Jeneva is a junior at New Mexico State University studying agronomy and crop consulting.

“That basically is being a farm doctor,” Ben said. “Understanding the land, the plants, the topography where you’ll be planting and overall how to communicate with farmers and revitalize farms.”

This is the first year that Ben Farms has a business organizational chart. Jeneva is the farm manager and is overseen by her father, Joe Ben, who is the director of the farm. Then her siblings – Zachariah, Joe Stephen and Najhozhoni Rain – are farm supervisors. Zachariah is also the business liaison. Under them are the dozen farm hands.

New this year are summer interns the farm got a grant to hire.

Ben Farms is unique in that it’s mostly run by young people, which is intentional. Joe Ben wants to pass down the knowledge of farming and producing corn to the next generation.

The youngest worker is 11 years old and has spent the summer learning about how to grow corn for neeshjizhii. “We’ve been farming for awhile but not business-oriented,” Jeneva said. “This year we’ve started to become more serious about becoming a business.” The Ben family has experimented with their farm and tried a lot of different ways to sell corn, even squash one year.

They’ve sold raw corn, fresh steamed corn, kneel down bread and squash. But they saw a higher return from neeshjizhii. So this is what they focus their production on now. Jeneva was selected by her father to lead the farm because of her passion for learning everything she can about how to run a farm.

“To him, my collected expertise I’ve gained at the Western school,” she said, “also the expertise I learned at home when I was young. Putting those both together with my Navajo spiritual knowledge doing Yei’Bi’Chei and how the plants are the root and the foundation to each ceremony.” Jeneva was sitting underneath a tree on a picnic table outside her home. She had her laptop open and her planner.

The farm business isn’t just about cultivating the land. She keeps track of all the workers, what they do each day and how many hours they work. She keeps receipts of what they sell and to whom. She creates a budget that the family works off of. They decide at the beginning of the growing season how they will invest their money to make the farm better.

This year the farms created a formal internship program to teach the next generation of young farmers who will hopefully revitalize their own families’ farms. Teirra Joe, 13, came to the farm knowing “absolutely nothing.”

She had never worked on a farm or been out in the fields. So all of this was new to her. “It’s really cool because I don’t really know anything about farming,” she said. “So, it’s nice for them to explain what they’re doing and how it’s helping the environment.”

Her summer experience has pushed her in ways that she hasn’t experienced and for this she is thankful. “It’s really helped me to be more stronger,” Teirra said. “Being able to take on the sun and just be out here and be committed to being out here every day. It’s sculpting me and making me think about what I want to do in my near future.”

She spends hours in the hot sun which has made her mentally and emotionally strong. Through the tough physical labor she’s learned how to be resilient. It’s not just about this but also teaching young people about Navajo culture. “Being around other influences is helping me find myself,” Tierra said.

The farm provides a space for young people to ground themselves in their identity and to discover who they are. This is one of the main reasons Joe Ben wanted to create this program. Iris Phillips, 11, is the youngest intern on the farm. “It feels good,” Iris said about working on the farm. Iris has learned how farm irrigation works and why it’s important for the corn: “Not to let the corn die without water,” she said shyly.

She also learned why it’s important for the corn plants to be spaced three feet apart and have enough room to grow.

Malik Joey, 14, is one of the more seasoned young people. “I’ve been here for a year,” Malik says with confidence. “I learned how to irrigate. I learned how to make steamed corn with these guys. It was hard with asthma but these guys told me to keep going.” He also helped with tilling the weeds out of the field which he really enjoyed learning how to do.

The other challenge he overcame was pulling corn from the pit where the corn is steamed overnight. The pit is well over 110 degrees. “The steam pit is kind of hard the first day,” he remembered. “When I jumped in I could only get one bucket out. Later on I was able to do two buckets. Now I kind of got used to it.” Malik has also learned that it’s OK to make mistakes. It’s a way to learn what not to do. “It’s OK to mess up,” Malik said.

For example, one day Malik and Iris were playing with the shovel trying to balance the handle on their palms. This is how they learned how sharp the blade of a shovel is. The shovel fell off his palm and hit Iris’ hand. Malik was taught by the Ben family that there’s no way in Navajo to say you’re sorry and that you can only rectify the situation by helping the person you hurt.

So, he bandaged Iris’s hand and learned not to play around with tools. The farm becomes a place to not only learn about farming but important life lessons as well. It becomes a space of teaching culture and language. It becomes a location of learning resiliency and strength. The lessons learned will hopefully carry them through life.