Here’s a question for you: Can a trio of elders, one of whom walks with a cane, plant less than an acre and raise enough vegetables to feed themselves all year with extra to sell and give away?

Absolutely, and feed a flock of hungry gaagis as well. “According to Navajo tradition, you’re supposed to keep a third of your crop, give a third away and leave a third for the birds and animals,” said Patralina Begay, who with her brother Andy and her gentleman friend Chet Baldwin runs the B&B Ranch on this dry but fertile stretch of Beautiful Valley between Chinle and Nazlini. “I told the crows they were taking more than their share.” 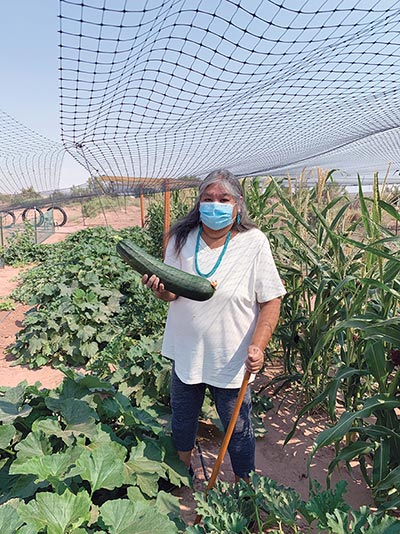 Navajo Times | Cindy Yurth
Patralina Begay triumphantly holds up a nice-sized zucchini, part of her first crop not decimated by hungry crows. After unsuccessfully trying several methods to discourage the marauding gaagis, Begay found that stretching bird netting over the garden seemed to deter them.

This year they might have outsmarted the gaagis by building a “high tunnel” hoop house and erecting a framework of bird netting around the outside garden, but an inspection of the corn crop last Thursday revealed at least one ear completely shorn of its kernels by some critter or another. “If that’s all the damage we have, we can handle that,” laughed Begay as she hobbled between tall rows of corn and stepped over snaking squash vines laden with Hubbards, zucchini and crookneck that seemed to grow as we watched.

An accident a few months ago left her with a jammed knee, but she’s out every day watering and weeding. As the feminine third of the B&B trio, she has even outfitted the hoop house with a picnic table and a cute wishing well decoration. “When it’s not too hot, we love sitting out here,” she said. “It’s so peaceful.”

It is, once you get over the feeling of being overwhelmed by exceedingly healthy vegetation. The Hubbards have extended their giant tendrils from one side of the hoop house to the other, pausing occasionally to pop out gray-green warty globes the size of Thanksgiving turkeys. Begay has to hack the vines back twice a week so they don’t smother the peppers and beets.

The secret to this abundance is no secret, unless you count hard work and not being afraid to ask for help. Begay credits Diné College’s Land Grant Office, Chinle’s New Dawn program and the U.S. Natural Resource Conservation Service with installing the tiny farm’s infrastructure and helping the three elders, who already had a well-established cattle ranch, learn how to farm.

Begay, a long-time school maintenance worker, retired in 2014 to take care of her mother, who was living on the home-site and grazing permit she had shared with Begay’s father before his death. “Mom only lasted a few months after I moved out here,” explained Begay. “Her last words were to Chet: ‘Hello, my son. How are the cows?’”

Begay knew she would have to continue the ranch, but she wanted to do it right. She began learning the requirements for the Native American Beef Program so she could get top dollar for her cows. “My dad was always a good record-keeper, so we were ahead of the game,” she said.

A couple of years ago, once B&B was firmly established as a premium beef producer, the trio decided to diversify into farming. As a former school employee, Begay is well aware of the advantage of education. They visited the Land Grant Office, the NRCS office and New Dawn to see what help was available to get started farming.

Benita Litson at the Land Grant Office volunteered the strong young backs of her students and interns to run a network of drip irrigation line in a 150-foot square plot, and also gave the new farmers their first seeds. Filling a 250-gallon tank on the back of a pickup truck, the B&B farmers can run a hose from the tank to the drip system and water the whole garden by gravity feed.

“They were so helpful,” Begay said of the land grant team.

The first year, the new farmers excitedly watched their corn plants reach toward the sky as the squash vines spread out underfoot. Then, just when they were about ready to harvest, “the crows came and got it all,” said Begay, who is Tó Dich’íinii born for Deeshchíinii. “We were so disappointed.”

They tried hanging CDs, they tried the fake owls, but nothing seemed to work. That’s when Lyndon Chee of the local NRCS office suggested the high tunnel, a hoop-style greenhouse with a tall radius to allow for more air circulation. Chee got the family a grant for a high tunnel with a 30-by72-foot footprint, but the elders didn’t have the expertise or the strength to build it themselves.

According to Begay, Ferdinand Notah at the Navajo Nation Department of Agriculture told them the department would match the grant and supply additional materials and labor if the department could use it as a pilot project. But as the family watched the months go by and it was getting perilously close to the deadline for the grant to be expended with no word from the ag department, they decided to look elsewhere for help.

“Benita and her crew came over and installed the frame,” recalled Begay. “We got all our friends and family on it. We completed it just days before the deadline.”

The high tunnel not only kept the crows out, it extended their growing season to just about year-round. In the winter, by placing jugs of water between the rows that heated up during the day and radiated heat by night, they were able to harvest lettuce and carrots. They planted the squash in March and are now harvesting that, with beets, carrots and peppers all coming on.

The family has been attending workshops from New Dawn, a program funded by a federal grant administered by the Navajo Nation Department of Health that supplies seed and know-how to families interested in reclaiming their agricultural heritage.

“The workshops are very informative on farming techniques on how to grow and care for your crops,” said Begay, “and they’re all free.”

They learned, for example, which crops do best planted side-by-side and how to stagger plantings so they could harvest a little at a time for several months. They obtained a lot of seeds and bare-root fruit trees to plant.

For shade on the greenhouse’s sunny side, they cut starts from a Navajo willow and a poplar tree from the Navajo Nation Forestry Department’s Native Plant Garden in Fort Defiance.

Last Thursday Begay invited Wanda Clark, director of New Dawn’s Chinle office, to see what her help had wrought. Clark beamed as she stroked the almost-ripe honeydew melons and Hubbard squash as though they were cute, pudgy animals. “I’m so happy our New Dawn seed is being utilized,” she told Begay, confiding that she had worried the program would be a bust this year since it was forced to shut down in March, just when people were obtaining seed for the coming growing season. “I’m so proud of you, Pat!”

Pat Begay and her partners said they enjoyed the whole experience, even matching wits with the wily crows. “You walk into the garden and all your little plants say ‘Hi!’” gushed Begay. “It’s so much fun.”

“Sometimes I hear Pat talking and think, ‘Who’s she talking to?’” said Baldwin. “I’ll walk out there and she’ll be talking to the plants.”

“They listen, too!” insisted Begay.

Baldwin and the Begays were hoping to make a little money at the farmers’ markets this year, but all have been canceled due to the pandemic. They did set up a roadside stand for their crop of small watermelons and got more than some extra cash. One woman picked up a melon and cradled it like it was a baby.

“She was almost crying,” Begay recalled. “She said, ‘This is what we used to grow.’”

Older neighbors come by and tell Begay this entire part of Beautiful Valley along the wash was once cornfields, and they’re happy to see some green here again.

Asked by Clark if Begay was spreading the gospel of gardening in her neighborhood, Begay said she’s trying. “People are really interested until they see how much work it is,” she said. “My cousin visited and said, ‘Bless me so I can have all this!’”

She complained that her garden kept getting trampled by marauding livestock. Recalled Begay, “I said, ‘You don’t need a blessing, you just need a better fence.’”