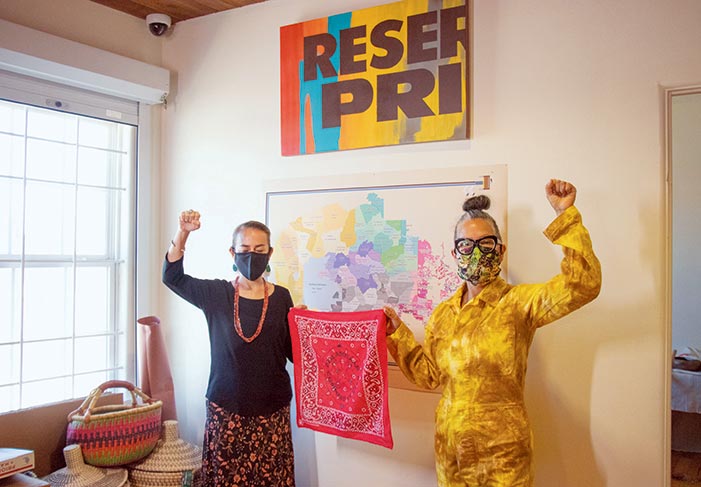 Radmilla Cody had already been thinking about the plight of domestic abuse victims during the COVID-19 pandemic when she read an article in the Navajo Times about the funding for the Nation’s domestic violence shelters being delayed for eight months.

“I was very upset and disappointed,” said Cody, a DV survivor and activist with K’e Infoshop in Window Rock.

Upset and disappointed, yes, but far from helpless. She already had a powerful network of fellow women activists as close as her cell phone.

First she called Chenoah Bah Stillwell-Jensen of First Nations HealthSource in Flagstaff, who introduced her to the indefatigable Amy Yeung of Albuquerque.

Hearing about the situation at the shelters, “There wasn’t any choice for me,” Yeung said. “I had to respond.”

The trio decided to first focus their efforts on Ama Doo Alchini Bighan Inc., the DV program in Chinle. Like all seven DV shelters contracted with the Navajo Nation, ADABI had not seen any money since October. It had the added challenge of being in the current coronavirus hotspot on the Navajo Nation. The staff has been volunteering their time, and they’ve been relying on donations of food for clients who show up hungry. There was $127 in ADABI’s bank account. But they weren’t turning any victims away.

“It’s an absolutely tragic situation,” said Yeung. “As a mom and a woman, when sisters are in that situation, I can’t just turn the other way.”

Since the COVID pandemic made its way to the Navajo Nation in March, Yeung had already pivoted her upcycled clothing company, Orenda Tribe, to manufacture facemasks and stockpile hand sanitizer and nutritious long-shelf-life meals in a Flagstaff warehouse for distribution to hard-hit points throughout the Navajo Nation.

Money for the effort is raised by her Spread Love + Shine Light silent auction website (which includes, among many other donated handcrafted items, gorgeous embroidered facemasks). Through partnerships with boots-on-the-ground groups, that effort was well in hand.

So Yeung, whose career in fashion and as an entrepreneur had provided her with considerable PR skills, decided to focus her efforts on ADABI.

She discovered the nonprofit’s director, Lorena Halwood, was great at saving lives; not so good at tooting her own horn.

“She didn’t even have a place for donations on her website,” Yeung said. Yeung redesigned the website, then slammed her company’s social media sites with information about ADABI, enlisting the help of Nate Lemuel of Darklisted Photography to record a tear-jerking video interview with Halwood.

Within four days, ADABI had $32,000 in its previously bare coffers. As of Tuesday, $10,000 more had been added. It’s not enough to make up the $250,000 the shelter is owed by the Nation, but “at least she can pay the light bill, fill the freezer and put gas in the car,” Yeung said. “Women doing this warrior work shouldn’t have to worry about things like that.”

Halwood, who was feeling depressed and exhausted from the continuing battle with the tribe for funding (see accompanying story in A section), didn’t know what to say when the women called her out of the blue and offered to help. “It was like I was walking through a long, dark tunnel and suddenly I could see a light at the end,” she said.

To maintain the momentum, Orenda Tribe has partnered with the K’e Infoshop and First Nations Health Source to create the Dzil Asdzaan (“Mountain Woman”) Command Center. Basically, Yeung said, “We’re a group of matriarchs who respond to needs the government doesn’t seem to be getting to. We’re really good and we’re really fast.”

“I linked up with some fierce women who mean business, and I love it!” said Cody.

In the works for the near future are a benefit concert featuring a nationally known artist and some ADABI-branded items that will be sold on the auction site.

Cody said Dzil Asdzaan is expanding its efforts to the Tohdenasshai Shelter Home in Kayenta, the other program located on the Navajo Nation that is not directly supported by the tribe. Eventually they would like to extend aid to all the shelters.

“Our advocates,” said Cody, “should not be worried about how they are going to keep their lights on and survive while working tirelessly to save lives.”

Information: Orenda Tribe on Facebook and Instagram; orendatribe.com/spread-love-shine-light-1; adabihealingshelter.org. If you or someone you know is a victim of abuse and sexual violence contact the National Domestic Violence Hotline 800-779-(SAFE) 7233. Help is free, confidential, and available 24/7.