Navajo Pine harrier uses running as his way out 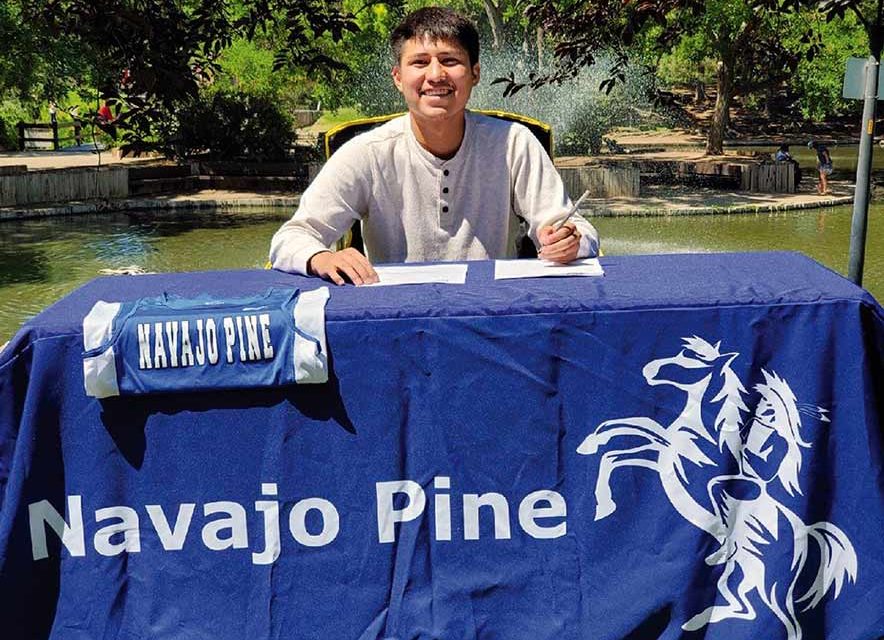 Marshall did almost anything to get better as he trained hard with hopes of getting noticed and earning a scholarship. The Navajo Pine graduate fulfilled his wishes as he signed with New Mexico Highlands University late last week.

“I’m just glad that I got a full-ride scholarship so that I don’t have to pay for anything,” Marshall said. “That’s the best part because all my life I was worried about how I’m going to do this and how I’m going get this when I grow up.”

Coming from a single-parent household, Marshall said running was his only ticket to pursue an education.

“I used my running to get what I wanted,” he said. “The only chance I got was through running.”

The 18-year-old credited his mom, Lena Begay, for pushing him to make something for himself.

“She’s the reason why I’m doing this,” said Marshall, who has six siblings. “I’ve gone through some struggles and running was the only opportunity I had to get out. She talked to me about the things I wanted and every day she just told me to run, run and run.”

“He’s real talented and he’s very driven,” she said. “I’m just so happy for him. He’s my only child that’s gotten a scholarship and I can’t explain how happy I am for him.

“As a family we’re all excited for him,” she said. “We’re grateful that he’s gotten this far and that he’s making it.”

Marshall said he had at least eight serious offers and he made a pros and cons list to help him make his decision. The top schools he considered included Pima Community College, University of Antelope Valley in California, Eastern New Mexico University and New Mexico Highlands University.

“Looking at the schools that I could have gone to New Mexico Highlands gave me more,” he said. “I had a lot to consider but (NMHU) offered everything I needed and wanted. I don’t have to pay for anything so it’s a good win-win situation. I’m looking forward to going there.”

As part of a three-time state championship team, Marshall said he’s going to miss the camaraderie he shared with his high school coaches and teammates.

“We had a real strong team,” he said. “We’ve known each other since we were in elementary school and we basically grew up like brothers. We stuck together and when we started out as freshmen we knew what we wanted to get out running.”

To help commemorate the success they’ve had, Marshall said his teammates created an Instagram video about running on the reservation: https://instagram.com/runningtherez?igshid=1wwbu5h2glbl4.