King of the quad: Navajo teen carving out role in grueling sport 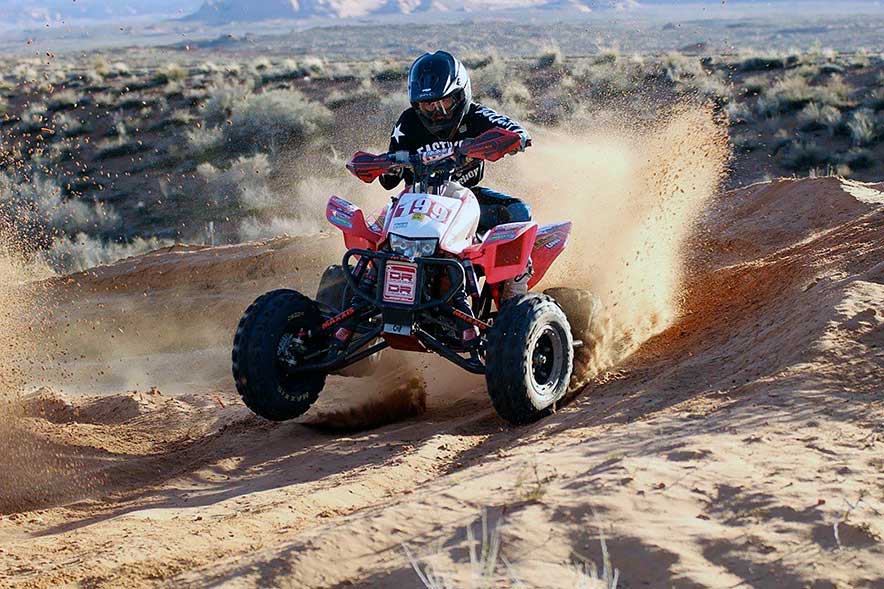 Submitted
Jarrett Curley, 17, competes against an elite class of quad racers in the World Off-Road Championship Series. The soon-to-be Page High senior is the youngest competitor in the Pro-Am division.

At 17 years old Jarrett Curley is occupying a zone that every quad racer hopes to find.

The Coppermine, Arizona Diné youth got his start as a dirt bike racer before he added quad racing four years ago. In the latter sport, he has earned the respect of his racing peers in the World Off-Road Championship Series even though they are much older than he.

“I’m the youngest kid to be racing in the Pro-Am,” Curley said of the elite class of quad racers. “The people that I race against are 23 to 35 years old.”

Curley, who is Naasht’ézhi Tábaahá and born for Tl’ízílání, comes from a family of racers as his dad, uncle and older sister also raced. He credits his upbringing for the success he’s having as Curley started racing against the pros since he was 13 years old.

“It all goes back to how I grew up and how my dad (Larrison) taught me how to ride,” he said. “I really never thought of myself being up there so early so this is still pretty new to me. I thought it would take a little bit of time but I put in a lot of training and engineering to my bikes and quads to get here.”

The soon-to-be Page High senior, who started riding at 3 years old, said he doesn’t have a preference between the two disciplines as they vary in riding techniques.

“The bike kind of does the work for you but you still have to man it,” he said, adding that they differ in “body language.”

When pressed about what he meant about “body language,” Curley compared it to the difference between riding a horse and a bull.

“There’s a specific way to ride a horse and you can’t ride a bull the way you ride a horse,” he said.

Curley has won numerous awards in both sports and based on his winnings his mom, Beatricia, said they’ve had “many steak dinners” to celebrate.

“He was destined to do this,” she said. “Deep down I knew this is what he’s meant to do. As parents all I can do is support and push him forward. We’re his support system, giving him what he needs.”

Despite his young age, Beatricia said she’s not surprised at Jarrett’s progress, as he has grown by leaps and bounds, especially the past four years.

“I always knew he was going to do it,” she said.

The epiphany came when the organizers of a WORCS race in Las Vegas, Nevada summoned the family to ask if it was OK for Jarrett to race in an elite race.

“When we went to the booth they told us that he was too fast” to compete in a race he initially signed up for, she said.

“They asked us if we can move him up a class so we had to give them our permission because he was a minor,” she said. “I told them ‘Absolutely,’ and you could see that they were amazed with the talent he had at a young age.”

Beatricia said her son is real passionate about what he does. He spends countless hours either training or working on his rides.

“That’s all he talks about,” she said of her only son. “The other day he dropped me off at work and he was out there riding from eight o’clock to five o’clock so we had to call him to come home to eat.”

Jarrett said his quad (a four-wheel all-terrain vehicle, for the uninitiated) is not your typical quad you see in showrooms.

“I’ve had a lot of work done to it. I’ve put in a lot of man-hours and a lot of aftermarket stuff put into it,” he said, noting that nearly everything is done by his immediate family.

“We mostly do everything in-house,” he said. “I do have a couple of sponsors that do some of our motor parts and suspension.”

Besides his dad, Beatricia said her son has learned a lot from his sister, Bhreanna, who is a three-time quad champion.

“She kind of showed him the ropes in quad racing,” she said. “She showed him to be humble, and having that appreciation of winning and losing. Behind closed doors you can fall apart but as a mentor you have to be that positive person that people look up to you. That is what his older sister strove for and I see a lot of that in Jarrett.”

In a typical season, Jarrett said he competes in one race a month and his WORCS races last anywhere from an hour to an hour-and-half.

“Every single race is different,” he said of the varying courses in California, Utah and Nevada. “The terrain is different and some of the tracks they have can go up to 14 miles.”

Jarrett said he wants to continue racing as long as he can but he would like to do this on a national stage, competing in one of the premiere motocross circuits.

To do that, Beatricia says he needs to be picked up by a national sponsor.

“That’s what we’re striving for,” she said. “We want to get him out there. We’re trying to get him on a team so that he can race at that next level.”

Beatricia said she wants her son to complete his senior year at Page High but if the opportunity does come up elsewhere for Jarrett, the family is not going to turn it down.

Despite his young age, Beatricia said her son has gained a lot of admirers, including some of his mentors, particularily Beau Baron and Mike Sloan, a fellow Diné.

“Beau is so amazed with his talent,” she said. “He’s told him that that Jarrett is going to bigger than him and be somebody great.

“That means a lot and we try to take it humbly,” she said. “To have people notice it is truly amazing.”

Four weeks ago, Jarrett competed against his mentors in a dirt bike race in Mesquite, Nevada and in the middle of the race he trailed Baron and Sloan in third place.

“My bike ended up dying,” he said. “I had some sparkplug issues.”

And although he did get his bike running again, Jarrett said he was too far behind to earn a position.

His next competition is scheduled for June 25-27 near Las Vegas in the Silver State 300. This tag-team race is part of the Best in the Desert Racing Association. He is teamed up with Travis Wells, one of his former competitors.