Diné cowboy one of 3 grand marshals for Western Fair

When Justin Granger was growing up here, he wanted to get as far away as possible from Tuba City and leave it behind. “Once I turn 18 or old enough,” he often said, “I’m going to move away from Tuba and I’m never coming back.” Now he’s back, and he realizes he always wanted to come home. 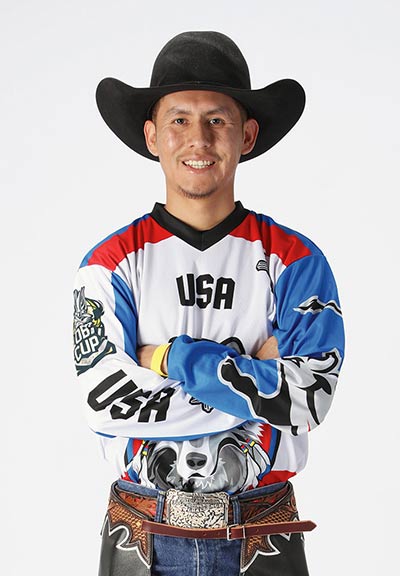 Submitted
Bull rider Justin Granger will be one of three grand marshals for the Western Navajo Fair Parade.

When the 28-year-old graduated from Tuba City High in 2009, he left home in Rare Metals, Arizona, to find another home in the Albuquerque and Rio Rancho, New Mexico, area. Granger recently returned home to Western Navajo where he grew up around the rodeo arena and where his dream of becoming a professional bull rider began. “Ever since I was a child, it was rodeo,” Granger said as he reminisced about his childhood.

“I’ve always been around rodeo my entire life. I rode sheep and made my way through the ranks and stuff like that.” He continued, “All I can remember is the junior rodeo and watching my dad (Teddy Granger, a bull rider in his own right) or uncle (Terrance Granger, an Arizona State High School Rodeo Association champion bull rider) compete at the rodeos here – just them competing. “That was the big thing,” he said. “And then (seeing) the carnival. When I was little, (my family and I), we’d always be at the (Western Navajo Fair) parades.”

Justin Granger also remembers watching PBR legends chase a gold buckle in Las Vegas on TV. “I’ve watched the PBR ever since I was a kid,” he told the PBR at a Kansas City, Missouri, event in March. “Chris Shivers, Justin McBride – I looked up to all of those guys.” Granger is now living his childhood dream of being a professional bull rider in the PBR and is part of the Team USA Wolves, an all-Native American team. He ranks 63rd in the Velocity Tour and 133rd in the world standings.

“This is my 10th year riding with the PBR,” Granger said. “I’ve been doing it ever since I was 18 years old. It’s always been the level I wanted to compete at. And I knew I had the ability and the talent to further my riding off the Navajo Nation and take it to a professional level. It’s all I’ve done.” Granger also competed in the rodeo circuits around the region during his time off from traveling. “It took me longer than expected to get where I’m at right now,” he said. “I think it was just doing things right as far as getting the mental things down. It’s just a different atmosphere than just being around these local bull-riding events.

“So I believe it was mainly my kids that made me really focus on being a better bull rider at a later age and maturing – just providing for them because this is the only income I’ve ever relied on since I was young.” Granger was selected to be one of three grand marshals in the 51st annual Western Navajo Fair parade. He is the father of four children – 9, twins who are 7, and a 2-year old. He is also engaged.

Being one of the grand marshals in the Western Navajo Fair parade is a big deal, Granger said. “I remember going when I was a kid, going for candy and that was about it,” he said. “So, when I got called to be a grand marshal, I was like, ‘Wow! OK, I’ll take it on.’ It made me really think, ‘Man, it’s been this long.’ “The past few years have been great to me with the PBR – a lot more bulls that I’ve (ridden) in the previous years – pretty much made a name for me on the professional level,” he said.

Granger worked his way up to PBR’s Unleash the Beast series, which he says was one his greatest accomplishments. “I got to travel from coast to coast, border to border – all across the U.S. I went all the way to Maine,” he said. “They have PBRs in Maine! All the way to California – all over, every single state.”

Granger said he usually leaves home on either Friday or Saturday and then returns on Sunday to take care of his family and take his children to school the following day. “I just wanted to start a life here and bring my kids back here,” he said. “I just wanted them to get to be in this atmosphere here where I grew up.” He added, “Once you leave Tuba and you go to a different town or city, you’re just like, ‘I miss Tuba.’

And the food is not as good. Our Taco Bell is the best and our McDonald’s is the best, our KFC is the best. In different towns you go to these fast food places and restaurants, it’s not the same. They just don’t taste the same. “I always tell everybody, ‘Tuba City is the best town and it should have been the capital of the Navajo Nation.’”