He’s gotten back to his normal routine after two terms in office but on Veterans Day, the former Cameron Chapter president wanted to do something special for the community veterans. 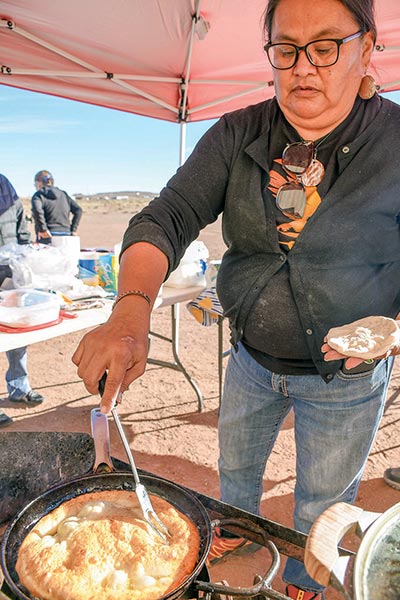 Navajo Times | Krista Allen
Lynn Tso uses a two-pronged fork to turn a frybread Nov. 11, when she and her family hosted a free Navajo Taco luncheon for military veterans outside their home in Cameron, Ariz.

“I’m doing this in their honor,” Tso said Nov. 11 outside his home in Na’ni’á Hasání, Ariz. “Every Navajo family on the reservation––probably in Native American Country, has somebody that’s been in conflict.

“We all have veterans in our families,” he said. “We all have somebody that fought in a war on behalf of this country. This is just a small thing.”

Tso said he and his wife, Lynn, got up that morning and decided to commemorate the veterans who forged and defended America – a promise of freedom and equality, democracy and justice, possibility and hope.
The couple decided to make Navajo Tacos and give them free to the veterans who stop by their home.

“My grandson by clan, AJ (Ames) Meyers, he’s done quite a bit for our people by way of firewood delivery––him and his family supply firewood to chapters every year,” Tso explained. “I got a whole of him and asked if he had any firewood that he could donate.”

Meyers obliged and delivered firewood to Tso’s home for veterans to take.

Warriors on the battlefield

Native Americans and Alaska Natives serve in the armed forces at five times the national average and have served with distinction in every major conflict for over 200 years, according to the USO, a charitable organization in serving active-duty service members and military families. And Natives have the highest per-capita involvement of any population to serve in the U.S. military.

“We have one of the chapters with the most veterans,” Tso said. “It’s quite an honor to know that we live in a community like that.”

Tso said he doesn’t have a list of Na’ni’á Hasání veterans, but there are quite a few. He said he’s noticed a lot of the Korean War veterans are passing on too.

“Our Vietnam veterans are getting up there in age, and they’re at the age we need to start helping them in any way we can,” Tso said. 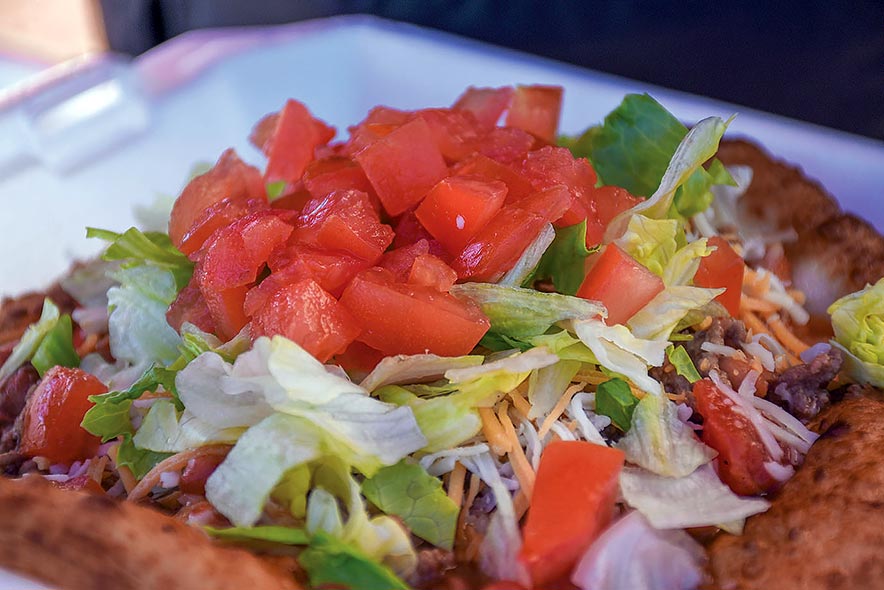 Navajo Times | Krista Allen
A freshly made Navajo Taco is topped with tomatoes and other toppings Nov. 11, when the former Cameron Chapter president and his family hosted a free Navajo Taco luncheon for military veterans outside their home in Cameron, Ariz.

Tso served as chapter president from 2013 to 2019, during which he led his people and hosted numerous community events.

“I do miss it, being in office,” Tso said. “I enjoy helping people––my community. I did the best I could. And that’s all we can ask of our politicians, the new ones coming in and the ones in office.”

Today, he’s working for two tour companies – one in Page and one in Flagstaff.

“They’ve been keeping me pretty busy,” Tso said. “A few of my community members who were used to seeing me quite often––they ask where I’ve been hiding. I always tell them, ‘I’ve been pretty busy being a family man again and working.’”

Tso said the Veterans Day taco luncheon was open to any veteran who came by his home. He and Lynn posted a few signs alongside the roadways.

Tso added that the dough to make frybread was donated by Blue Canyon Grill in Cameron and the firewood was donated by AJ (Ames) and his Tuba City-based “Diné Bá’ádeit’į́ – For the People.”