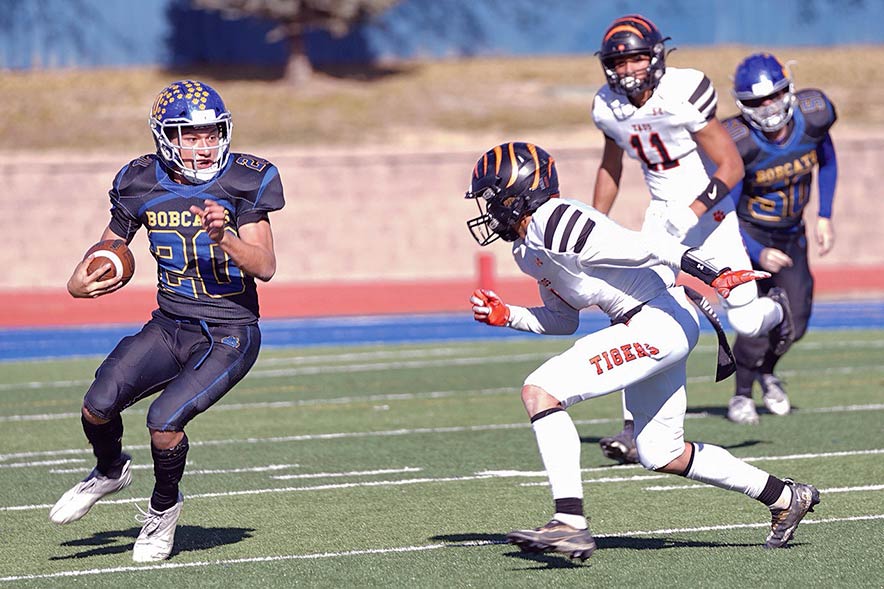 On Saturday, his Bloomfield Bobcats reached the 4A state title game with a 45-13 win over the Taos Tigers. 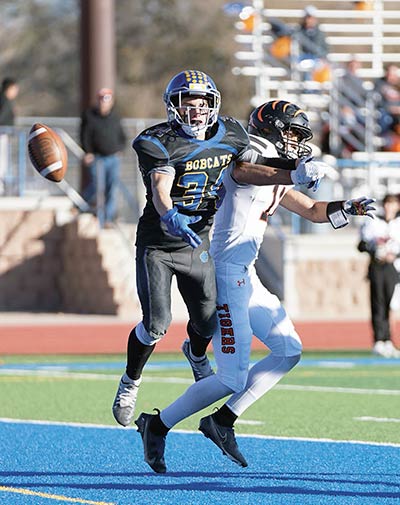 “That was one of the things we talked about in the locker room before the game,” Kovacs said. “You know, getting a birthday present like this (was good), but I’m going to be honest with you – it’s not about me.

“If you look around here, we have such an awesome school, an awesome facility, and community,” he said. “Being from Bloomfield, one of my big goals being the head coach is I wanted to bring the community back. I think football at the school is a huge thing.”

The Bobcats scored on three consecutive drives for a 19-0 lead, improving to 11-1 overall.

“Our defense has been like that all year,” the Bloomfield coach said. “I can’t say enough about coach (Damon) Lynch and his staff.

“They do such a great job preparing our kids for every opponent, and this was no different,” he said. “We took (Taos QB Dameon) Ely out of his repertoire, and he’s the heartbeat of their team.”

The 32-point win pits the Bobcats against the Silver Colts in Saturday’s state championship game. It is scheduled for 1 p.m. at Bloomfield High School.

“I can’t wait,” said senior quarterback Ryan Sharpe, who accounted for four touchdowns on Saturday. “I think it’s special to play at home, with it being my last high school football game.”

The top-seeded Colts reached the title game by defeating No. 4 seed Lovington 23-7 in the other semifinal. The meeting on Saturday will be the second for both clubs as Silver defeated the Bobcats, 45-6, on Oct. 7.

“They’re a grind-out, hard-nosed team,” Kovacs said of Silver. “They’re gonna fight you in every play, on every down, and so you’re gonna have to scratch for every inch. We just got to match that enthusiasm and be in the trenches with them.”

Sharpe said they remember that earlier game with the Colts, and they’re looking for a better outcome come Saturday.

“We’re gonna go into this week more prepared,” he said.

The Bloomfield QB completed 8-of-14 passes for 172 yards in last week’s win. His longest pass went for a 74-yard scoring strike to junior wideout Drew Perez.

Before that connection, Perez picked off a pass from Taos QB Dameon Ely to set up that drive.

Defensively, Perez finished with two picks, and in the opening drive of the second half, he covered the seven yards needed to extend an 80-yard scoring drive.

The Bobcats were facing a fourth-and-7 at their 23-yard line, and Perez advanced the ball to give Bloomfield another set of downs.

“Any one thing is going to flip the script,” Kovacs said while alluding to Perez’s fake punt and two picks.

While trying not to take any credit, Perez said he was doing his job.

“We got a couple of key players injured on the sidelines, and I think we all came together,” he said. “We did this for coach because we owe him everything.

“He’s gone thick and thin for this team,” he said. “He put in hours in that office, and we wanted to win this for him.”

On the ground, Bloomfield finished the contest with 303 yards, with 110 coming from Jesse Seitzinger. The junior running back accounted for half of the Bobcats’ four rushing TD scores, including one from 54 yards out.

Senior Andres Gordo added 49 yards on six carries and one TD before he was sidelined with a shoulder injury in the opening half.

The Bobcats also lost the service of sophomore Eli Snell-Martinez in what appeared to be a concussion.

Kovacs said their conditions were unknown on Saturday, and their status will be day-by-day.

As for earning a spot in the title game, Kovacs said his club took it upon themselves to reach this moment as last year’s team came up short in the state semifinals.

“That is what we talked about in June,” he said. “These kids really took it upon their shoulders, and they took it personal … and now we’re gonna to play in the state championship game.

“We’re gonna fight our butts off and try to get a win,” he added.