Mother of fallen remembers her son

She will always miss him. 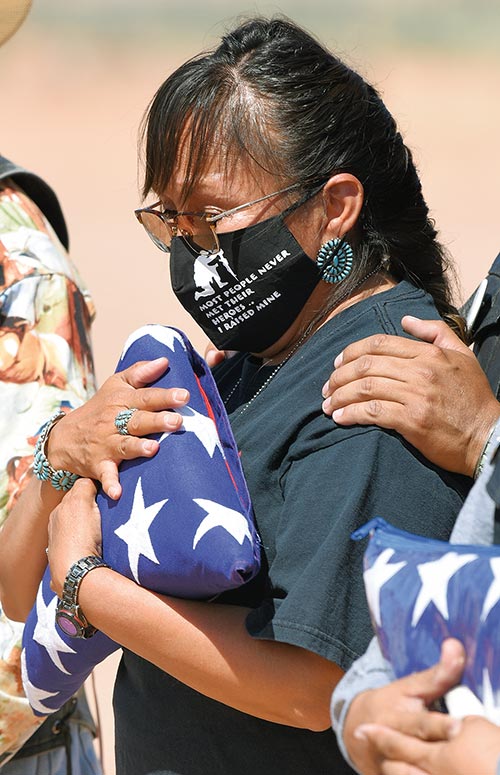 Navajo Times | Donovan Quintero
Eva Yazzie tightly holds the flag that draped her son Lance Cpl. Alejandro “Poncho” Yazzie’s casket during a flag-folding ceremony at the Round Rock Chapter House in Round Rock, Ariz. Yazzie was killed in action on Feb. 16, 2010, in Helmand Province, Afghanistan, at the age of 23.

On Sunday, at the conclusion of the 2021 Riders4Warriors Memorial Day Honor Run at Round Rock Chapter in Round Rock, Arizona, a flag-folding ceremony was held in which the flag that draped Yazzie’s coffin, neatly tucked away in a flag case, was taken out and refolded.

Eva stood quietly as members of the Riders4Warriors handled the flag. Tears began to fall as one of the flag-folding scripts was recited.

Afterward, Chris West, a Riders4Warriors member, returned it to her. Eva held it tightly and wept.

To the world, her son is honored and is remembered as paying the ultimate sacrifice for his country. But to her, he was her favorite football player who ran a 99-yard touchdown during a game between Red Mesa and his team, the Rock Point Cougars.

The little boy she remembers who always wanted to be a Marine. She said she wonders if his touchdown run is still a record that has not yet been broken.

“He used to play ball,” Eva said on Sunday. “I wonder if anyone has broken his record on the reservation.”

Eva said Alejandro, 23 at the time of his death, loved to ride bulls, she fondly remembered.

Even after 11 years, she said not a day goes by she does not think of him.

“Sometimes I catch myself crying and I just have to pull off the road and say my prayers,” Eva said of the grief she still feels for the loss. “After, I get back on the road and go again. I think that’s the only way I keep myself going too.”

Her other children have all moved out and now it’s just her and her husband, Pete, she said. Soon, he’ll be getting back on the road for work.

He was a combat engineer assigned to the 1st Combat Battalion, 1st Marine Division, 1st Marine Expeditionary Force, in Camp Pendleton, California, when he was killed on Feb. 16, 2010, in Helmand Province, Afghanistan.

A 2010 Navajo Times story by Jan-Mikal Patterson said Yazzie was about to become a father when sniper fire took his life. Alejandro Yazzie Jr. was born in 2010, a few months after his father died, Patterson wrote.

“Every day I miss him and it’s hard,” Eva said. “These guys (Riders4Warriors), they boost me up and they talk to me. I really enjoy being with these guys, they’re family.”

His old battalion pitched in and got them a 2010 GMC Canyon, which was then decorated with images of him. Eva and Pete drove the truck on Sunday to honor their son.

The paint was beginning to fade and crack. But they did not mind. 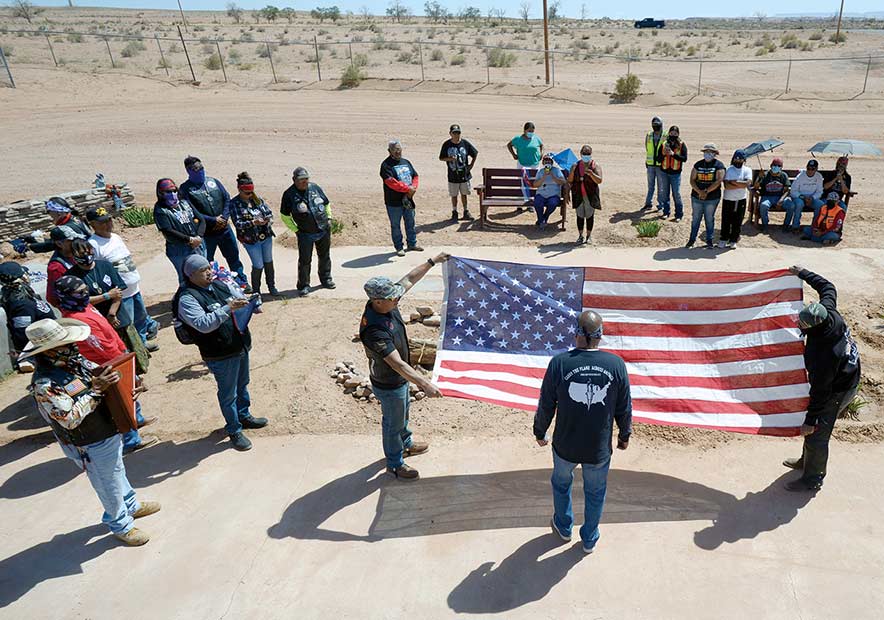 Navajo Times | Donovan Quintero
Members of Riders4Warriors refold the flag of the late father of Apache County District 2 Supervisor Alton Joe Shepherd, right, during a ceremony on Sunday at the Round Rock Chapter House in Round Rock, Ariz.

Pete parked at the Lukachukai Chapter House and immediately grabbed the flag from the bed of the truck and placed it in a steel tubing that was at the back end of the truck. The more than 40 bikes that participated in the run surrounded the truck.

He took the flag down before leaving the chapter house. About 20 minutes later, the group arrived at the Round Rock Chapter where the run concluded.

“He was a decent handsome guy, my baby,” she said.