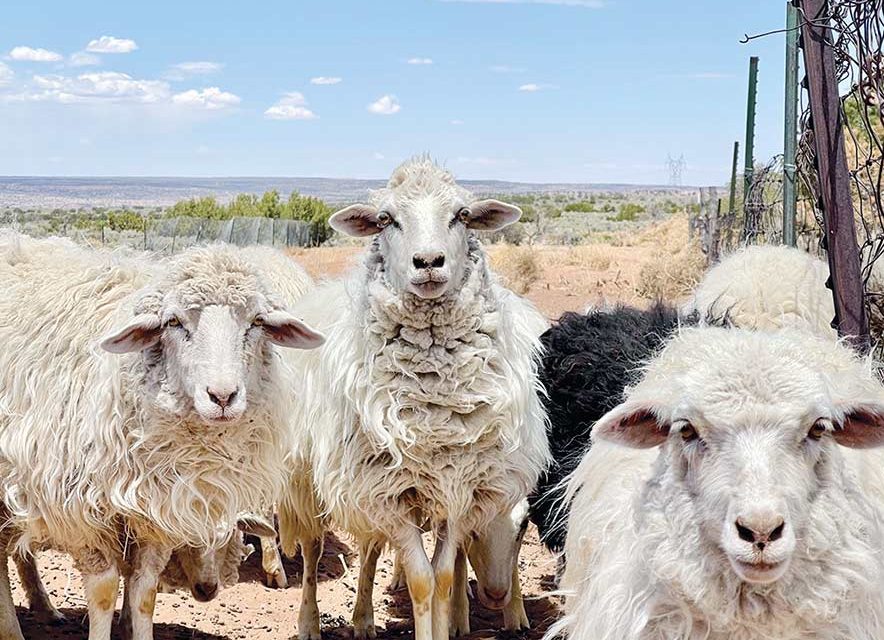 Courtesy photo | Nikyle Begay
These Navajo churro sheep don't know it, but they are part of the new Rainbow Fiber Co-op, an effort to increase the price of wool by taking over the production of a value-added product, high-quality yarn. 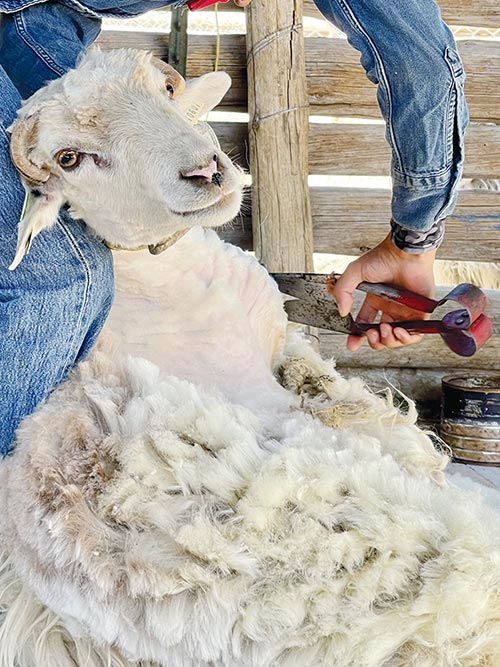 Courtesy photo | Nikyle Begay
A sheep is sheared last Thursday at one of the ranches participating in the Rainbow Fiber Co-op. This ranch is the last of the three participants to shear, and the fleece will be taken to a non-profit mill in Mora, N.M., for processing.

Local wool-buying events, where producers usually connect with buyers, were all canceled.

“Daisy” (she didn’t want her real name used because of privacy concerns), who started raising churros with her husband “Merle” in 1978, said she remembered her grandmother taking a few bags of wool to the local trader and coming back with a wood stove when she was a child.

Last year, churro wool dropped to a penny a pound.

The last bag he took in, Merle recalled as tears clouded his eyes, “they just kicked it away.”

Begay said he’s seen ranchers burn their wool — which is akin to blasphemy in Diné culture — or use it to fill potholes in their roads.

“It’s just getting impossible for ranchers to turn a profit,” Begay said, “when you consider the cost of hay, gas, equipment and all the other things you need.”

The continuing drought isn’t helping. On the Navajo Nation, a proud traditional way of life is becoming little more than an expensive hobby.

Begay was discussing the dire situation with a fellow young churro rancher, Kelli Dunaj of California, and they agreed something needed to be done.

“We needed a way to prop up the price of wool so that it will at least be sustainable,” Begay said.

Dunaj had connections to Fibershed, a California-based nonprofit that supports sustainable regional networks of fiber producers, and Begay, who is also a weaver, counts among his friends several “influencers in the fiber arts world” who had already been approaching him and offering their help.

Over the past year or so Begay and Dunaj hatched a plan to recruit three of the biggest and best churro ranches on the Navajo Nation, buy up their wool, take it to the nonprofit Mora Valley Spinning Mill in New Mexico (which Dunaj called “part of the whole story of wool in the Southwest”), and have it spun into high-quality yarn.

Proceeds from the sale of the yarn will go back into buying fleeces next year to repeat the cycle. Fibershed will help with funding and marketing, and the influencers will spread the word in the fiber arts community.

The first year, the “Rainbow Fiber Co-op,” as the duo calls the project, will be financed by grants and donations, including a start-up grant from the First Nations Development Institute. Within a year or two, they hope to be self-sustaining and possibly bring in more producers.

“We’re not trying to make money,” Dunaj said. “We’re trying to sustain a way of life.” 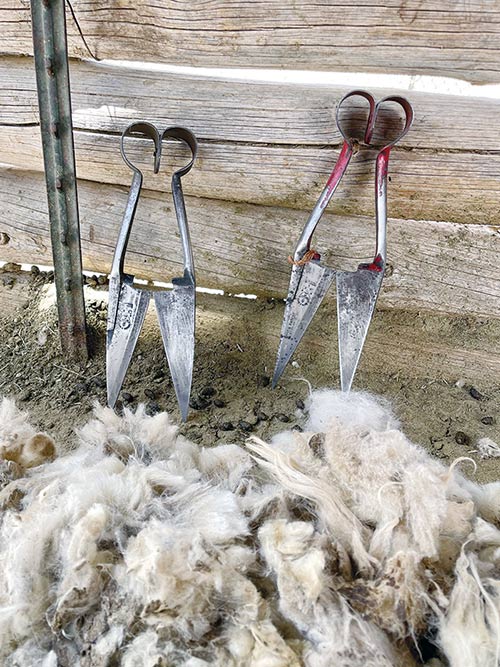 Courtesy photo | Nikyle Begay
Old-fashioned hand shears await their next task at a churro sheep ranch atop the Defiance Plateau.

“As a legally organized co-op, all the shepherds have a say,” added Begay.

So far they’ve raised enough to purchase 3,000 pounds of wool from the co-op members at $3 a pound. It’s less than half what quality churro wool used to fetch, but in today’s nonexistent market, it’s a very fair price.

Irene Benalley of Two Grey Hills, New Mexico, whose brown, white and grey flock used to fetch high prices, was one of the ranchers invited to join the co-op.

“You can’t imagine what I felt,” she recalled of the moment Begay broached the idea to her. “Pure excitement! It was a blessing.”

Daisy, who had been a mentor to Begay when he first started ranching, is another of the founding members. She had one word for how she felt when Begay approached her: “Grateful.”

“You drive around here, you see so many abandoned corrals, abandoned houses,” said Merle, whose family land he and Daisy ranch. “I remember when all those corrals were filled with sheep, and we went from house to house and sheared.”

“Maybe,” mused Daisy, “this co-op is a new way to have that kinship.”