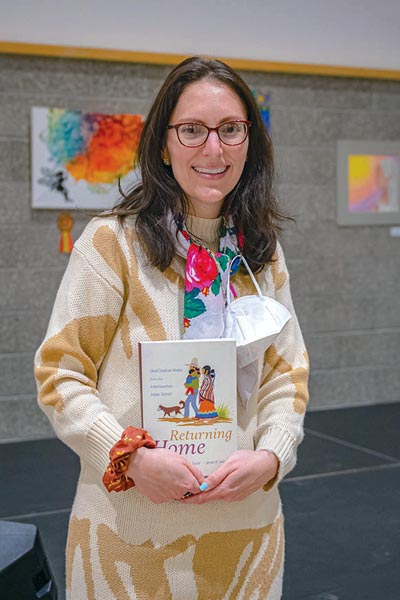 Courtesy photo | Vanessa Tom
Farina King poses with her new book, “Returning Home,” which is a compilation of artwork and poetry from former Diné students of Intermountain Indian Boarding School.

King is Bilagáana, born for Kinyaa’áanii. She was born in Tuba City and grew up in Tuba City, Window Rock and Maryland.

The book contains the artwork and poetry of Diné students, some named and some not, who attended Intermountain Indian School in Brigham City, Utah.

For the first 24 years, the school only housed Diné students before becoming an intertribal school for the remaining 10 years.

King said she wanted to focus on Diné students in her book because the school was founded specifically for Diné students.

King said during her presentation, “We focus more on contextualizing, helping to understand Diné experiences, where the Diné students are coming from.”

He noticed some artwork done by people he went to school with and he thinks the book is a good way to display their work.

King said this book has always been about the alumni of Intermountain throughout the process.

“For me it’s always been about the alumni and meeting them and sharing their stories, their precious stories that they want to tell,” King said.

“I’m not pushing anything or asking for more triggering questions or something,” she said. “What I’ve really seen is by going into community and talking and sharing, people are sharing these stories and are seeking that recognition.”

The people are choosing what they want to tell and are telling the stories they don’t want forgotten, she said.

King and her colleagues are giving a platform to these people and their stories and are not pushing them to tell stories that they do not want to tell.

She said this book has also helped alumni preserve and show their work and the work of their peers.

“It’s really been so powerful of the interactions and engagement I’ve had with alumni,” King said. “We brought to them works that some of them haven’t ever seen or haven’t seen in years and being able to help them have access to their own works or those of their peers.”

During the Rehoboth event, many alumni came up to King and thanked her for preserving their history and to bring awareness to them and their experiences.

She believes that for Native Americans, as a whole, it is important to understand the intricacies and complexities of boarding schools. 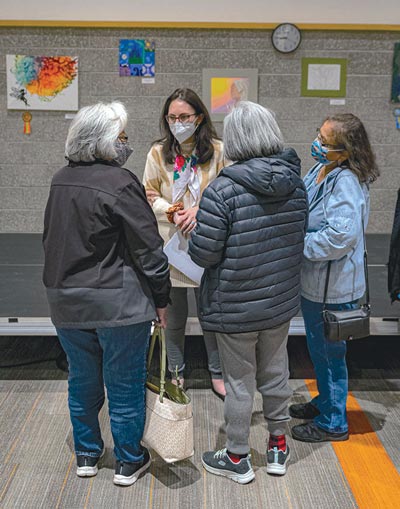 “It helps us to understand our communities, our families, relations, a human experience but especially for Native Americans,” King said. “Boarding school is something that’s become, almost like this embodying Native American experience that there’s so many different ones.”

Federal boarding schools were historically used to assimilate Native people into white society and to try to erase Native cultures across the United States and Canada.

King said this book shows how these students navigated that era and how creative resilience was also a form of resistance.

“For example, these youths, they may not even have fully understood colonialism as students going to Intermountain,” she said.

“They might not have thought of themselves as being colonized or anything,” she said, “but they just were trying to live their lives and people seek joy and what brings them happiness and getting them through life in its hardships and challenges and ups and downs, joys and sadness.”

The book is also about Natives still being here and she believes that it is inspiring to Native people because it is not “just the perpetrator/victim story.”

King gave an example of Jesse Holiday, an Intermountain student whom she calls “shizhé’é yazhí.”

She said Holiday is an incredible artist who shared his work with the traveling exhibit and book.

He told her he never did anything great with his artwork, however, King said he was doing something and his legacy will live on.

“That art, he said, pulled him out when he had hard times,” she said. “And I know a lot of people, we have hard times in the realities of life and world and whatever it is, whoever you are, but especially us Natives having specific experiences.”

The pieces are very inspiring to King and she believes they are needed within the Diné community.

“Just looking at the beauties of the pieces, that also are gut wrenching sometimes and heartbreaking too,” she said. “But we need that, those tears and that angst, as well. And it’s all there in these works and in us including it and featuring it.”

King said her favorite thing about working on this book was working with the community and developing relationships and friendships.

“My first book was a whole different project but this one, it all began with the community,” she said. “It began as a traveling exhibit so it was doing the best we could to get these creative arts accessible, like amongst Diné communities and Native American communities.”

She said she had many partners throughout this project and it was unlike anything else she has ever done.

“This love and compassion and empathy that we form in these relationships, that’s been really powerful in this (project),” King said.

“One woman, she was crying and talking to me, saying how she felt her childhood was robbed,” she said. “Just to be there and to, like, cry with them and to listen, I don’t know when they ever get opportunities to talk about that.”

King spoke about her favorite piece of work that is included in the book. The piece is a poem by Henry Tinhorn called “Mountains Lament.”

In King’s first book, “The Earth Memory Compass,” she discusses how in Diné history there are many “different attacks to disintegrate Navajoness through these eurocentric, American, colonizing machines of schools.”

These boarding schools specifically targeted the spiritual aspects of Diné culture, she said.

However, through all of these trials she found perseverance and resilience.

“It’s incredible of that earth memory compass, of like the sacred four directions and the embeddedness of and connection of land and peoplehood for Diné,” King said. “Seeing that Henry Tinhorn’s poetry was in this poem, especially.”

She said the poem is written in English but it is like Tinhorn is speaking Diné Bizaad through the words.

In the poem Tinhorn speaks about the mountains crying, longing for their children, and wondering where they went within the homeland.

The mountains then ask the sky where the children went and the sky only rains in response.

“There’s so much symbolism there but especially for Diné, Tó iina and sihasin is that renewal of rain,” King said. “Water is beautiful and life and rain is not something to be afraid of or to see as only darkness.”

The poem resonated with her because of the hope, the mixed emotion of the poem, and the connection of Diné land and peoplehood.

King said healing from the history of boarding schools can only be done through community and to listen to the alumni.

“This is ongoing work and is only possible when people come together,” she said. “Through everyday people, anyone just being willing to listen and support alumni and families and to care and to do something about it.”

When a person has traumatic experiences, you do not just leave them there, she said.

“I think people can help by showing alumni they’re not alone and the respect and humility to learn from them,” King said. “See what they need, not just telling them what they need but listen and understand the stories.”

One way to help the alumni of Intermountain is to donate to the group for their reunions because King said they have been pushing for gathering to bring awareness to the school and their experiences.

“All has been shaped by these kind of policies that were genocidal, another way of trying to terminate and wipe out a people,” King said.

“If people really want to say, ‘move on,’ OK, then let’s move on in healing, that’s what I say. It takes work, it’s not something you just put under the rug or put in the closet.”